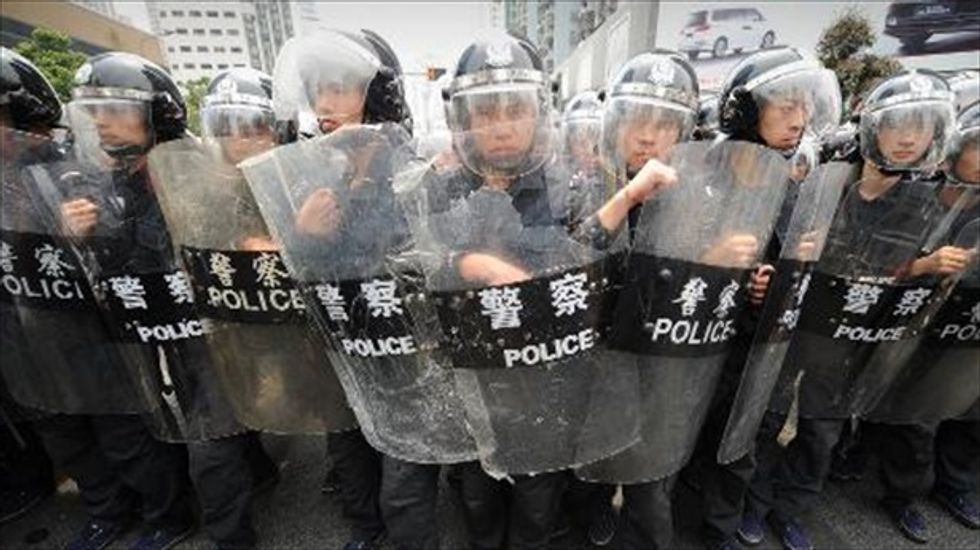 A line of riot police stand in the southern Chinese city of Shenzhen on Sept. 18, 2012 [AFP]

China has detained two Hong Kong journalists for operating an "illegal publication", the authorities said, as the mainland tightens its grip on the more freewheeling press inside the semi-autonomous Chinese territory.

Police in the southern city of Shenzhen posted a statement late Friday on Weibo, China's version of Twitter, saying that "several" people, including two Hong Kong residents, had been arrested.

"On May 30, in accordance with a tip-off from the public, the Shenzhen Public Security Bureau apprehended a group of suspects operating an illegal publication," the post said.

The two men were identified only by the surnames of Wang and Guo in the statement, and are believed to be journalists working for magazines that deal in mainland Chinese political gossip sold in Hong Kong.

The magazines are widely available in the former British colony, which has greater freedoms than the mainland under agreements signed with Britain during the 1997 handover.

It was not immediately clear if the illegal publication mentioned in the authorities' Weibo posting referred to the magazines.

Another newspaper, Apple Daily, identifies the men as Wang Jianmin and Guo Zhongxiao, and said they had worked for Hong Kong-based weekly Yazhou Zhoukan.

The Hong Kong government would not comment on the arrests, only saying it "had not received requests for assistance."

Amnesty International said last month that the erosion of press freedom in Hong Kong is a cause for deep concern, referring to a series of attacks on journalists in the city.

Two senior figures from the Hong Kong Morning News Media Group were attacked in March, weeks after Kevin Lau -- a former editor of the liberal Ming Pao newspaper -- was critically wounded in a savage knife assault.

The developments also came as China is set for the 25th anniversary of the June 4 military crackdown on pro-democracy protesters in Tiananmen Square, during which hundreds of people were killed -- by some estimates, more than 1,000.

China censors any mention of the crackdown and has ramped up already strict controls ahead of the anniversary, but it is not known whether the arrests were related.

In May, Hong Kong publisher Yao Wentian, who has published politically sensitive books that were banned in mainland China, was jailed for ten years for smuggling.