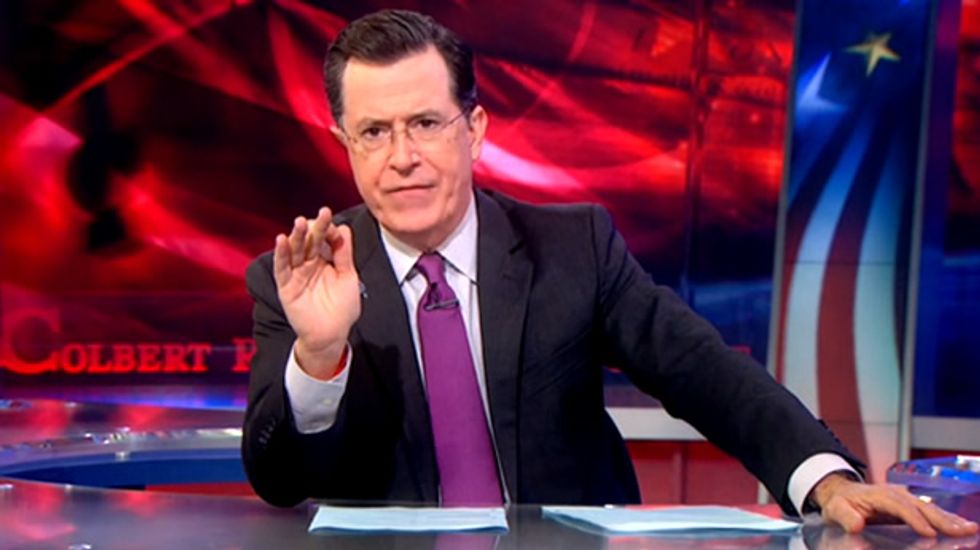 On last night's Colbert Report, Stephen Colbert used "The Word" segment to attack the de facto debtor's prisons that have sprung up across the United States.

He began by noting that "America puts more of its citizens in prison than any other nation. But confining so many Americans comes at a terrible price -- which, it turns out, is money."

"Fortunately," Colbert continued, "there's a way to shiv some of those costs in the kidneys. Folks, our justice system has found so many ways to cut corners."

"First, by eliminating non-essentials. For example, governors in Utah, Idaho, Texas, Indiana, and Arizona have refused federal funding for the Prison Rape Elimination Act. That reminds me of the old joke," Colbert said. "Two prisoners are in the shower, and one of them drops a bar of soap, so what the other guy says is, 'What's about to happen is fiscally irresponsible to prevent.'"

"But the savings don't stop at not preventing sexual assault -- there's also cheap labor. The New York Times reports that 'the federal government...is relying on tens of thousands of...detained immigrants [to] work...detention centers...cooking meals, scrubbing showers and buffing hallways...usually for $1 a day or less.'"

"'Some immigrants...are paid with...candy bars,'" he added. "Now, I know that sounds bad, but their next Payday could be 100 Grand. It makes sense -- they come to America to steal our jobs, so we arrest them, then force them to do our jobs."

"But it's not just enough to save money," Colbert continued. "Prisons need to turn a profit. After a year-long investigation, NPR has found that 'in at least 43 states...defendants can be billed for their public defender...their own probation and parole supervision...for the electronic monitoring devices defendants and offenders are ordered to wear...and room and board for jail and prison stays.'"

"And the best part is, these fees are self-sustaining investments," he said. "It's a great system. If a defendant can't pay a fine or fee, they go to jail, where they'll rack up more food and bordering fees that they can't pay, and be penalized by more jail time, thus increasing their debt, which gives them even longer prison sentences."

"You know what they say," Colbert concluded, "'Don't do the crime if you can't do the time, or if you don't have a dime, which is a crime, resulting in more time.'"

Watch the entire June 11, 2014 episode of The Colbert Report below via Hulu.