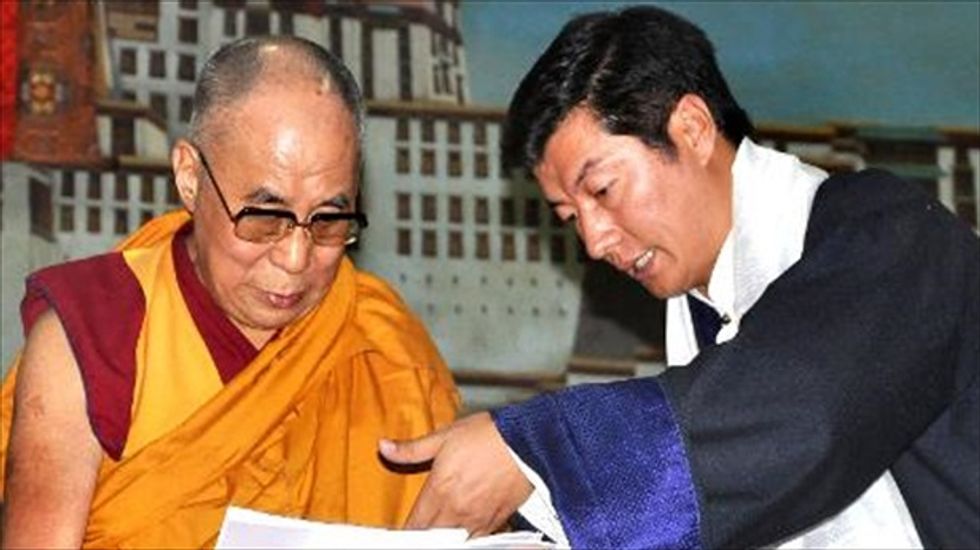 The Dalai Lama (L) and Tibetan Prime Minister Lobsang Sangay at the launch of a new campaign for Tibetan autonomy in Dharamsala on June 5, 2014 [AFP]

The leader of Tibet's exiled government accused China Thursday of blanket repression in his homeland and warned that resentment over its rule was growing as he launched a new campaign for autonomy.

Speaking as he and other senior exiles, including the Dalai Lama, renewed their push for a "Middle Way" of peaceful autonomy within China, Lobsang Sangay called for more international help for the Tibetan cause.

The Dalai Lama, who is the spiritual leader of the Tibetans, said there was no shortage of commitment from the exiled leadership but added that patience was needed to produce results.

Sangay took over as the political leader of the Tibetan cause in 2011 when the Dalai Lama -- a Nobel prize-winner who has long been accused by China of being a dangerous separatist -- pared back his roles.

But Beijing has continued to resist calls by US President Barack Obama and other Western leaders to resume talks with Tibetan officials on autonomy that broke down four years ago.

"We advise these people to give up their attempts to separate Tibet from China," foreign ministry spokesman Hong Lei told reporters on Wednesday.

China has governed Tibet since 1951, a year after invading, and considers the Himalayan region an integral part of its territory which has prospered under its rule.

The Communist Party government held nine rounds of dialogue with the Dalai Lama's envoys from 2002 to 2010 but the process produced no visible results.

Rattled by a wave of self-immolations that have highlighted the sense of desperation among Tibetans, the exiled government has become increasingly exasperated by the impasse which it sees as radicalising their cause.

Sangay said that of the 130 Tibetans who had set themselves on fire to protest against Chinese rule, 112 had died.

"This is the most drastic form of protest," he said.

Although the Dalai Lama has officially relinquished his political role, he was on hand for Thursday's launch when he was presented with documents and a video from Sangay.

"(But) they will carry on the campaign with fully fledged commitment."

In comments published on the eve of the launch, the Dalai Lama again infuriated China by urging it to embrace democracy as he marked the 25th anniversary of the Tiananmen Square crackdown in Beijing.

He also offered prayers for the hundreds of people -- by some estimates, more than 1,000 -- who died on June 3-4, 1989 when Communist authorities sent in troops to crush their peaceful pro-democracy protests.

His comments produced a spiky response, with Chinese foreign ministry spokesman Hong Lei countering that "his statement has ulterior motives".

While there is little sign of a softening of China's attitude towards the Dalai Lama, Sangay -- a Harvard-educated scholar who has never visited Tibet -- is aware that his predecessor's star power remains unrivalled.

Sangay is also trying to lobby for more support from India which has hosted the exiled leadership for the last six decades.

Sangay said he hoped China would "learn a lesson" from India's embrace of ethnic diversity."The Chinese government should learn a lesson and hopefully look at Tibetans and treat Tibetans the way the Indian government does (treat) different ethnic and linguistic groups."

Among those in Dharamsala was a Tibetan monk who managed to cross the border into India after he was allegedly beaten over a three-week period by Chinese police following his arrest in 2012.

Sonam Rapgha said he was tortured daily after his arrest for having the wrong visa in Chamdo region in Tibet where he travelled from India to visit his mother.

"I thought I was going to die. Almost every day I fell unconscious from the beatings and I was scared," he told AFP from his monastery.

Rapgha, who now suffers from kidney disease, said police accused him of trying to spread disharmony in Tibet, before finally releasing him at the Nepal border.

Another monk said 56 people alone from his home district of Amdo Ngaba in Tibet had self-immolated since 2009 including monks, teenagers, farmers and businessmen.

Kanyag Tsering said he had collected the figures during phone calls and other contact with family and friends back home.