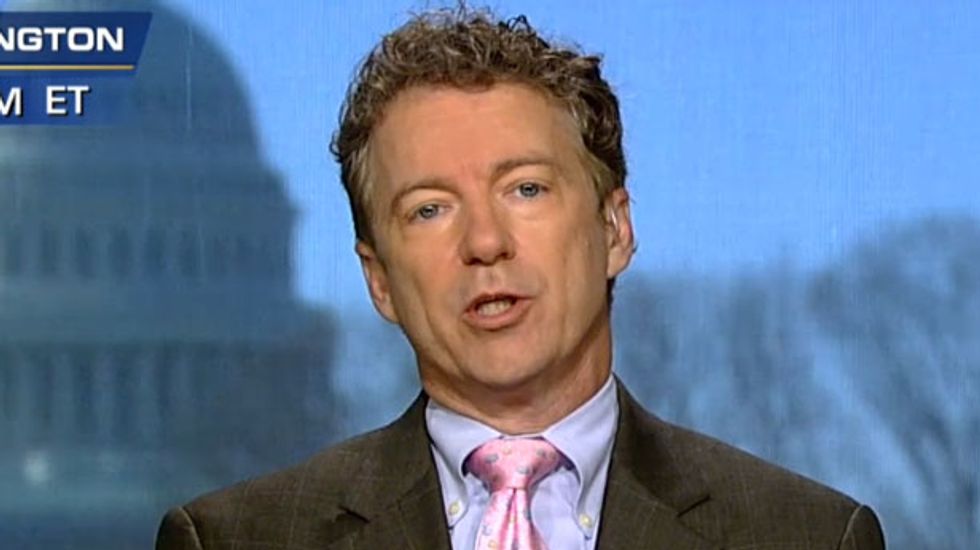 According to The Hill, the libertarian-leaning Paul was talking to Fox News' Your World with Neil Cavuto when he said that if the ex-Guantanamo prisoners are caught plotting against the U.S., "I would say that there would be a drone with their name on it.”

In March of 2013, Paul led a one-man filibuster against the use of drones by the Obama administration.

For nearly 13 hours, the son of retired Rep. Ron Paul (R-TX) blocked the Senate's effort to confirm Obama's nominee for CIA director John Brennan. The younger Paul said that the nomination would not go forward until he received a written statement from the president or Attorney Gen. Eric Holder pledging never to use drones for targeted killings on U.S. soil.

He was joined in his efforts by several Republican colleagues and was applauded even by liberal writers like Glenn Greenwald and David Sirota.

However, less than a month after his filibuster, Paul endorsed the use of drones in pursuit of domestic criminals.

"If someone comes out of a liquor store with a weapon and fifty dollars in cash, I don’t care if a drone kills him or a policeman kills him," Paul said in an interview with Fox News.

"If there’s a killer on the loose in a neighborhood," he said, "I’m not against drones being used to search them out, heat-seeking devices being used, I’m all for law enforcement. I’m just not for surveillance when there’s not probable cause that there’s a crime being committed."

Paul, who has aspirations of being the Republican Party's nominee in 2016 opined on Friday that President Barack Obama didn't go a "great" job on the exchange of five high-ranking Taliban operatives for Sgt. Bowe Bergdahl.

The senator said that if he were president, he would not engage in these kinds of deals with enemy forces, "I don't think so," he said. "I can't imagine a circumstance in which I would.”

The Hill noted that the administration has apologized to Congress for waiving the notification requirement, citing Bergdahl's rapidly deteriorating health as its reason for acting swiftly and in secret.