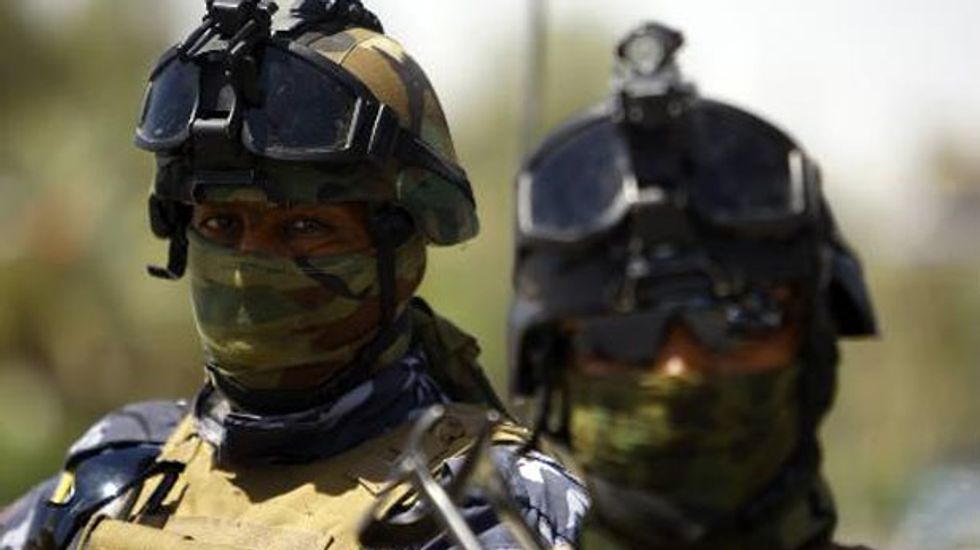 As Iraq's security forces press a counter-offensive against militants who have captured a swathe of territory, doubt remains over whether or not they can retake major cities.

Soldiers and police retreated en masse as militants -- including the jihadist Islamic State of Iraq and the Levant (ISIL) -- swept into Iraq's second city of Mosul a week ago, leaving vehicles and even uniforms in their wake.

Their departure allowed militants to secure surrounding Nineveh province, before sweeping into neighbouring Kirkuk and Salaheddin provinces, seizing territory there and in Diyala.

Their retreat, despite their vast numerical advantage, is the result of what experts say are myriad problems, ranging from lacklustre training and low morale, to corruption and an atmosphere of simmering sectarianism.

Now, officials are trumpeting a counter-offensive, though successes have been limited so far.

Iraq's army has been shaped by the United States' decision to disband the forces of now-executed dictator Saddam Hussein following the 2003 invasion.

That gutted the army of experienced men, and created a mass of angry well-trained former personnel, some of whom are now believed to be involved in the militant advance.

"This army is not a mature force," Anthony Cordesman of the Centre for Strategic and International Studies said of Iraq's current forces.

De-Baathification, the process in which some members of Saddam's regime have been barred from positions in Iraq's new government, meant "very good people were either blocked from entering the service or forced out or denied promotion."

The problem was exacerbated, he said, when Washington and Baghdad failed to agree a deal leaving US military trainers in place, and US forces withdrew completely at the end of 2011.

The army was "rapidly trained, only some of them have been brought into combat and there was a very erratic structure because when the US left it had planned to be there... for another two years."

He also cited corruption throughout the army, from recruits buying jobs and paying for promotions, to Prime Minister Nuri al-Maliki appointing senior officers "loyal to him, regardless of competence."

Though more than half a million strong, Iraq's security forces had struggled to combat a surge in militant violence in the past year, even before the swift assault this month.

Near-daily attacks plagued Baghdad and much of the north and west of the country, with victims of unrest often blaming members of the security forces for negligence or collusion in the wake of violence.

"This has resulted in a lot of them getting killed, while morale has been slowly eroded. However, it hasn't given them a lot of actual fighting experience."

ISIL, by contrast, grew from Al-Qaeda's Iraq affiliate before it was repudiated by leader Ayman al-Zawahiri, and can draw on recent experience across the border in Syria and long years of insurgency in Iraq.

Ayham Kamel, Middle East and North Africa director at the Eurasia Group think-tank, said an increasingly sectarian atmosphere in the country probably affected morale within the security forces and played a role in the desertions in Mosul.

Maliki, a member of Iraq's Shiite majority, has been accused of repressing the Sunni Arab minority, including politicians and protesters.

Meanwhile, Shiite neighbourhoods of the capital have faced a relentless wave of bomb attacks by Sunni militants.

In Sunni-dominated Mosul, those tensions meant some Shiite troops felt it was not worth trying to tackle the militants, Kamel said.

"It's not an environment in which the soldiers were necessarily eager to fight. The local community didn't welcome the army.

"Shiite soldiers felt that they were too far away from home, had not been home for a while, and were dying on a daily basis for a city that they felt very little attachment to," he said.

Sunni forces, by comparison, in some cases appear to have colluded with the advancing militants, Kamel said.

"They reached deals where they ripped off their military uniforms, handed over their weapons and were allowed to leave," he said.

But the scale of the exodus from Mosul, with both security forces and tens of thousands of civilians fleeing, suggested something of a "snowball effect," Drake said.

"Low morale, significant fear of the ruthlessness of the ISIL and evident awareness of how strong their presence already was... simply prompted a mass movement when the attack came."