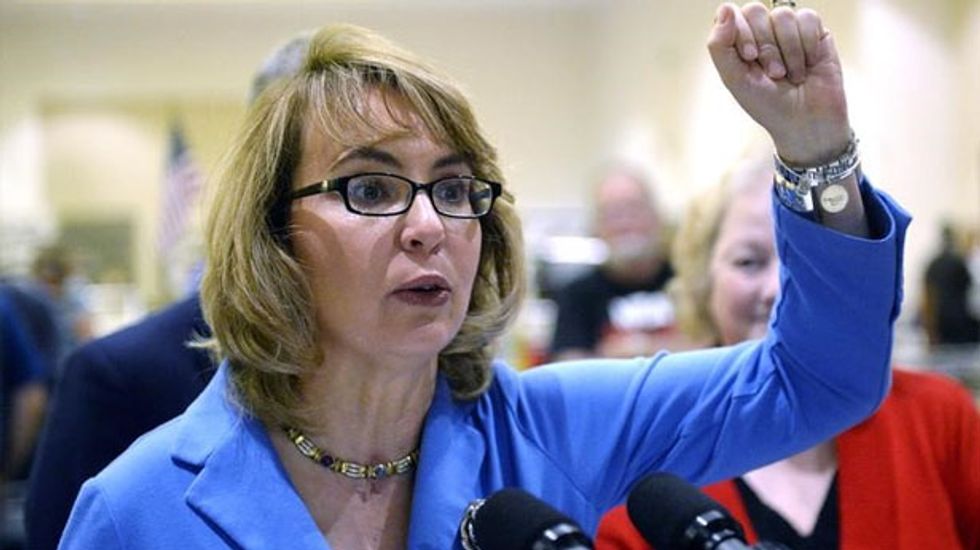 Giffords spoke of the risks that women face from domestic violence and stalkers as she called for increased background checks for gun owners.

After she was shot in the head during a rampage in Tucson, Arizona, in 2011, Giffords recovered but was left with injuries including a limp and a partially paralyzed right arm.

Giffords' husband, Mark Kelly, who appeared with her at the panel event, mentioned that the couple own guns themselves, but they back increased background checks to "keep guns out of the hands of those who will stalk and abuse it."

In April 2013, a handful of Senate Democrats joined Republicans to block a bill that would have expanded background checks to online and gun-show sales just four months after a mass elementary school shooting in Newtown, Connecticut brought gun control issues back to the public debate.

The National Rifle Association gun rights lobby group had warned lawmakers that the background checks would lead to a national registry in requiring checks for sales and gifts between family and friends.

Democratic Senator Amy Klobuchar, who participated in the panel with Giffords, last year introduced a bill that would prevent people convicted of stalking or who have a restraining order against them from purchasing guns. The legislation would also expand the definition of domestic violence to dating partners, who Klobuchar said are often excluded.

During the panel, Sarah Engle of Wisconsin told of a former boyfriend who shot and killed her mother in 2008 after holding Engle hostage for a night, raping her and shooting her in the head.

"I’m living proof of how important it is that we do everything we can to keep guns out of the hands of domestic abusers," Engle said.

Gun violence against women has been in the news after a shooter in Isla Vista, California, killed himself and six others and wounded 13 near the campus of the University of California at Santa Barbara in May. Shooter Elliot Rodger had emailed plans to several people beforehand, stating his intention to get revenge on women for rejecting him.