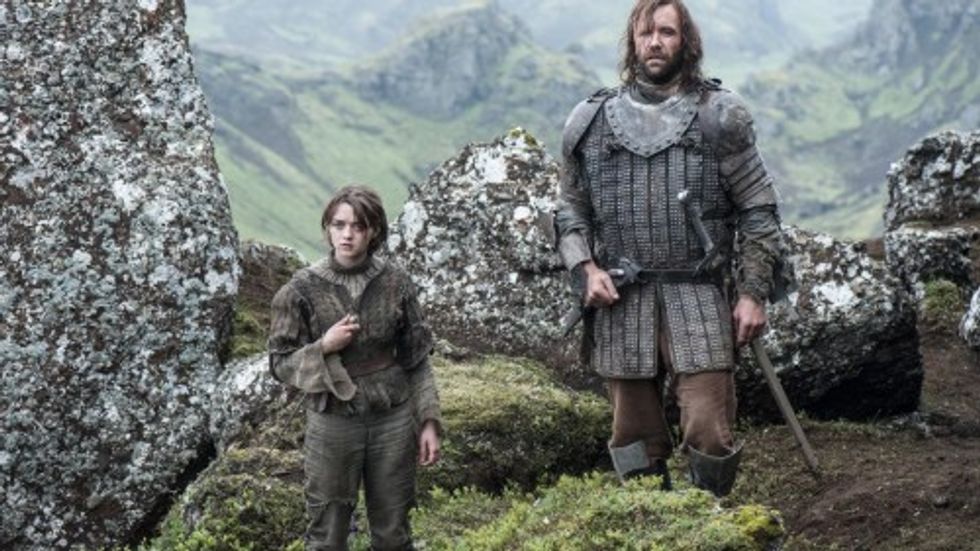 As per usual when I do this, this isn't a recap of Game of Thrones and I recommend reading Scott Kaufman instead for that. Instead, I want to talk about themes. In an episode called "The Children", the theme of being a child and having a parent was clearly a big one. But on a deeper, more subtle level, this episode really was the introduction of a theme that book readers know will become a bigger and bigger deal as the story goes on: The question of what identity means and how, exactly, people determine who they are. Are we who our parents say we are? Our communities? Do we determine who we are for ourselves? Is there an "authentic" self that constrains who you can be---are we even trapped by destiny? Or can we reject our given identities and follow a different star?

Every major character who has a storyline this week asks him or herself a variation of that question, and different answers are given for each. Dany's story, which causes me all sorts of grief because it's just so sad, is another example. As Scott notes, she's the "breaker of chains" and yet there she is, locking her dragon-children in chains. I can't even with that. It's just so heart-breaking. Same story, books. The fact that Dany feels the need to lock her own dragons up in this way makes me want to throw things, though obviously there's not really much else she can do at this point in time. Anyway, identity crisis, for sure.

Jon is the most obvious, another riff on his parentage and his invoking his father, Ned Stark, in order to ingratiate himself with Stannis Baratheon.*

Indeed, at this point in the story, all the living Stark children, except Rickon, have basically reinvented themselves. The battle over Arya Stark---invented for the show---was just so well-done for this reason. Brienne's arrival means Arya has a choice. Does she go with Brienne, which amounts to reclaiming her identity as "Arya Stark", an identity she's been concealing now for years? Or does she walk away from it all? The Hound's little speech about how there is no safe place is the important thing here. Without her family, is Arya Stark really Arya Stark? Apparently, she believes not, as she walks away, abandoning not just any attachment to possible remaining family members but to Westeros itself.

There's a secondary discourse about Arya and identity, as well, in her brief discussion with Brienne about being able to break free from fathers telling them than their gender is a trap from which there is no escape. Both Brienne and Arya reject that claim, and both live lives that suggest that a measure of freedom is possible if you fight for yourself.

Bran is an interesting counterpoint, as it seems he really doesn't have a choice so much as a destiny. But it's clear that whatever his destiny is, he seems to have permanently abandoned any hope of returning to Winterfell and taking his role as the lord of Winterfell or, even, the King of the North.

We don't see Sansa in this episode, but it's well worth remembering she is going by the name Alayne Stone, as far as most people are concerned. Just a few lords of the Vale and Littlefinger know otherwise, and she's even covered up her red hair to hide herself even further.

The Lannister children also confront the concept of "identity" in this episode, though in a much different way, by challenging Tywin Lannister's long-standing belief that the individuals in the family should be subsumed to their role as "Lannisters" and to submit to the tyrannical patriarchal authority he enforces on their lives. Each one, in turn, finds a way to finally extricate themselves from Tywin's control over their lives and assert, instead, that they are autonomous people. Granted, Cersei does it in the grossest way imaginable, by treating her incestuous relationship with Jaime like it's an act of revolution, but it's a testament to what a monster Tywin is that I was cheering her on. Jaime, of course, defeats Tywin quietly by helping Tyrion escape. And, of course, there's the final act of rebellion, Tyrion's patricide.

The conversation between Tyrion and Tywin before Tyrion murders him is really a marvel, riffing wonderfully on all these issues of identity and meaning. Throughout their relationship, they've had this ongoing discourse about whether or not Tyrion is an authentic son of Tywin's, a dialogue that continues here, with Tywin alternating between trying to placate Tyrion by claiming him as a son and when that doesn't work, trying to bully him by denying that he is his son. Tyrion gets the last word by saying that he is, in fact, his son, and proves it by taking a Tywin-like action, which is ruthless murder of an unarmed man. But I feel the question is not actually resolved, and Tyrion will continue to struggle with the question of what it means to be a Lannister, and whether or not he can rise above it.**

There is also the secondary question of what a "whore" is and what it means to be one. Tywin clearly believes "whore" to be a category of people that is subhuman, there to be used as toys instead of regarded as people deserving of love and respect. Tyrion disagrees, no doubt in part because he realizes many people think the same of him for being a little person. It's the discourse over identity distilled to its purest form, with Tyrion realizing---and killing his father because of this realization---that "whore" is a designation given in order to steal away someone's right to love and dignity. I'd take it a step further and argue that everything odious and shameful about Shae, particularly the way she betrayed Tyrion, is a direct result of her being labeled a "whore" from an early age. The label is a trap from which she could not escape, and all her choices are constrained by it. She briefly tricked herself into believing that Tyrion's love for her would mean she could escape her fate, but when ran her off by calling her a "whore"---i.e. putting her in her place---she basically reverted to type. "Whore" is her box, and all her choices, no matter how repulsive they may seem to the rest of us, are a direct result of her not having any choices outside of that box.

And so this is how the show ends, with a question: Can you escape your identity? Is reinvention possible? Or are you doomed to live out the life assigned you at birth when you were given your name? Different characters come to different conclusions. And I suspect season five is going to dive deeper into these questions.

*SPECULATION SPOILER. As avid fans usually know, the prevailing fan theory is Jon is not Ned Stark's son, but in fact the son of Rheagar Targaryen and Lyanna Stark. I believe that meaningful look Melisandre gives him is confirmation of that. She's always looking out for someone with king's blood, after all. So magic. Wow.

**SPECULATION SPOILER. There is, of course, the fan theory that Tyrion is not Tywin's son, but the bastard child of the Mad King and Tywin's dead wife. This entire scene will end up being major fuel for that fire.