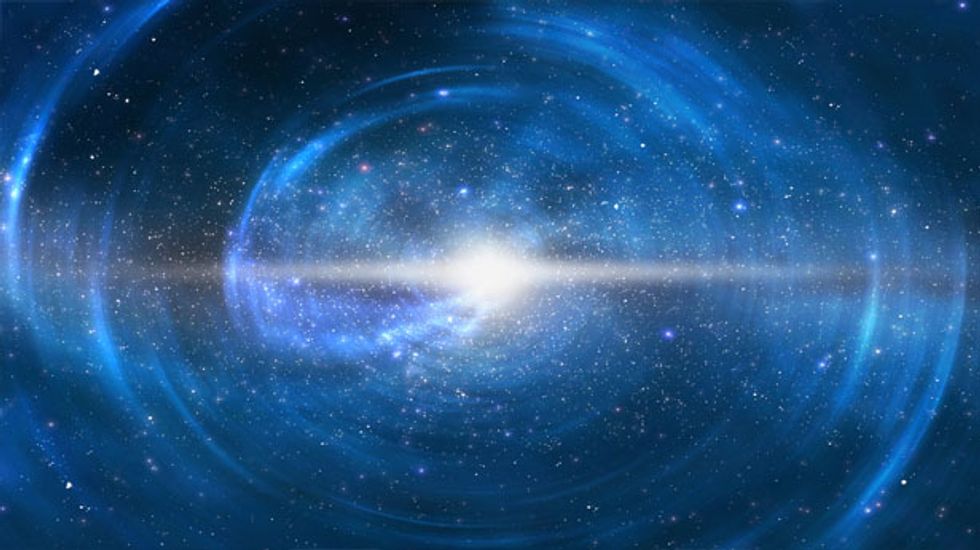 ["Star Explosion In A Galaxy Of An Unknown Universe" on Shutterstock]

It was hailed as one the most important scientific discoveries of the century, the birth of a new era in physics and a shoe-in for a Nobel prize.

The claim from Harvard University that it had discovered gravitational waves – and thereby evidence for the theory of cosmic inflation and the existence of a multiverse – caused a worldwide sensation in March. But the celebrations are now looking decidedly premature. Rather than securing a trip to Stockholm to receive a Nobel medal, the Harvard team may have detected nothing more than space dust.

Writing in the journal Nature on Wednesday, Paul Steinhardt, director of the Centre for Theoretical Physics at Princeton University, argues that the Harvard team made an unfortunate blunder in its calculations. "Serious flaws in the analysis have been revealed that transform the sure detection into no detection," he writes.

Cosmologists working on Harvard's Bicep2 (Background Imaging of Cosmic Extragalactic Polarization) telescope at the south pole unveiled their surprise discovery at a press conference at Harvard, before they had published their results in a peer-reviewed journal. The purpose of independent vetting by peer reviewers is to catch flawed studies before they become part of the scientific literature.

Led by cosmologist John Kovac, the Harvard researchers said they had spotted a twist in the ancient light that lingers in the universe from the time of the big bang. This polarisation, they said, was evidence of gravitational waves, or ripples in space-time predicted by Einstein's 1916 general theory of relativity.

According to the Harvard group there was a one in two million chance of the result being a statistical fluke. But within hours of making the announcement, scientists began to raise concerns. The criticisms have been building up steadily on physics blogs ever since.

Steinhardt now claims that a new and independent analysis casts serious doubts on the Harvard results. The study, led by David Spergel, also at Princeton, found that the same patterns of light seen by the BICEP2 telescope could be the work of ubiquitous space dust.

Ultrafine grains of dust in space absorb visible starlight, an effect that gives the stars a slightly red tinge. But the grains quickly re-emit the light, as infrared radiation or at wavelengths more similar to radio waves. The uneven shape of the dust grains means they polarise light, twisting the direction in which the light waves oscillate.

"What they have seen is what you would get from dust alone," Spergel told the Guardian from an astronomy meeting in Boston. "Dust could explain their results entirely." That demolishes the Harvard team's claims of a discovery, he believes. "They can no longer make the claim that they have made a definitive measurement of gravitational waves. I think they should withdraw the claim of detection." The Guardian was unable to reach Kovac for comment.

According to Spergel, the Harvard researchers erred when they digitised a Powerpoint slide shown at a conference by a rival team searching for gravitational waves. The slide showed preliminary data from the European Space Agency's Planck space telescope on how dust polarises light in space. What the Harvard scientists missed was that the slide averaged the effects of dust in the Milky Way and dust far beyond our own galaxy. That led them to underestimate how much space dust naturally twists light.

Spergel, who said Harvard was "aggressive" in publicising the discovery, said it will take more data from Bicep2 and other experiments, such as Planck, to be sure whether the Harvard team has seen the first signs of gravitational waves, or was fooled by the effects of space dust.

Despite the grave doubts cast over the results, Pedro Ferreira, a cosmologist at Oxford University, said he was still hopeful the Harvard team was right. "There's a strand of us that choose to be optimists, that they have a real signal," he told the Guardian. "There is a worry that we're looking at dust, and not at gravitational waves, but I'll really only be convinced with new data. From the first moment we were all worried about dust. It's not rocket science," he said.

Writing in Nature, Steinhardt argues that if and when cosmologists find more convincing evidence for gravitational waves, they should publish their findings before making a formal announcement. "If there must be a press conference, hopefully the scientific community and the media will demand that it is accompanied by a complete set of documents, including details of the systematic analysis and sufficient data to enable objective verification," he writes.

["Star Explosion In A Galaxy Of An Unknown Universe" on Shutterstock]