Have you considered screaming and running away? 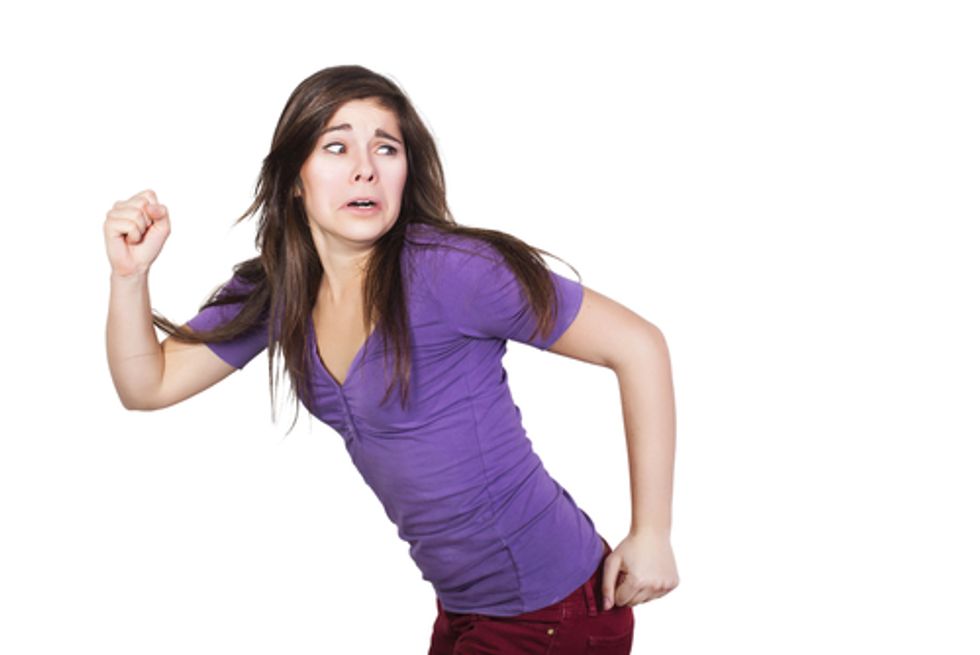 Well, ladies? Have you considered all your options in rape prevention?

So I wrote a post explaining that Miss USA's response to a question about sexual assault, in which she focused strictly on the idea that women need to be "aware" so they can defend themselves, is a problem because it feeds into this larger tendency to see rape prevention as a woman's responsibility. I pointed out that it's clear that when rape prevention is framed mostly as a woman's responsibility, then, if a rape happens, it follows naturally that it is the woman's fault. If we set the bar at "you must learn taekwondo", then anyone who doesn't bust out martial arts moves to accompany her "no" to sex will be accused of consenting. This isn't speculation. I prove the point in the same post by pointing out that George Will basically suggested that women are assumed to be consenting even if they say no, as long as they don't use violence to back up that no.

Of course, I was immediately and unfairly accused of claiming that women should not self-defend, that I was somehow saying that, even if you have an opportunity to fight back safely, you shouldn't take it. That is asinine, and amply covered in a panel I was on for Huffpost Live.

It was surreal having people try to provoke me to debate how women "should" respond to being sexually assaulted. Nearly all of them had never been in that situation, so they were clearly just thinking of "sexual assault" as a scene in a movie, and struggle to tell the difference between bullshitting with your friends about what decision you'd make if you were a character on Game of Thrones and second-guessing what actual people do in the real world.

What they fail to understand is that the entire discourse about women and self-defense is based on a premise I reject out of hand: That women were born yesterday. You know what kind of massive asshole you sound like when you say, "We need to teach women that one strategy they can employ when a rapist attacks is to try to fight him off!"

If you float self-defense as a serious solution to rape, you are, and make no mistake about this, arguing that women are literally too stupid to consider that a rapist might give up in some circumstances if she makes it painful for him to continue. I reject out of hand the idea that women are this stupid. Even illiterate animals understand this. Babies who can't talk understand this. Indeed, it's arguable that fighting back is less of a learned response than an instinctual one. To offer "self-defense" like it's some kind of insight is to assume that women are not only not human, but that they may not even be sentient animals with an instinct for self-preservation.

That's why it's so insulting. Every single woman who has ever been attacked considered self-defense. I will say this with confidence. Rapists, as I point out in the Huffpost Live segment, also know that self-defense is a real threat, so they try to rape in ways to minimize the chance of it happening. They attack women they know, realizing that it's harder to kick and hit someone you, just a couple minutes before, thought of as a friend. They go after women who are incapacitated. They try to create situations that are confusing enough that the victim is second-guessing herself. (Even these women considered self-defense. But if the rapist is playing the "I thought you were consenting" game, then it's understandable that the victim might hesitate to kick him in the nuts.) They make it clear to the victim that her choices are get raped quickly and with minimal injury or put up a fight and get the shit kicked out of her. There are a number of reasons victims don't get all kung fu on rapists. But they all think about it. (Also, not to put too fine a point on it, but successful self-defense still means you were the victim of an attempted rape, getting us back to the real problem, which is there are rapists out there attacking women.)

To get a full idea of how insulting it is: Imagine if, every time the subject of rape came up, someone interejected and said, "What we really need to do is teach women to scream and run away! He can't rape you if you're running!"

Or worse, if asked about rape you said, "Well, as someone who has taken up running triatholons for a living, I think it's important for women to know that if a rapist comes at you, running is a helpful option!"

You would sound like a massive asshole who assumes that women, as a group, wouldn't know how to breathe in and out if some asshole didn't pompously instruct them how to do it. Welp, I hate to tell you this, but the "Have you considered hitting him and trying to escape?" gambit is not any different. It only feels different because you struggle to understand that TV isn't real life and we are not all actually capable of turning into Buffy the Vampire Slayer.

More to the point, it's framing rape as a matter of a woman's choices in order to avoid discussing the actual choice that actually matters, the choice to rape. You know, the rapist's choices. At best, it simply evades discussion of what we can do to discourage the choice to attack women in the first place. At worst, it frames rape as a woman's failure and puts the blame on her, allowing the rapist to evade all blame.

And no matter what, it makes the person suggesting it sound like they think women are too stupid to breathe. Which is sexist and it's time to cut it out.