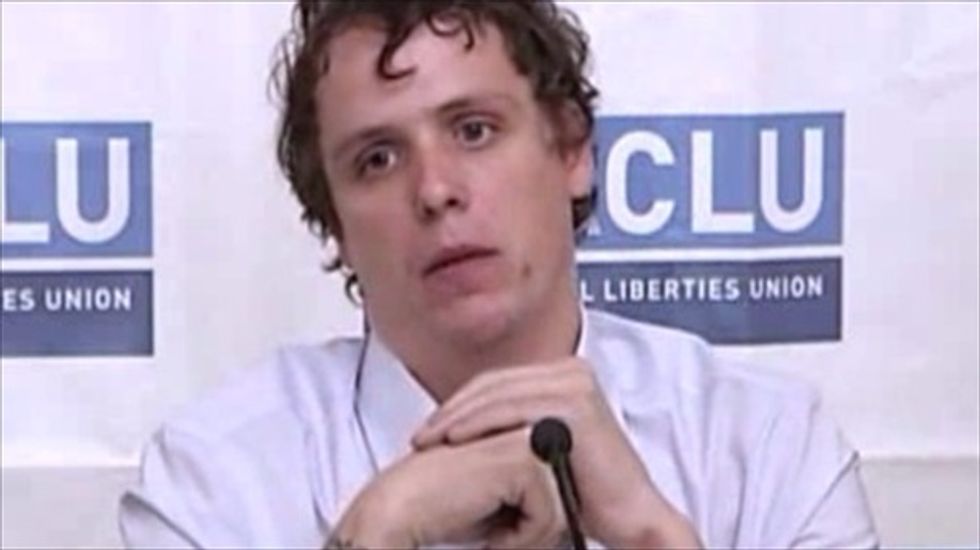 A Peoria, Illinois man sued his local mayor for ordering a police raid on his home in response to a Twitter account mockingly portraying the official as being preoccupied with alcohol and strippers, WGN-TV reported on Friday.

The plaintiff, 29-year-old Jon Daniel, identified himself as the creator of @PeoriaMayor in a press conference on Thursday, saying he did so as a joke originally intended to be read by himself and his friends.

"The moment I thought that they were getting 10, 15 followers that weren't my friends, I put 'parody,'" said Daniel, who is being represented by the American Civil Liberties Union (ACLU). The account, which was created this past March, added the descriptor shortly before being suspended, by which time it had around 50 followers.

The Chicago Tribune reported that when police raided Daniel's home in April, they were instructed to search for not only electronic devices capable of posting to the account, but "cocaine, heroin, (or) drug paraphernalia." One of Daniel's housemates, Jacob Elliott, was subsequently charged with possession of marijuana.

Daniel, who was not in the residence at the time of the raid, spoke with police later that night but refused to answer questions without an attorney present. He was not arrested.

There was little evidence that anyone thought the statements coming from the account -- which contained references to "[doing] some lines on the roof" of the Peoria Civic Center and "tequila and strippers" nights -- actually came from Ardis, a Bradley University instructor told the Peoria Journal-Star.

"No reasonable person is going to read [the tweets] and think that's what the mayor of a fairly large-sized city is going to say online, in public," Sara Netzley, associate director of the school's Department of Communication, was quoted as saying. "It would take someone who's pretty naive, pretty new to the Internet and social media to walk away thinking, 'Yep, that's Mayor Ardis.'"

But city records obtained by the Tribune through a Freedom of Information Act (FOIA) request showed that Ardis and City Manager Patrick Urich went to great lengths to locate and prosecute Daniel, despite initial misgivings by Peoria Police Detective James Feehan, who was asked to investigate the account.

"I looked at the comments and photographs posted by the suspect. Nothing contained within amounts to criminal violations," Feehan said in an email to Chief Steve Settingsgaard. "However, there are tweets posted by the individual which amount to defamation. Without a subpoena issued to Twitter to obtain the IP address of the account creator, there is not much else we can do. I did send Twitter the report of the impersonating account and requested it be removed asap."

But Ardis continued to press Urich and Feehan for "a sense [of] urgency" on the case. Feehan later discovered a state misdemeanor statute barring invididuals from falsely identifying themselves as public officials. Local police subsequently subpoenaed both Twitter and Comcast to find out where Daniel lived.

Ardis defended his actions in a brief statement on Thursday.

"There's no way for someone to know that what was being said under my name, my picture, and my contact information was not coming from me as the mayor," Ardis said. "My identity as mayor was stolen. Anyone reading the content would assume they were reading my comments as the mayor."

However, the Tribune reported, the raid turned into another source of criticism against Ardis, with residents and city council members heckling him for not simply ignoring the account.

Freelance journalist Justin Glawe, a Peoria native and former Journal-Star reporter, reported in Vice magazine that Settingsgaard was forced to resign over the criticism of the raid on Daniel's home. Glawe also said that, according to a source, Ardis' administration also believed he was the one posting as @PeoriaMayor, thinking he still worked at the newspaper.

"If the source in City Hall is correct, Ardis was convinced that reporter was me, and likely thought that by exposing me as the foul-mouthed fiend behind @peoriamayor he’d ruin my reputation as a journalist and that of the Journal Star in the process," Glawe wrote. "Instead, Ardis found his own reputation amplified and destroyed, to the extent that 'Twitter Incident' is now a prominent section on his Wikipedia page."

Watch WGN's report, as aired on Friday, below.