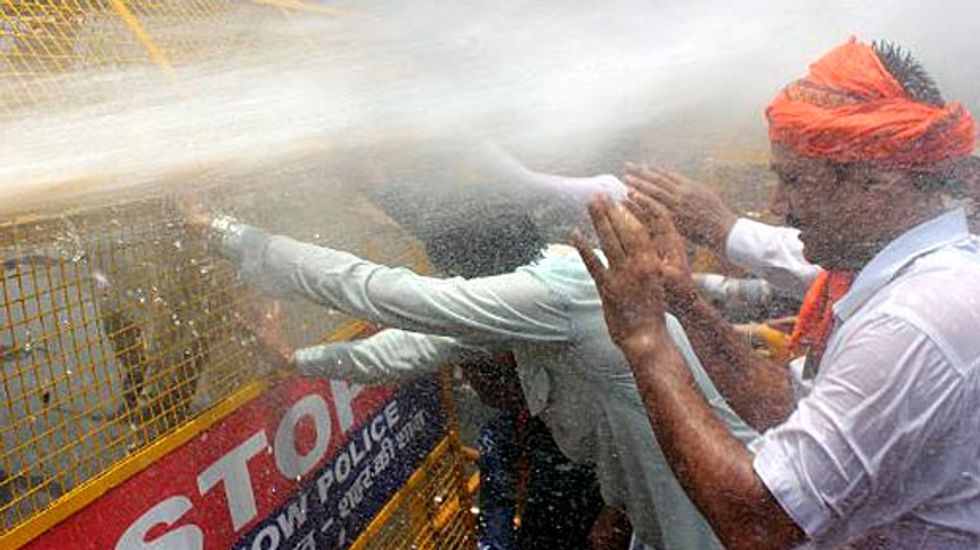 Indian police fired water cannon on Monday at a group of mainly women protesting against the gang-rape and lynching of two girls in the country's largest state.

Several hundred protesters were demanding an end to violence against women outside the office of the chief minister of the state of Uttar Pradesh, when riot police tried to disperse the crowd by blasting them with water, footage broadcast on Indian television showed.

The protests came amid a growing uproar over last week's killings in Uttar Pradesh, with the United Nations saying violence against women should be regarded as a matter of basic human rights.

"There should be justice for the families of the two teenaged girls and for all the women and girls from lower caste communities who are targeted and raped in rural India," said Lise Grande, the UN's resident coordinator for India.

"Violence against women is not a women's issue, it's a human rights issue," Grande added in a statement.

India brought in tougher rape laws last year after the fatal gang-rape of a student on a bus in New Delhi but they have failed to stem the tide of sex attacks across the country.

There was widespread outrage when the initial protests over the Delhi gang-rape were broken up with the use of water cannon, but police resorted to similar methods on Monday in Uttar Pradesh's state capital Lucknow.

"We're not going to sleep, we'll be here, they have to stop this (violence against women)," one protester told the NDTV network during the demonstration in the city before the crowd was drenched by police.

The father of one of the girls who was gang-raped and then hanged in rural Uttar Pradesh last week has accused local police of initially refusing to help find those responsible because they belonged to a low caste.

The two cousins, aged 14 and 12, had apparently gone into fields on Tuesday night to relieve themselves because their home, like most in the state's Badaun district, did not have toilets.

Villagers refused to allow the bodies of the girls to be cut down from a mango tree for hours after they were discovered on Wednesday morning in protest against police inaction.

Police have arrested five people, most of them from higher castes, in connection with the attacks on the girls and a federal police investigation has been ordered.

But rights activists and politicians have said the latest case showed authorities in Uttar Pradesh, which is run by the socialist Samajwadi Party, were "not serious" about tackling sexual crimes.

Asked at a press conference last week about the incidence of rapes in the state, Uttar Pradesh Chief Minister Akhilesh Yadav told a female reporter: "You haven't been harmed, have you? No, right? Great. Thank you."

The head of Uttar Pradesh's ruling party, Mulayam Singh Yadav, who is the chief minister's father, sparked uproar during the recent election campaign when he said rapists should not receive the death penalty because "boys will be boys".

The two Yadavs have been widely criticised for failing so far to visit the village of Katra Shahadatganj where the attacks took place.

"I do think that police has a very high responsiblity, a big role to play in cases of crimes against women," she told reporters.

Gandhi also pledged to make the building of more toilets a policy goal of the Modi government, although she did not make any announcement about how such a programme would be funded.

"We will coordinate with the health ministry to ensure that building of toilets is a top priority across the country," she said.

The father of one of the girls, who cannot be named for legal reasons, told AFP on Sunday that he wanted his daughter's killers to be hanged from a tree.

Four adults convicted of the Delhi gang-rape in 2012 were last year sentenced to hang but lawyers for two of them lodged an appeal on Monday in the Supreme Court against their death sentences.