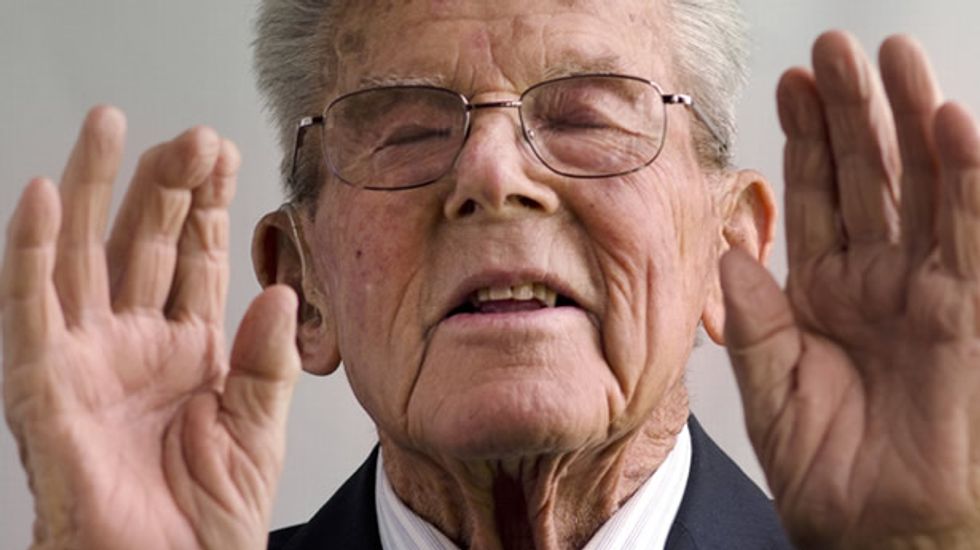 "Stock Photo: Portrait Of Happy Old Man In His 90'S Pray To God." on Shutterstock: http://tinyurl.com/kzyxolg

A high school German teacher in Middlebury, Indiana claims he was fired for complaining about the religious environment at the charter school where he taught, The Goshen News reported Sunday.

According to the complaint Kevin Pack filed with the Equal Employment Opportunity Commission (EEOC) against Northridge High School Principal Gerald Rasler, his contract was terminated after he complained about the evangelical culture. "I was retaliated against and dismissed for filing the religious harassment complaint against Principal Gerald Rasler and for being an atheist," he told The Goshen News.

"I refused to pray, be a Christian or go along with any of [Rasler’s] evangelizing in the school, and they dismissed me over it."

The school disputed that claim in a press release in which it said that poor performance was the reason his contract was terminated. "Middlebury Community Schools expects its teachers to place it students’ educational growth and needs as a first priority," the release stated. "Unfortunately, some teachers do not meet those expectations; Mr. Pack was one of those teachers."

But Pack contended that it was the harassment complaint he filed against Rasler that prompted his firing. He said that he was concerned about Rasler's evangelical agenda after the principal asked him about his religious and political views during his initial interview for the position, but set his qualms aside because the questions were merely inappropriate.

However, shortly after the school term began, he noticed that the questions were not an inappropriate aberration. Rasler sent him an email on August 6, 2013 in which he wrote "May God Grant you save [sic] travel." On December 11, 2013, Rasler sent an email on the faculty listserv in which he implored people to "get on your knees and pray for four good weather days during finals."

Pack replied to that second email, writing that since "I’m an atheist and a mystical sky daddy has nothing to do with weather, I won’t be kneeling."

According to the religious harassment complaint, when Pack later encountered Rasler, he "acted aggressively and hostile," speaking to Pack "with malice" and chastising him "for sending the response email out. I responded to him, as I had in the e-mail, that I was an atheist."

Rasler admitted that he then threatened to fire Pack, but it was not until February 24, 2014 -- the same day that his original claim of religious harassment was deemed unsubstantiated by school investigators -- that he could follow through on that promise.

On April 2, the school board voted 4-0 to void Pack's teaching contract.

The board claimed that it fired him for, among other things, screening R-rated films during class. Pack said that the film in question, Run Lola Run, is commonly used in German courses.

"They were so bent out of shape when I filed that [religious harassment] complaint they wanted to get back at me and that’s what they did," Pack said. "I spoke up, I challenged [Rasler] and he got his revenge. He got his revenge against me."

The EEOC does not comment on ongoing investigations, and declined to provide Pack a timetable for when his case would be adjudicated.