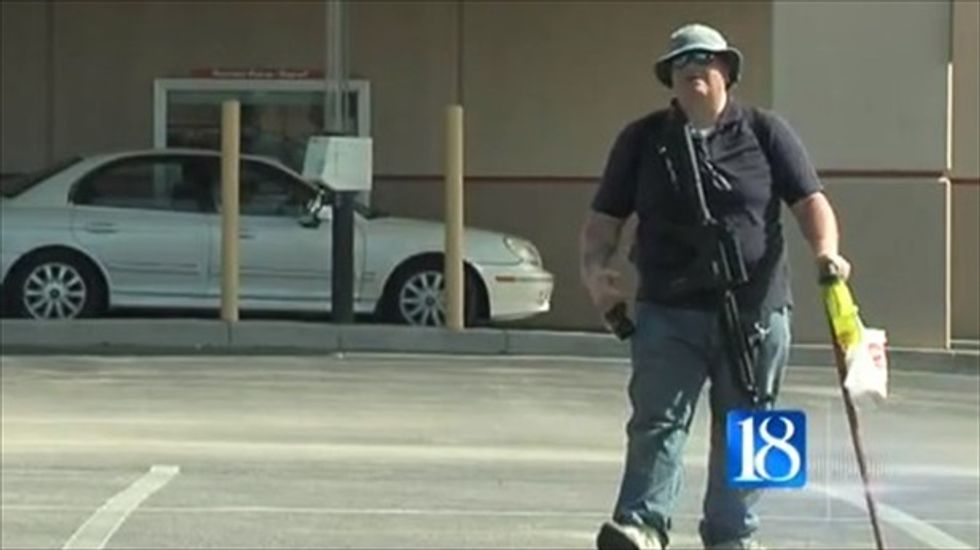 A 45-year-old Indiana man has attracted attention to himself after protesting the suspension of his driver's license by carrying an assault rifle around on foot, WLFI-TV reported.

"I'm not willing to pay for something I didn't do anymore," Mulberry resident Jim Sanders was quoted as saying. "I've put out enough, given them enough. I'm not going to do it anymore."

Sanders' license was suspended after accumulating more than $900 in fines for various traffic violations, including possession of multiple licenses and failure to signal. After refusing to pay the fines, Sanders began taking the rifle with him while he walked. Police said state law allows him to do so, as long as he does not use it to threaten anyone.

However, Sanders told WLFI he only follows "lawful laws," meaning he abides by the federal Constitution, but not local statutes or laws. He denied being part of the "sovereign citizen" movement, but identified himself as a "sovereign man."

Sanders, who walks with the help of a cane, said he is carrying the rifle to protect himself and his valuables, including copies of the Constitution and the Bible he keeps in a backpack.

The Lafayette Journal & Courier reported that Sanders also told police that a truck swerved at him while walking to Lafayette, about 12 miles away from Mulberry, hitting him with its rearview mirror. At the time, he was headed toward his doctor's office to pick up pain relief medication.

Sanders said he would continue to carry the rifle on foot until Judge Michael Morrissey agreed to dismiss the fines against him.

"I'm doing this as a protest to draw attention to the unjustice that's happening," he told the Journal & Courier.