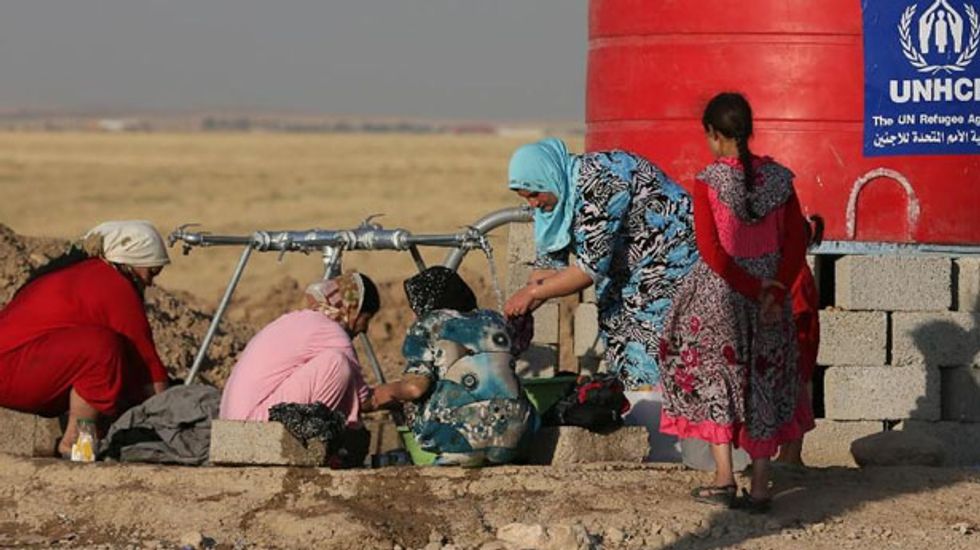 Amsha's family decided to leave the northern Iraqi city of Tal Afar after shelling one night killed their neighbour as he used his outdoor toilet.

The 24-year-old now lives in a tent with the other eight members of her family at the Germawa camp in the Kurdish province of Dohuk.

She describes nights of terror as Sunni militants traded fire with Iraqi troops desperate to hold onto the town.

She curses her country's politicians, both Shiites like Prime Minister Nuri al-Maliki and Sunnis like herself, for courting her support ahead of April 30 elections, only to abandon the city.

"We walked for four hours to leave Tal Afar. We're now living nine to a tent, trying to breathe in this heat," she says.

"Where are the politicians from Tal Afar? The ones who came to ask for our vote during the elections?

"They are in Arbil," she says, referring to the capital of Iraq's autonomous Kurdish region.

It has been insulated from the insurgent offensive, led by jihadists from the Islamic State of Iraq and the Levant, that has overrun parts of five provinces north and west of Baghdad.

They are "safe with their families, or even in the (United Arab) Emirates."

Amsha, who declines to give her last name, has spent eight days in the camp, after fleeing with her family late one night.

"We were going mad with the shelling. The government planes were overhead and we didn't know when they would fire or where," she says.

"Our neighbour was killed in shelling one evening as he went to the toilet, and none of us could sleep because we didn't know if we'd wake up."

She said the army announced, as the battle for the town stepped up, that civilians who wanted to leave should do so.

"The Iraqi army started to fire in the air as we left, and some of us threw ourselves to the ground, thinking they were shooting at us."

She and her family say they walked for hours before they were able to find someone with a car willing to pick them up.

They eventually arrived at Germawa, just as the camp was being set up.

A Kurdish official overseeing the camp says nearly 700 people are sheltering there -- displaced from Tal Afar and nearby Mosul, a city of some two million that was the first to fall in the militant offensive.

Amsha, like many at the camp, says her family fled for fear of the government response to the militant assault as much as to escape the fighters.

"We are caught in the middle. We didn't see the militants, only the army's shelling and air strikes," she says.

"We just want to be able to sleep and know we will wake up in the morning," she adds, tears running through the makeup lining her eyes.

She dabs her face with the ends of the brown scarf loosely tied around her hair and regains her composure, and a measure of anger.

"We are trapped. We have no say in our future, everything is decided by those who are in power," she says.

She makes no secret of her contempt for the Iraqi army, but also expresses no love for the Sunni militants.

"I don't care who is in charge, Arab, Kurdish, Turkmen, Sunni, Shiite. We just want a future.

"I am a student at university. My brother and sister both have exams they still need to take; we don't know what will happen to them."

And she talks shyly about the indignities of life at the camp, especially for its women, including her and her three sisters.

"All we want is a life, and a chance to decide what to do with it."