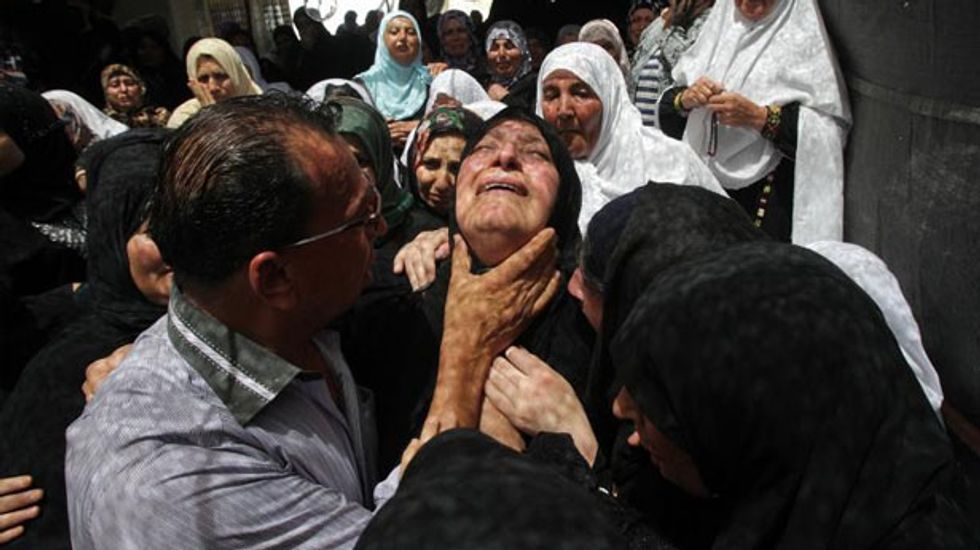 Israeli soldiers killed a Palestinian 14-year-old in the occupied West Bank Friday as they pressed a crackdown on the Islamist Hamas movement in their search for three missing teenagers.

Troops also wounded two Palestinians in a refugee camp just outside Jerusalem as clashes flared in the face of the massive military operation in which they have detained 330 Palestinians over the past week, medical sources said.

Israel accuses Hamas of last week's abduction of the two 16-year-olds and a 19-year-old from a hitch-hiking stop in the West Bank, an allegation the Islamist group has dismissed as "stupid".

But Israel has seized on the opportunity to drive a wedge between Hamas and the Palestinian leadership, who formed a merged administration for the West Bank and Gaza Strip just this month for the first time in seven years.

Palestinian security and medical sources said 14-year-old Mohammed Dudin was shot in the chest in a clash that erupted after Israeli soldiers arrived to conduct arrests in the village of Dura, south of the West Bank city of Hebron.

Dudin was taken to the Alia hospital in Hebron, where his death was pronounced.

The Israeli army said villagers had thrown stones and Molotov cocktails at troops on an arrest mission in Dura, who had responded with live fire.

A spokeswoman told AFP the army was examining the reports of Dudin's death.

Mustafa Aslan, 20, was in critical condition at the Hadassah hospital in Jerusalem.

Mohammed Shehada, 21, was being treated in the West Bank city of Ramallah.

Palestinian prime minister Rami Hamdallah -- the head of the new unity government formed earlier this month -- was to attend the main weekly Muslim prayers in Hebron later Friday, which were to coincide with Dudin's burial in Dura.

Hamas has lashed out at the Palestinian leadership for its decision to maintain security coordination with Israel despite the massive wave of searches and arrests.

Men under 50, and residents from elsewhere in the West Bank, were being kept away, police spokesman Micky Rosenfeld told AFP.

Rosenfeld said police had received "indications of the possibility of disturbances in and around the Old City" of Jerusalem after the prayers.

On Thursday, police announced they had shut down two Hamas institutions in east Jerusalem, one a social centre operating from a mosque in Beit Safafa village, the other a charity office in the Sur Baher district.

Israeli troops also carried out search and arrest operations overnight in the Dheisheh refugee camp, near Bethlehem, and in Arura, north of Ramallah, "detaining ​some 25 suspects and searching approximately 200 locations," the army said.

Troops were faced with "sporadic confrontations" in the form of "rocks, explosives and flammable devices" and responded to "the life-endangering threat with live fire," it added.

Since the start of the operation last week, troops have "scanned about 1150 locations in search for the abducted boys and for terror elements."

"Approximately 330 suspects were detained, out of which 240 terrorists associated with Hamas," the army said.

Overnight, the Israeli military also carried out a series of air strikes in the Gaza Strip in retaliation for rocket fire against southern Israel late Thursday.

The Israeli army said it targeted "three concealed rocket launchers in the northern Gaza Strip, a terror site in the central Gaza strip and a weapon storage facility in the southern Gaza Strip."

Six people were wounded, four of them children.

The missing teenagers are Gilad Shaer, 16, from Talmon settlement near Ramallah, Naftali Frenkel, 16, from Nof Ayalon, and Eyal Ifrach, 19, from Elad, both in central Israel.