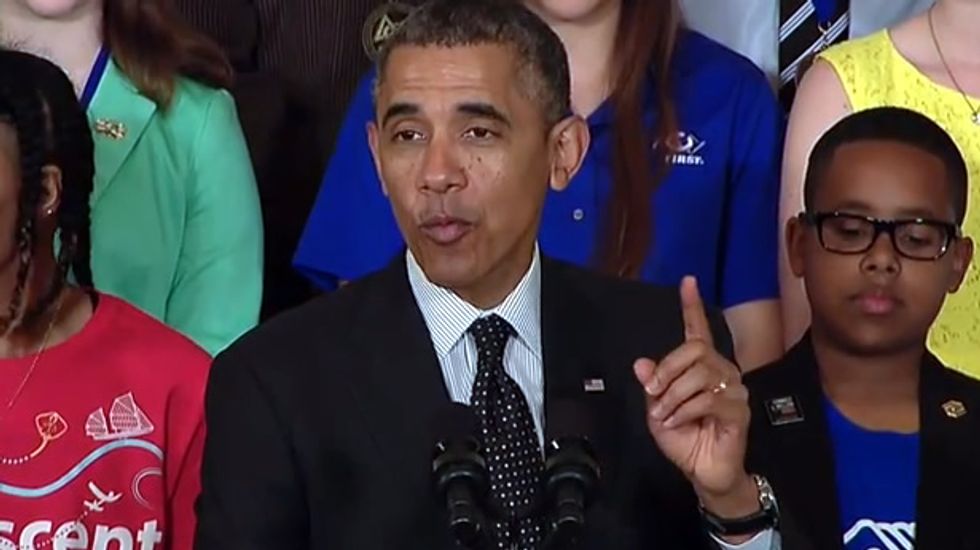 Answers in Genesis founder Ken Ham claimed that the work presented at the White House Science Fair proves that even President Barack Obama believes the creationist won his debate with Bill Nye in February.

Ham acknowledged that Bill Nye received a thunderous applause when President Obama mentioned his name, but then quickly pivoted, writing that Nye claimed that "if students were not taught evolution in school, it would undermine technology."

He then asked, "tell me what the role of a belief in evolution played in any of these experiments and innovative ideas?"

"The answer is none!" he wrote. "Evolution is not mentioned. The students could all be biblical creationists and that wouldn’t change even one aspect of their experiments and ideas."

The link he included to the projects presented at the White House Science Fair, however, lists two studies of the behavior of cancer cells, both of which depend on theories of cellular development that are themselves predicated on evolutionary theory.

But the real target of Ham's broadside was Nye, who he repeatedly claims to have bested in their February debate.

"Isn’t it ironic," he asked, "that Bill Nye, who has stated over and over again that students will not be innovative if they believe in creation, was present for these innovative students to be honored—and evolution had zero to do with their accomplishments!"

Ham further claimed that the lack of any projects that studied "molecules-to-man evolution" proves that the White House -- and by extension, President Obama -- implicitly endorsed Ham's position.

On the question of whether evolutionary theory is a prerequisite for technological innovation, Ham wrote, "the White House in a sense has answered it for [Nye]. It’s no! This fair had some of the brightest students in the nation who were honored by the president for their extraordinary experiments and ability to innovative. Wouldn’t you think if evolution was so critical to seeing more innovation in technology, that it would be so obvious there?"