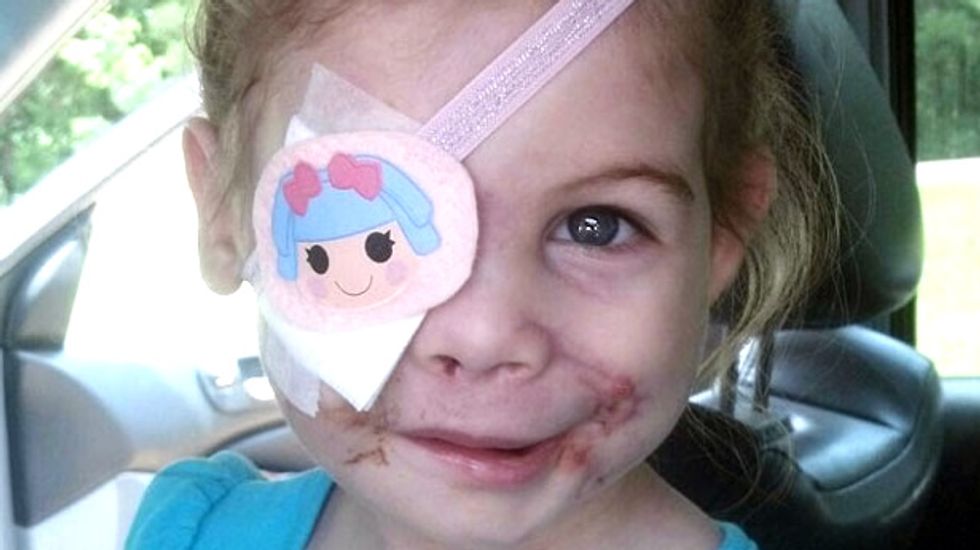 A 3-year-old girl in Jackson, Mississippi who was disfigured in an April pit bull attack was asked to leave a Kentucky Fried Chicken because employees said her scars were disturbing paying customers.

Kelly Mullins said she had taken her granddaughter, Victoria Wilcher, to the doctor's office and stopped at a Kentucky Fried Chicken on the way home.

"I ordered a large sweet tea and her some mashed potatoes and gravy because she was hungry. She was on a feeding tube at the time, but I figured she could just swallow the potatoes," Mullins told WAPT.

She said that after she and her granddaughter sat down, an employee approached them and said, "We have to ask you to leave because her face is disrupting our customers."

The right side of Victoria's face was paralyzed in the attack, which occurred at her grandfather's house.

According to the Facebook page tracking her recovery -- Victoria's Victories -- in addition to the paralysis, her upper and lower jaw, cheek bones, nose, and right eye socket were broken during the attack. She lost her right eye, and her jaw cannot be fully reconstructed until she grows more bone, as the pieces remaining were too small to fuse together.

Her grandmother said that "she's got a lot of surgeries to go through and she won't even look in the mirror anymore. When we go to a store, she doesn't even want to get out of the car. She's 3 years old and she's embarrassed about what she looks like. She's embarrassed and I hate it because she shouldn't be -- it ain't her fault."

Because of this embarrassment, Mullins said, she "understood exactly" why the Kentucky Fried Chicken employee was asking her to leave.

On Friday, Kentucky Fried Chicken sent an email to WAPT, saying that it "launched an investigation as soon as we were made aware of this report. We take this very seriously, as we have zero tolerance for any kind of hurtful or disrespectful actions toward our guests. Our investigation is ongoing, but we have been in touch with the family and are committed to doing something appropriate for this beautiful little girl and her family. We will also work with the franchisee to take appropriate action at the restaurant once the specifics of the incident are determined."

Her grandmother said that "if KFC makes this right, no hard feelings will be harbored."

Watch video via WAPT below.