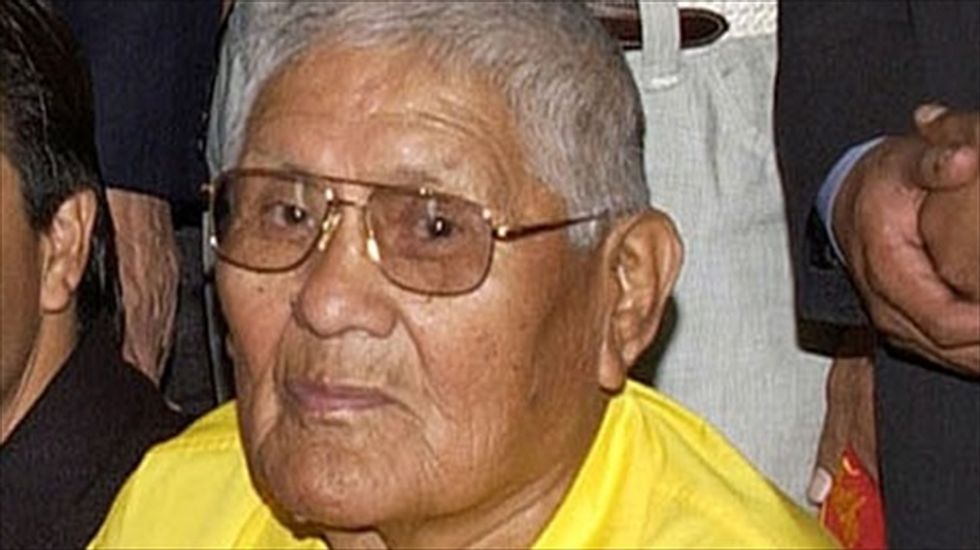 ALBUQUERQUE N.M. (Reuters) - The last of 29 Navajo Americans who developed an unbreakable code that helped Allied forces win the second World War died in New Mexico on Wednesday of kidney failure at the age of 93.

Chester Nez was the last remaining survivor of an original group of 29 Navajos recruited by the U.S. Marine Corps to create a code based on their language that the Japanese could not crack.

The president of the Navajo Nation, Ben Shelly, said his office had been in touch with the family, and that Nez had died peacefully in his sleep.

"It saddens me to hear the last of the original code talkers has died," Shelly told Reuters. "I am ordering flags to be flown at half mast beginning tomorrow ... We are proud of these young men in defending the country they loved using their Navajo language."

About 400 code talkers would go on to use their unique battlefield cipher to encrypt messages sent from field telephones and radios throughout the Pacific theater during the war.

It was regarded as secure from Japanese military code breakers because the language was spoken only in the U.S. Southwest, was known by fewer than 30 non-Navajo people, and had no written form.

The Navajos' skill, speed and accuracy under fire in ferocious battles from the Marshall Islands to Iwo Jima is credited with saving thousands of U.S. servicemen's lives and helping shorten the war. Their work was celebrated in the 2002 movie "Windtalkers."

Last November, the American Veterans Center honored Nez for bravery and valor above and beyond the call of duty, awarding him the Audie Murphy Award for distinguished service.

"I was very proud to say that the Japanese did everything in their power to break that code but they never did," Nez said in an interview with the Stars and Stripes newspaper the day before receiving the award.

Nez and his young fellow recruits were called communications specialists by the Marines and were taught Morse code, semaphore and "blinker," a system using lights to send messages between ships.

The code they developed substituted Navajo words for military terms. CHAY-DA-GAHI, which translates to "turtle," came to mean a tank while a GINI, "chicken hawk" in English, became a dive bomber. America was NE-HE-MAH, "our mother."

The code talkers served in all six Marine divisions and 13 were killed in World War Two.

Nez also volunteered to serve two more years during the Korean War. He retired in 1974 after a 25-year career as a painter at the Veterans Administration hospital in Albuquerque.

(Additional reporting and writing by Daniel Wallis in Denver; Editing by Cynthia Johnston and Bill Trott)

[Image: Navajo Code Talker Chester Nez is seen at the State Department in Washington, D.C. on June 5, 2002. By Jeff Snyder for Reuters]