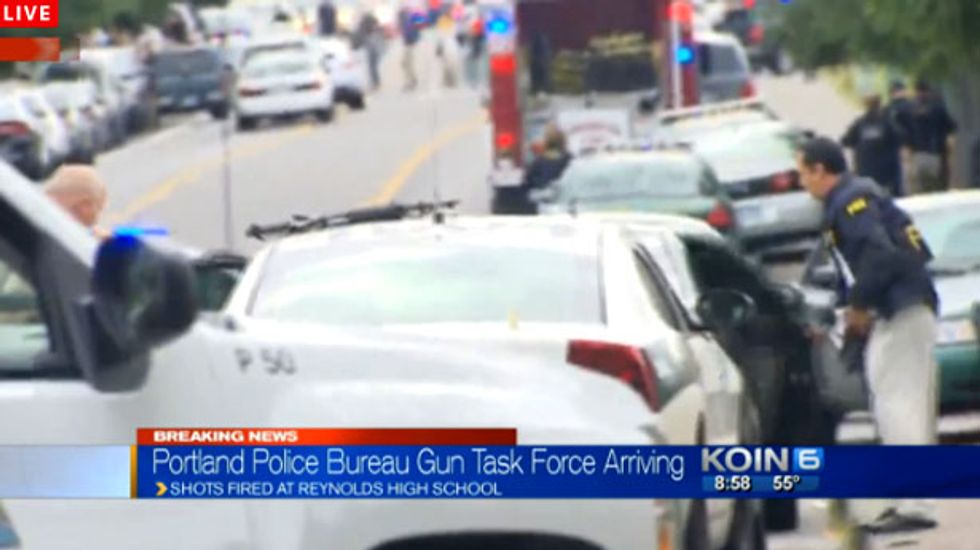 TROUTDALE Ore. (Reuters) - A gunman walked into an Oregon high school and fatally shot a student on Tuesday before authorities found him dead a short time later, a day before students were due to finish classes and break for summer vacation.

[Editor's Note: This story has been updated. See below.]

There was no immediate word of any other serious injuries in the shooting at Reynolds High School in the northern Oregon city of Troutdale, which was on lockdown as students were evacuated from the school room by room, police said.

"A gunman entered the high school this morning, shot one student. Unfortunately, that student has died," Troutdale Police Chief Scott Anderson said at a news conference. "The gunman was located and the gunman is also deceased."

Anderson did not identify the gunman nor say if he was a student. He also did not say how the gunman died.

Multnomah County Sheriff’s Lieutenant Steve Alexander said the situation was under control and the school was working on reuniting students with their parents. He said there was no immediate indication that anyone else had been seriously hurt.

“My understanding, we’re still investigating, they’re still going through the school. The initial indications are that is it,” he said. The violence in Oregon was the latest in a string of U.S. shootings in recent weeks, including one at a Christian college in neighboring Washington state last week, that have renewed a protracted debate over gun regulations. Television footage at the Oregon school showed police officers in helmets and tactical gear, leaving armored vehicles and running near the school’s perimeter with rifles. Students were seen streaming out of the school with their hands raised.

"I do know that the students are being evacuated room by room by the police. The shooter is confirmed dead. They're evacuating students that were on lockdown one room at a time," Troutdale Mayor Doug Daoust told CNN. "We do have a huge police presence in front of the school."

Update, 5:07 p.m. EST: CNN reported that police did confirm that the shooter was a student at the school.