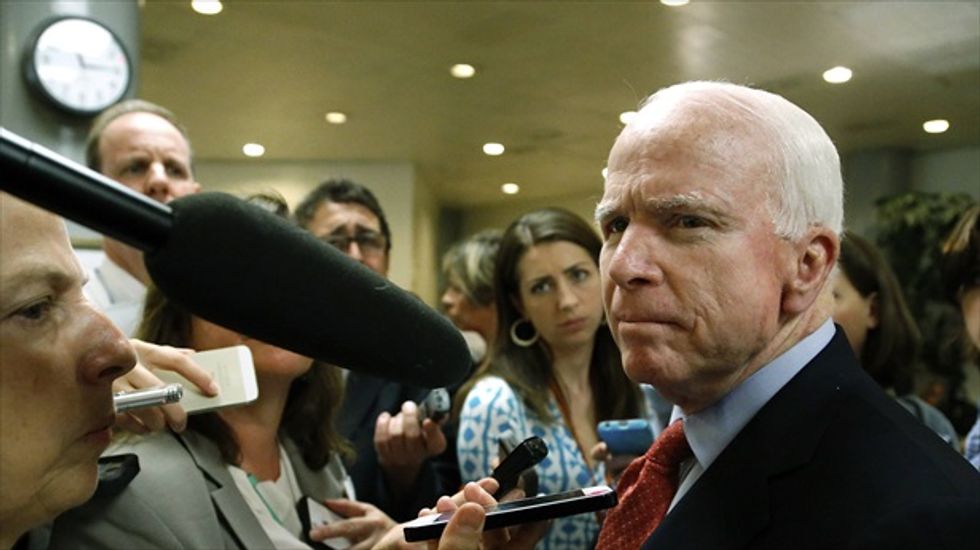 McCain, a key member of the Senate Armed Services Committee, said he had long been troubled by the Pentagon's payment of 85-percent or higher award fees to Lockheed on the F-35 program despite cost increases and schedule delays, adding the background to those decisions was "disturbing."

Former Deputy Defense Secretary Ashton Carter last month said the Pentagon's F-35 program manager told him he had kept the fees high because he liked the Lockheed executive in charge, and the company official had said he would be fired if the fees fell below 85 percent.

Carter, who was the Pentagon's chief weapons buyer at the time, made the remarks at a university event on May 16 and they were reported by InsideDefense.com on May 30.

“This is, of course, totally unacceptable. It is the kind of cronyism that should make us all vigilant against, as President Eisenhower warned us over 50 years ago, the military-industrial complex," McCain said in a speech on the Senate floor on Monday.

Carter did not name the people involved but said the F-35 program manager was fired. Then-Defense Secretary Robert Gates fired Brigadier General David Heinz, the two-star Marine Corps general who was running the F-35 program at the time, in February 2010 and elevated the job to the three-star level.

Lockheed later announced the departure of Dan Crowley, who was the company's F-35 program manager at the time. Lockheed declined comment on Monday.

McCain said the incident raised questions about why award fees were included in the initial F-35 contract in 2001, and why senior officials overseeing the program had not questioned the level of the fees given cost and schedule problems.

He said it also highlighted the importance of giving federal acquisition officials the tools they needed to avert the "unwarranted influence" of contractors on government programs.

McCain said the F-35, the Pentagon's largest weapons program, continued to face major challenges despite a recent report from the Government Accountability Office, which said it was "moving in the right direction."

"This is clearly a program that has had and continues to have major problems," McCain said, citing mandatory inspections ordered last week of all F-35 jets after an oil leak caused an in-flight emergency at a Marine Corps based in Arizona.

Frank Kendall, the Pentagon's current acquisition chief, last week highlighted the importance of incentive fees in structuring contracts, but rejected the use of "one size fits all" policies on contracts since each deal was unique. He said training acquisition workers was critical.

McCain also said was skeptical about letting acquisition officials decide which contract structure was "appropriate" in the absence of effective guidance and training.