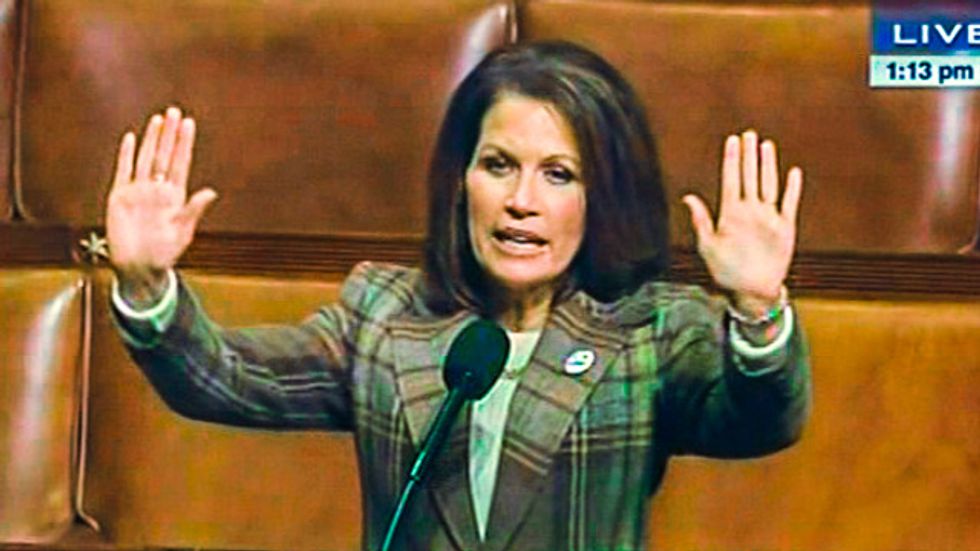 Retiring House Republican Rep. Michele Bachmann said in an interview Friday with Huffington Post's Ryan Grim that Republicans have nothing to fear from the rise of Massachusetts Sen. Elizabeth Warren (D-MA) and her views on economic inequality.

The New Yorker magazine this week called Republican upstart David Brat "the Elizabeth Warren of the right" after his surprising defeat of House Majority Leader Eric Cantor (R-VA) in the Virginia Republican primary.

Bachmann scoffed at the comparison. Brat, she said, is much better than that.

"I don't see Elizabeth Warren as someone Republicans have to worry about, not at all," Bachmann told Huffington Post. "Elizabeth Warren, after all, was a major advocate of Dodd-Frank."

The 2010 Dodd–Frank Wall Street Reform and Consumer Protection Act established the Consumer Financial Protection Bureau (CFPB) and sought to put in place market protections to prevent another financial crash like 2008.

Bachmann described it differently, saying, "Dodd-Frank is the biggest insider legislation giveaway that there's ever been. If any one is aligned with elites, it's Elizabeth Warren. She is in no way reflective of where the average American is, because what she did through Dodd-Frank was institutionalize bailouts for the major investment banks forever. That's what she did. So now the taxpayers are on the hook for who? The Goldman Sachs of the world? I mean, really? So that's what she's behind, so she is in no way a populist. Her views are among what the American people are rejecting."

Huffington Post's Grim noted that Wall Street in no way saw Dodd-Frank as a bailout, and fought tooth-and-nail against its passage for months. Republicans and bank-friendly officials were able to block Warren's appointment to head the bureau she created, but they were unable to stop her from becoming a senator.

Warren was not a senator, however, in 2010 when the law was passed. Also, the Harvard economics professor was more focused on the CFPB portion of the bill, which, as Talking Points Memo noted, was an idea that Warren proposed in an article for the periodical Democracy: A Journal of Ideas.