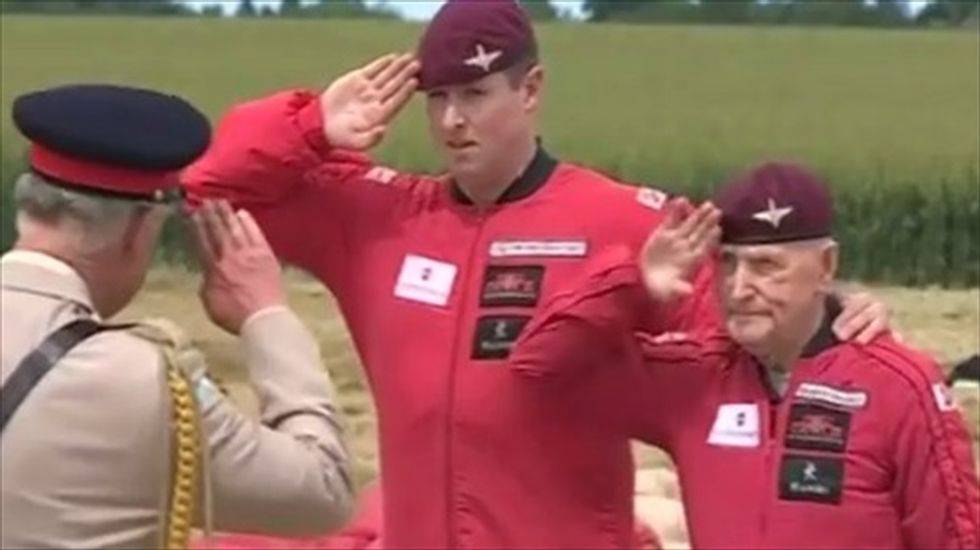 At least two 89-year-old veterans went to great lengths to attend the events honoring the 70th anniversary of the Allied Forces' invasion of Normandy, commonly known as "D-Day," The Guardian reported.

Jock Hutton (pictured above) arrived at the proceedings on Thursday via parachute, in a re-enactment of his service with the 13th Battalion of Britain's Parachute Regiment during the June 6, 1944 attack. Hutton made the jump with a member of the British Army's current Parachute Regiment display team, the Red Devils, landing about 30 yards from Prince Charles, who greeted him with a salute.

"At my age life tends to get a wee bit boring," Hutton, a native of Scotland, told the Telegraph. "So you've got to grab at any chance at excitement."

According to the Guardian, one of Hutton's contemporaries, identified as former Royal Navy Officer Bernard Jordan, sneaked out of his nursing home in the town of Hove wearing a jacket with his service medals on under his raincoat, and took a ferry to join his fellow veterans. Jordan was briefly reported as missing before a younger veteran attending the event confirmed his whereabouts to authorities.

The BBC reported that Jordan, who was the town's mayor for a year, undertook his solo mission after failing to get an official credential allowing him to take part in Friday's ceremony.

"I'm not surprised to hear he's gone missing," Jordan's predecessor as mayor, Les Hamilton, was quoted as saying. "The memorial services meant a lot to him. He clearly didn't want to miss what might be his last one."

Watch footage of Hutton's latest jump into Normandy, as posted by Britain's Channel 4 News on Thursday, below.