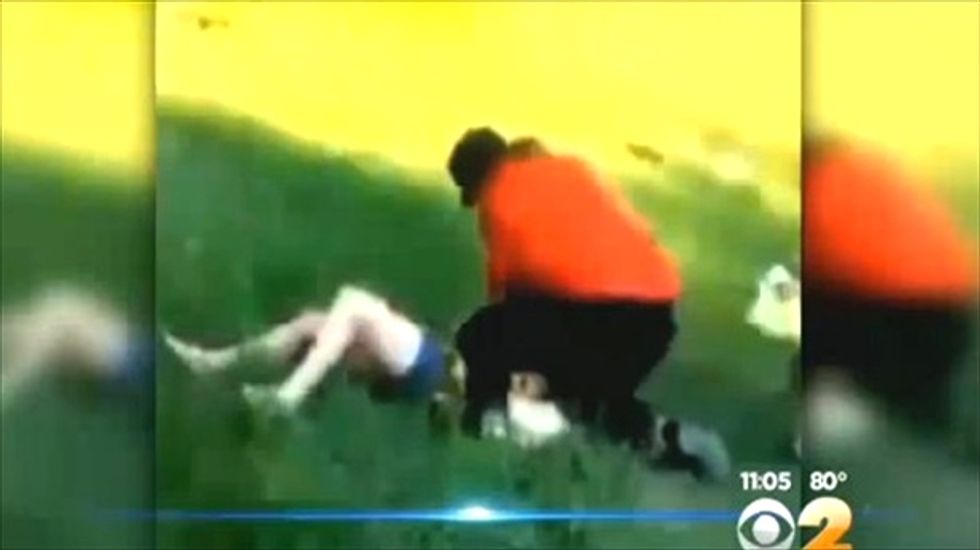 Authorities in Salem, New Jersey are searching for a 25-year-old suspect caught on video beating another woman in front of her 2-year-old son as several observers did nothing about it, the New Jersey Star-Ledger reported.

The footage shows a woman identified as Latia Harris attacking 27-year-old former co-worker Catherine Ferreira on Tuesday on a walking path between the McDonald's restaurant where Harris works and Ferreira's apartment complex. Police said the suspect, wearing a McDonald's uniform in the video, confronted Ferreira for allegedly spreading rumors involving Harris and her manager.

The suspect can then be seen pushing Ferreira to the ground and punching her several times in the head and face at close range as the boy looks on. He then begins kicking the suspect in an attempt to defend his mother. Harris then stands up and tells Ferreira, "You had better get your son before I kick him in his f*cking face, too," before saying the victim "nearly made me lose my job" and hitting her again. At one point, the person filming the attack shows several witnesses to the attack, none of whom attempted to break it up.

Ferreira admitted to WCBS-TV that she had discussed Harris' lovelife with others, but that the attack could have been fatal.

"Had she hit me in the right spot, it would have been over — over nothing," Ferreira was quoted as saying. "McDonald's isn't worth it. A guy isn't worth it."

The attack limited Ferreira's ability to see out of her left eye, and she suffered a broken nose and numerous contusions. Harris is currently being charged with aggravated assault and two counts of making terroristic threats but could face additional charges involving her "extreme indifference to the value of human life."

Police were unable to find Harris at her last known address and she has not been seen at her workplace since the attack.

"I am aware of the incident involving one of my employees earlier this week. I am extremely disturbed by this kind of behavior and it goes against the values and standards that I expect from my employees in my restaurants," the restaurant's owner, Jim Burciaga, said in a statement. "This employee will not be serving customers pending this important police investigation and I'm fully cooperating with the local police in this matter."

Watch WCBS' report on the attack, as aired on Thursday, below.