NRA apology to Open Carry shows that the NRA is a gun marketing group, not a rights lobby 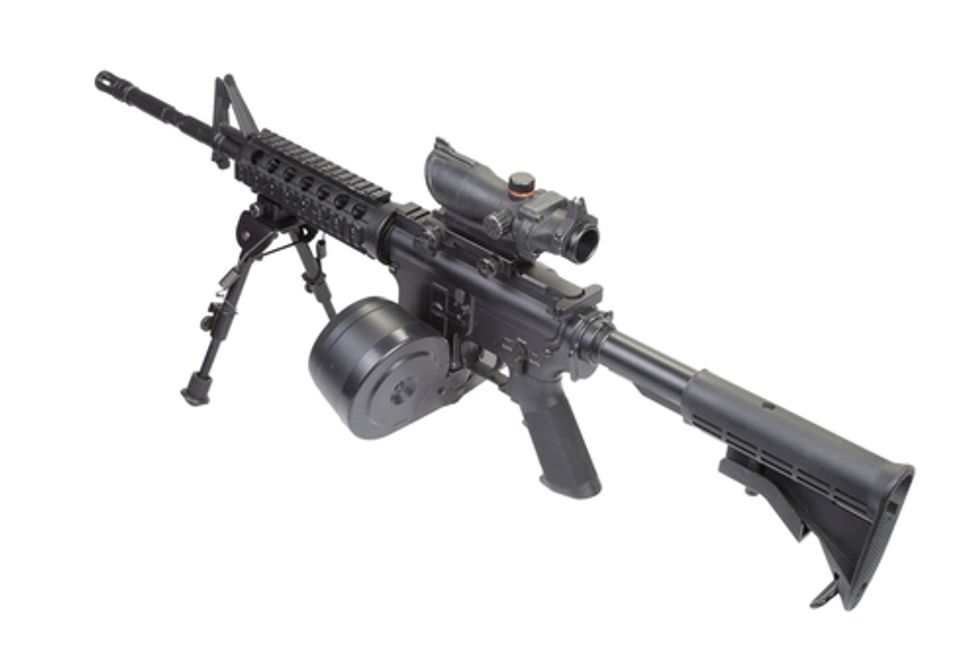 They say, once you own ten of these, your wife starts wearing an apron and your dick grows two inches!

Well, that didn't last long. In a story that spread like wildfire, the NRA seemingly distanced themselves from the Open Carry Texas nuts, the guys whose anxieties about their suburban, air-conditioned lifestyles cause them to try to prove their manliness by carrying big, scary-looking guns around the symbols of placid, very un-Clint-Eastwood-like suburbia, such as Chipotle or Jack-in-the-Box, and getting a rise out of scaring people.* (While, of course, pretending like they're "protecting" them.)  The screaming insecurities that are poorly concealed with the big guns are an embarrassment to gun owners, the NRA seemed to argue in their statement last week:

Let's not mince words, not only is it rare, it's downright weird and certainly not a practical way to go normally about your business while being prepared to defend yourself. To those who are not acquainted with the dubious practice of using public displays of firearms as a means to draw attention to oneself or one's cause, it can be downright scary.  It makes folks who might normally be perfectly open-minded about firearms feel uncomfortable and question the motives of pro-gun advocates.

The blog post went on to argue that these guys are practically begging people to start passing bans on having long guns in public. This is true, and if the NRA really was primarily about protecting guns from as much regulation as possible, then this wouldn't really be a controversial stance at all.

But that's now what the NRA is. The NRA needs to be understood not as a lobby for gun owners, but as a lobby for gun sellers. Their job, above all other things, is to protect the profits of the gun industry. That means that they can't kill the goose that lays the golden eggs, which is pandering to and provoking this highly insecure masculinity that drives gun sales. Unsurprisingly, then, the NRA has apologized for this blog post and has changed position entirely.

“It shouldn’t have happened,” NRA Institute for Legislative Action director Chris Cox said on theCam and Co. radio show. “I’ve had a discussion with the staffer who wrote that piece, and expressed his personal opinion. Our job is not to criticize the lawful behavior of fellow gun owners.”

To understand why they did this, you have to understand the marketing pressures on the gun industry. I wrote a piece about this for Alternet, but to summarize: The normal, responsible gun owner who enjoys sport shooting but keeps their gun locked away responsibly and knows you don't need a mini-arsenal to enjoy guns is a dying breed. However, the development of the paranoid, highly insecure right winger who feels this pressing needs to "prove" the manliness he is secretly worried he doesn't have is? Now that's a gold mine. That guy will buy gun after gun after gun, hoping that if he drowns himself in scary-looking weapons, those secret insecurities will be kept at bay.

If the NRA really was a gun rights lobby whose interest was in protecting responsible gun owners, then the "leave your guns at home, son" stance is the correct one. If they are a gun industry lobby interested in stoking the belief that your can regain your manhood by waving a bunch of AR-15s at suburban moms having lunch with their kids at McDonalds, then kissing the ass of the idiots at Open Carry Texas is the best way to go about it. The NRA isn't interested in promoting the interests of responsible gun owners. They're interested in selling guns. The nuts who wouldn't know responsibility if it bit them on the ass are the people who are buying guns right now. The NRA is like any marketing group: They are interested in provoking insecurity so they can sell you a product that supposedly fixes it. They're no more going to tell gun owners to cut it out with the embarrassing gun displays than Ferrari is going to encourage drivers to obey the speed limit and consider the value of driving a more sensible vehicle like a Volkswagen instead.

*As someone who grew up where it actually does look like the wild West, I have to say that the suburban sprawl all over Texas is, in fact, an abomination, but not because of "manliness", but you know, because the suburban sprawl has none of the character of the cities and none of the beauty of the country (plus you can't walk anywhere).  However, these Open Carry assholes have no one to blame but themselves for the enervating sprawl of strip malls and fast food joints that all look the same. No one is making them flock to suburban neighborhoods, buy SUVs, and scarf down junk food until they start to have erection difficulties. If their environment makes them feel so emasculated they need to wave guns around, then that's a sign that you need to start making some life changes, gentlemen.