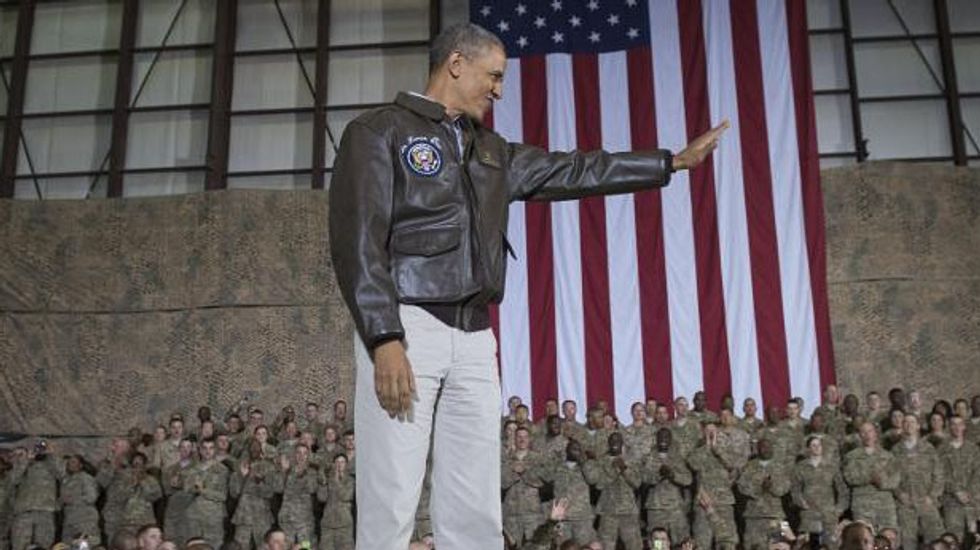 "We will not be sending US troops back into combat in Iraq, but I have asked my national security team to prepare a range of other options that could help support Iraqi security forces," Obama said in Washington.

Shiite Grand Ayatollah Ali al-Sistani urged the people to defend the country against the offensive spearheaded by the jihadist Islamic State of Iraq and the Levant (ISIL).

Prime Minister Nuri al-Maliki, who travelled to the embattled city of Samarra north of Baghdad, said in a statement security forces "began their work to clear all our dear cities from these terrorists".

"The United States will not involve itself in military action in the absence of a political plan by the Iraqis that gives us some assurance that they're prepared to work together," Obama said at the White House.

"We won't allow ourselves to be dragged back into a situation in which while we're there we're keeping a lid on things and, after enormous sacrifices by us, as soon as we're not there, suddenly people end up acting in ways that are not conducive to the long-term stability of the country."

Washington spent billions of dollars training and equipping Iraqi security forces before withdrawing its own troops in 2011.

Around 4,500 American soldiers died between the US-led invasion in 2003 and the US withdrawal.

A representative of Sistani, who is adored by Shiites but rarely appears in public, made the call to arms during the main weekly prayers in the Shiite shrine city of Karbala.

"Citizens who are able to bear arms and fight terrorists, defending their country and their people and their holy places, should volunteer and join the security forces to achieve this holy purpose," his representative announced.

Obama told reporters "any action that we may take to provide assistance to Iraqi security forces has to be joined by a serious and sincere effort by Iraq's leaders to set aside sectarian differences.

"Nobody has an interest in seeing terrorists gain a foothold inside of Iraq and nobody is going to benefit from seeing Iraq descend into chaos."

- US helping with surveillance -

Despite their many differences, Tehran and Washington are united in their determination to prevent Iraq following its western neighbour Syria into civil war.

In an interview Friday, Iraqi Foreign Minister Hoshyar Zebari likened the performance of security forces in the offensive to the collapse of Sunni Arab dictator Saddam Hussein's army in 2003.

However, the interior ministry said it has adopted a new security plan for Baghdad.

Militants and their supporters have been active on sites including Twitter during the offensive.

North of Baghdad, militants were gathering for a new attempt to take Samarra, home to a revered Shiite shrine whose 2006 bombing sparked a deadly sectarian war.

Residents of the city, just 110 kilometres (70 miles) from Baghdad, said gunmen were gathering to its north, east and southeast.

Militants have already mounted two assaults on Samarra, one on Wednesday and one late last week, which were thwarted after heavy fighting.

The militants, who have taken a huge swathe of predominantly Sunni Arab territory in northern and north-central Iraq since launching their offensive in Mosul late Monday, have pressed south into ethnically divided Diyala province.

Forces from the autonomous Kurdish region, meanwhile, took control of territory they have sought to rule for decades against the objections of successive governments in Baghdad.

Diyala's mixed Arab, Kurdish, Sunni and Shiite population has made the province a byword for violence since Saddam's 2003 overthrow.

It has been the fulfilment of a decades-old Kurdish ambition to expand their autonomous region in the north to incorporate historically Kurdish-majority territory across northern and north-central Iraq.

The swift collapse of Baghdad's control comes on top of the loss of Fallujah, west of the capital, earlier this year.

The UN said it had received reports of women committing suicide after being raped or forced to marry ISIL fighters and the summary execution of people believed to have worked for the police.

The International Organisation for Migration estimated Friday that 40,000 people have fled Tikrit and Samarra, adding to half a million people believed to have fled Mosul.