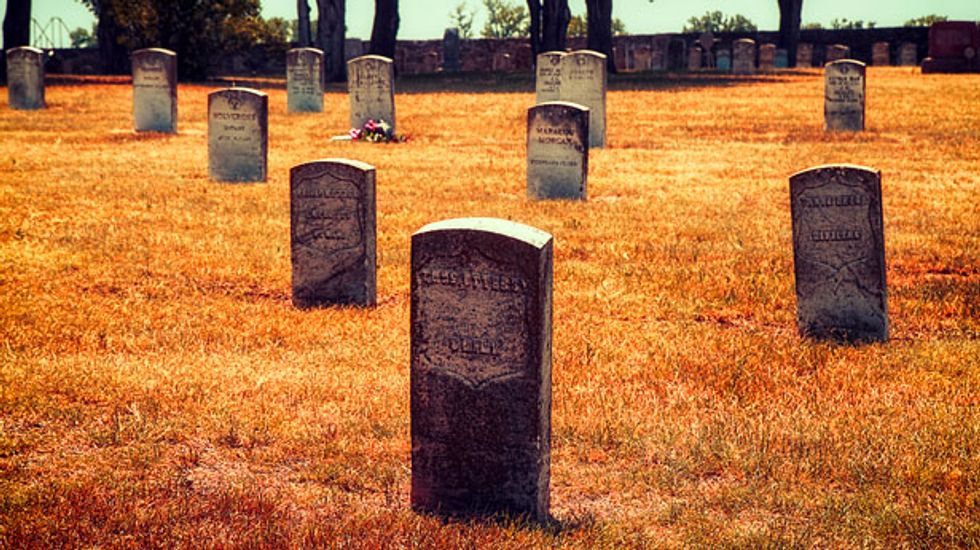 EL RENO Okla. (Reuters) - Along America's most fabled road, Route 66, lie the almost forgotten graves of German and Italian prisoners of war brought to Oklahoma some 70 years ago and who now rest in the red soil of a former Wild West pioneer outpost.

All but ignored by the thousands who travel Route 66 each year on nostalgic tours in search of bygone America, there are few signs and little fanfare surrounding the cemetery housing the remains of 62 German and eight Italian soldiers.

As many as 20,000 German POWs were brought to Oklahoma during World War Two and held at eight main camps and about two dozen branch camps chosen for their remoteness from urban areas for security reasons.

Germans made up the bulk of the POWs, who were put to work at tasks such as picking cotton and clearing fields. Most had been captured in fighting in North Africa but never made it home when the war was over after dying of pneumonia, appendicitis, accidents and, in one case, murder.

In the Fort Reno cemetery, separated by a low wall from the graves of those who died in the Wild West days, lies Hans Siefert, who suffered fatal wounds from a boiler explosion.

The most contentious among the dead is Johannes Kunze, who was murdered by fellow POWs who thought he passed Nazi information to U.S. doctors at a camp in Tonkawa, Oklahoma, said Karen Nix, director of the Fort Reno Visitor Center and Museum, about 40 miles (65 kms) west of Oklahoma City

"The die-hard Nazi prisoners killed him – beat him to death. Those four Nazis were hung, and Kunze was buried here," Nix said.

A few years ago, someone wrote "TRAITOR" on his tombstone in spray paint.

"Someone who knew the story desecrated his grave," said Nix.

A few relatives, however, know of the cemetery and come for annual visits, placing small German or Italian flags or flowers at the burial plots.

"It's a touching thing to see. We have one German fellow in particular who comes every year with his son to see his father," Nix said.

Some locals, like Italian-American Giuseppe Clemente, have a soft spot for the men. Clemente has been working to repatriate the remains of the Italian POWs, many of whose families have forgotten their relatives captured decades ago in Africa and taken to a remote corner of the United States.

One of those was Private Francesco Erriquez, also listed in official records as "Francisco", who was 31 when he was captured by Allied Forces in North Africa, and who died in a farming accident on Jan. 13, 1944, and was buried at Fort Reno.

Erriquez's parents in the southern Italian town of Spinazzola never knew what became of their son, but Clemente traveled to Italy and eventually found his 85-year-old sister Rosa.

"The loneliness is amazing. No one remembers these people," said Clemente.

"We worked for three years with the Italian Consulate to be able to send Erriquez home," Nix said.

"On June 20, 2011, we had a very touching service to disinter him. After 67 years, he was finally able to go home. His remains were taken to Italy, and he’s buried next to his mom and dad."