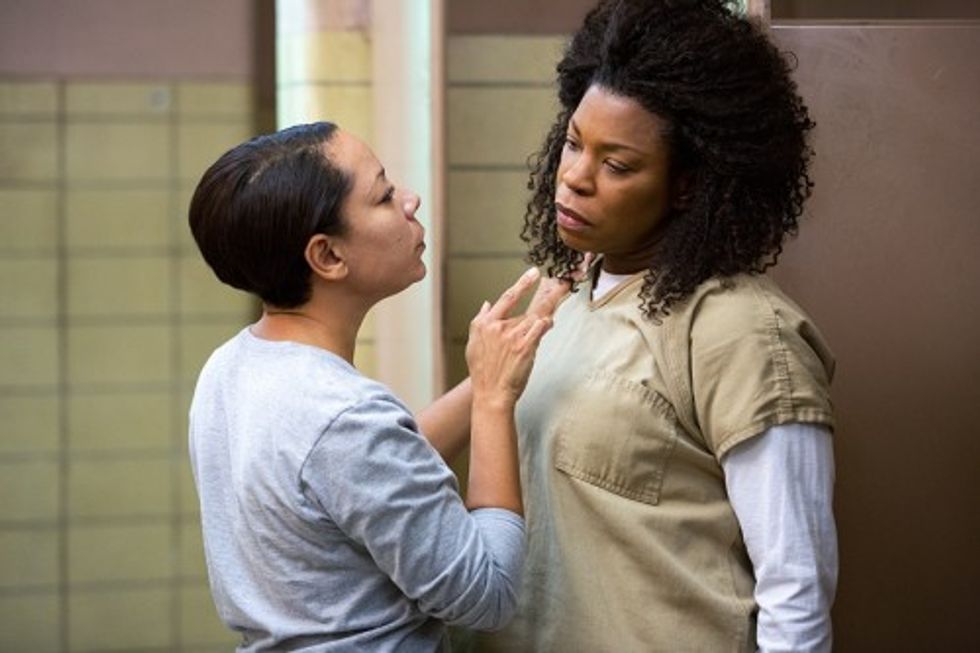 This entire review is spoilers. Just accept it. I don't think I've really written on Orange Is The New Black, due to the glut of think pieces on it last year, but I just finished watching the second season last night and I have some thoughts about it. I particularly loved, this season, how much of the focus shifted to the older women in the prison. There's a lot of discourse about race and class representation on TV, but one thing that tends not to be talked about as much as how post-menopausal women may as well be invisible as far as much of TV is concerned, but on Orange, nearly all the major plot lines had characters who were in their 50s or older who were major players. Even the Golden Girls didn't have as many older female characters interacting with each other in so many interesting ways. Since this show is about a minimum security prison, the older characters also got to be the only ones who were actually kind of scary in some cases, though not all by any stretch.

But I want to talk specifically about the new addition to the cast, a character called simply Vee by the other inmates and played to chilling perfection by Lorraine Toussaint. (If she doesn't get an Emmy, I will throw a fit.) Vee is a two-bit drug kingpin who claims she recruits young people and turns them to drug dealing because she likes money and taking care of people, but who clearly is someone who actually just gets off on feeling powerful. But what struck me as amazing about both the writing and her performance was that it was the best representation I think I've ever seen onscreen of how an abusive personality works. While Vee tries to build "families" out of non-relatives, her strategies and desires are identical to the way that people who abuse their own partners and children work. For anyone who wants to learn more about this issue, I can't recommend it enough. Here are some of the aspects of abuse that the show nailed perfectly.

Abusers mean it. There's a widespread myth out there that abusive, controlling people mean well but just aren't in control of their behavior. But, in reality, they are often control freaks who are perfectly in control of their behavior and do horrible, abusive things because they are deliberately trying to manipulate and control people. Toussaint did a remarkable job of showing how this works, including showing Vee fix her face into manipulative expressions before talking to people.

But abusers will lie and say they aren't in control of their emotions. Repeatedly, Vee wiggles out of blame by feigning regret and saying she didn't mean to do what she did. But these are lies.

Us against the world. Vee gains people's trust by telling people everyone else is out to get them and only she is looking out for their interests. Spousal and child abuse often works this way, with the abuser telling the victim that family members or other people out there don't see how special they are and only the abuser knows how to care about them.

Guilt-tripping. Telling the victim that they are to blame for your outbursts, because they supposedly did something wrong.

Separating you from your friends and family. Abusers know that the biggest threat to their control over a victim is other people who love the victim and might be able to get them to see that they are being abused. Vee instructs her "children" to not talk to anyone outside the immediate group. If any of her recruitees has a friend outside of her cult-like influence, she systematically tries to destroy that friendship, telling lies about how that friend is a hater or creating unnecessary drama to break up the friendships.

Gaslighting. This abuse technique is one that is hard to explain, but I call it the "don't believe your lying eyes" strategy. (Hat tip to Richard Pryor for the "lying eyes" thing.) This is where the abuser tries to convince the victim that their own perceptions of reality are false and to ignore the obvious in favor of believing the abuser's lies. Vee convinces Suzanne (called "Crazy Eyes") to take the fall for her attack on Red by convincing her that she simply blacked out and didn't remember attacking Red. That's an extreme example, but you see real life versions all the time, such as, "I'm not threatening you, and you'd have to crazy and paranoid to think otherwise" or the perennial favorite of misogynist trolls, "That wasn't sexual harassment, that was flirting."

I particularly like how the show has Vee single out the person who has visible mental illness for the gas lighting. (Suzanne has had episodes where she hit people, but she always remembers them and Vee's task is to get her to believe that she could have hit someone and not remembered it.) If your intention to control someone by telling them they are crazy and to trust your perceptions over theirs, picking someone with an actual mental illness is a smart move, because you can exploit their shame and insecurity over their problems in order to get them to second guess their own memories and perceptions. This is why establishing that the victim is "crazy" is not actually a complete defense against accusations of abuse. "Crazy" people are attractive targets for domestic violence and sexual assault, as well as other kinds of abuse for this reason.

Self-righteousness. Abusers convince themselves they are in the right. Vee takes this so far that she feels justified in killing people.

Anyway, I don't know that I've ever seen a portrayal of an abuser that gets it so well, both from the abuser's perspective and from the victim's. There are many reason to watch Orange Is The New Black---top of the list being how fucking laugh out loud hilarious it is---but I continue to be impressed by how careful and thorough the characterization is, particularly for a show with such a large cast. It really is an actor's dream show.