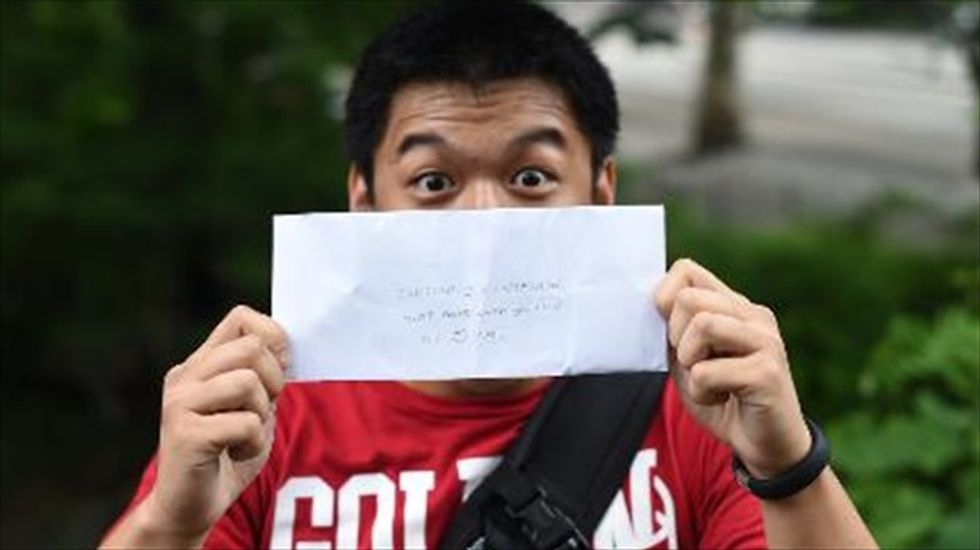 Kurt Dee from Queens, New York, finds an envelope with money as part of the 'HiddenCash' scavenger hunt on June 14, 2014 in Central Park [AFP]

Paris (AFP) - American philanthropist Jason Buzi will not be allowed to stage his quirky @Hidden Cash treasure hunt in Paris at the weekend, police said Wednesday.

"The distribution of money in public is forbidden by French criminal law" and punishable by six months in jail and a 30,000 euro ($40,000) fine, police said in a letter to Buzi, a wealthy real estate investor.

The Internet-driven treasure hunts have participants track down the envelopes using clues posted on Twitter with the handle @HiddenCash.

The Paris police recalled a similar event in the French capital in 2009, staged by a private company, that led to "public disorder" after it had to be called off at the last minute.

@HiddenCash hunts have taken place in US cities including San Francisco, Los Angeles, Las Vegas, New York, Houston and Mexico City, and the Paris edition had been set for Saturday.

Buzi and a group of anonymous friends, who have given to charity in the past, came up with the treasure hunts as something a bit more fun.

One treasure hunt has already taken place in London and another is planned in Madrid.