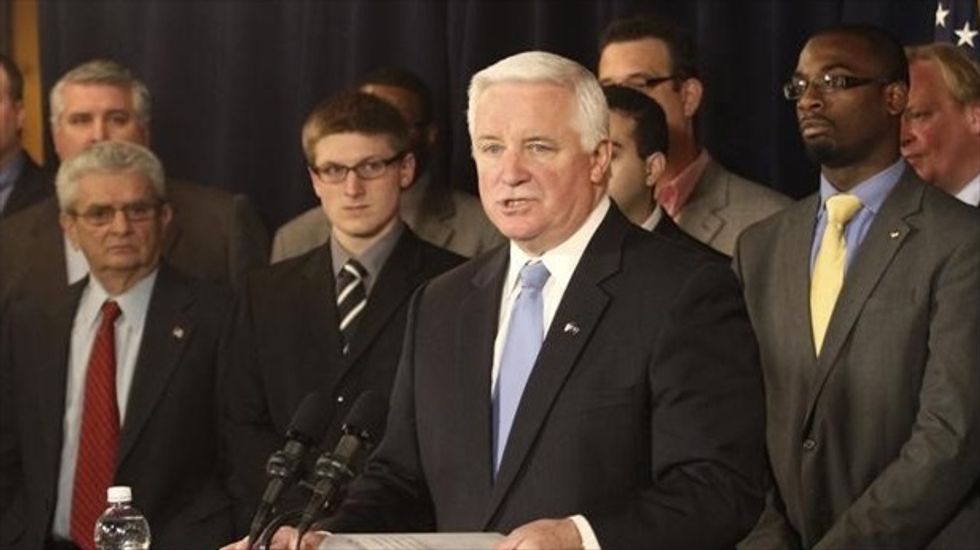 PHILADELPHIA (Reuters) - Pennsylvania's Republican governor called on President Barack Obama on Saturday to intervene to end a transit strike in the greater Philadelphia area and force the two sides to negotiate.

The move by Governor Tom Corbett came hours after about 440 engineers and electricians who operate trains that connect Philadelphia and its suburbs walked off the job.

The strike began at 12:01 a.m. on Saturday, when a mandatory 30-day cooling off period expired in contract talks between the workers' unions and the Southeastern Pennsylvania Transportation Authority.

The 13 regional rail lines stopped by the strike normally provide about 126,000 trips per weekday, with service stretching from the city's northern suburbs to Wilmington, Delaware.

The strike will not affect Philadelphia's subways, buses and other forms of mass transit that make up the bulk of the local transportation authority's system.

Corbett said he asked Obama to convene a Presidential Emergency Board, which would require the striking engineers and electrical workers to return to the job and force both sides back to the negotiating table.

“The people of Philadelphia and the surrounding region expect and deserve a safe and efficient rail system to get them to work, medical appointments, school and recreation," Corbett said in a statement.

If the Democratic president intervenes in the dispute by creating an emergency board, it could prevent workers from striking for up to 240 days during negotiations.

The strike is expected to be less disruptive to Philadelphia area residents this weekend than it would be if it continues until Monday. The rail lines that have been shut down would serve about 48,000 riders on a typical Saturday.

“Be patient, we’re trying to get back to work,” Stephen Bruno, a vice president with the Brotherhood of Locomotive Engineers and Trainmen which is one of the unions representing the striking workers, said at a news conference on Saturday.

The workers have gone without a contract since 2009.

“We're shocked and flabbergasted that they took this move,” Williams said.

[Image: Pennsylvania Governor Tom Corbett speaks at a news conference on the Penn State campus in State College, Pennsylvania on Jan. 2, 2013. By Craig Houtz for Reuters]