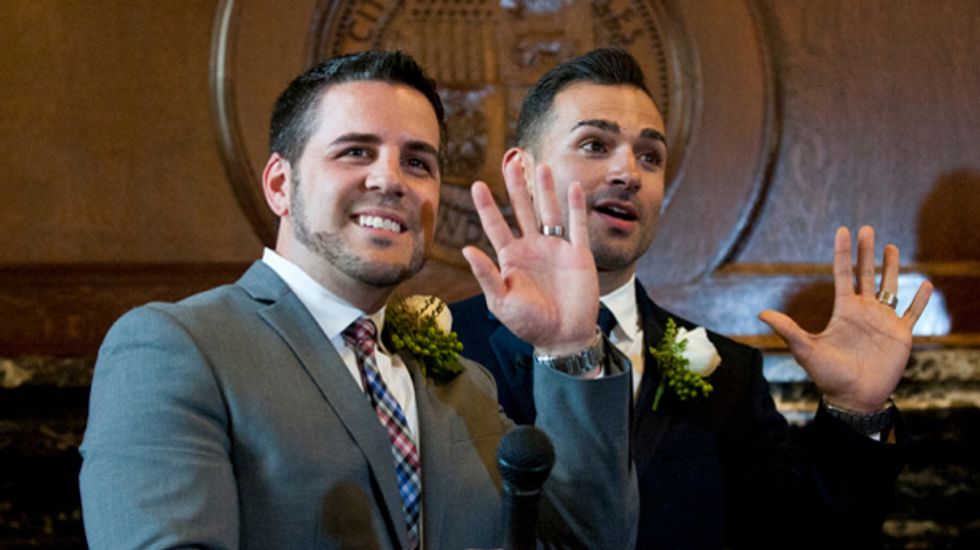 A year after becoming among the first same-sex couples to wed legally in California, two men who were plaintiffs in the case that led to a court overturning the state's five-year ban on gay marriage held a lavish ceremony on Saturday with family and friends including Hollywood stars to celebrate their wedding.

Paul Katami, 41, and Jeff Zarrillo, 40, exchanged vows during a poolside ceremony at the famous Beverly Hilton Hotel, which hosts the annual Golden Globe awards, with more than 100 supporters including three of their four parents, as well as actors Jamie Lee Curtis and Rob Reiner.

"Saying 'I do' changes everything," said Katami. "It gives us the ability to aspire for more, to be respected. We are paying tribute tonight to the people who stood up years ago."

The couple, who have been together for 13 years, were legally wed a year ago at Los Angeles City Hall after the U.S. Supreme Court let stand a federal court's order striking down California's same-sex marriage ban. A federal appellate court panel then lifted an injunction against the marriages.

"We like to say we're a small piece, a chapter in a large book," said Zarrillo. "By no means are we done until there's equality in all states. We still have a lot of work to do."

Several gay stars were on hand, including Guillermo Diaz of television's "Scandal."

"This is something that I feel should've happened a long time ago," Diaz said. "They fought for a right we shouldn't have had to fight for."

Lance Bass, a member of the boy band 'N Sync, attended with his fiance, Michael, and said the couple "had a huge hand in letting us show our love in front of the world."

"The next step is really to have equality for everyone," said Reiner, one of Hollywood's top directors. "There are currently 70 lawsuits in America," Reiner noted, adding "it's just a matter of time. It's inevitable."