Rachel Maddow: What is the Border Patrol hiding inside its 'black box'? 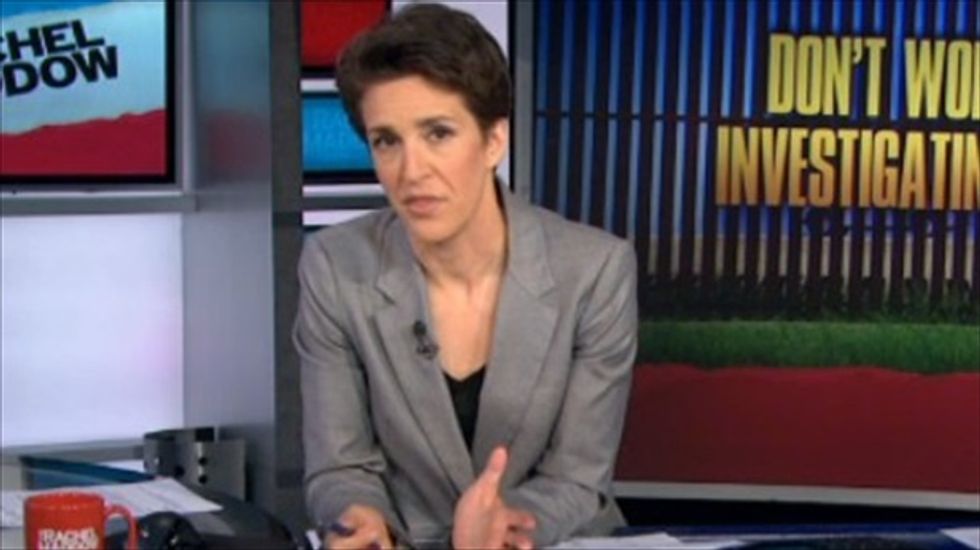 MSNBC host Rachel Maddow said on Thursday that with the increased attention on border security, the Border Patrol's lack of transparency regarding violent encounters with immigrants should be examined more closely, particularly given the timing of a recent personnel change.

"At this law enforcement agency, they don't release any public information about it at all," Maddow said. "How can this be? It's not like this is the CIA running 'black site' prisons and this is a covert op or something. This isn't some military operation in Central Africa run through JSOC and it's all secret. This is American law enforcement, on American soil, and we're not allowed to know when they kill someone? When they kill dozens of people? Or more?"

Maddow noted that the head of the agency's internal affairs department, George W. Bush appointee James F. Tomscheck, was relieved of his duties on Monday and moved to another position in the federal Customs and Border Protection department.

But John Stanton, Washington bureau chief for Buzzfeed, told Maddow that Tomscheck was fired the same day he was supposed to testify before the Senate Oversight Committee.

"For an agency that values its secrecy and is unwilling to talk to the press or members of Congress or the public, really, at all, it does raise a red flag when the guy who would know where all the bodies are buried -- sort of figuratively and literally -- within the agency is suddenly moved the day that he's about to go testify before Congress," Stanton said.

Otherwise, Maddow said, the Border Patrol maintained a "black box" over its operations; while the New York Times reported that "at least" 28 people have been killed by agents over the past four years, it took a Freedom of Information Act (FOIA) request by the American Immigration Council to shed more light on the agency's activities.

Data revealed through the FOIA request found that there were 809 complaints lodged against Border Patrol agents between January 2009 and January 2012, despite the lack of a formal complaint process. Of those, only 13 complaints resulted in disciplinary action against an agent. Forty percent of the complaints were still "pending investigation."

"This is the only information that we've got about this huge law enforcement agency," Maddow said. "A random snapshot of a three-year chunk of some of the complaints filed against them at an agency that doesn't have a single complaint process. These are just the ones that happened to go through an office called Internal Affairs."

Watch Maddow's interview with Stanton, as aired on Thursday on MSNBC, below.