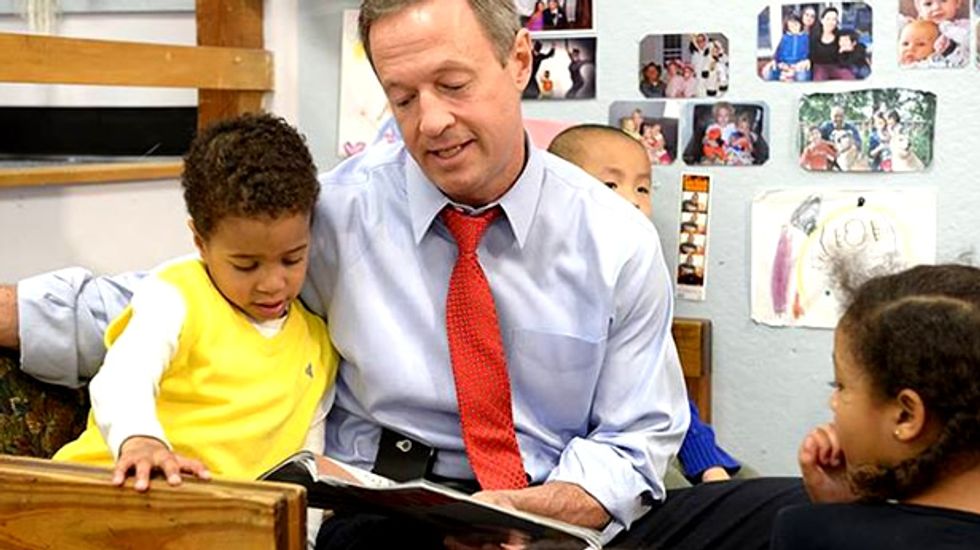 Maryland Governor and potential 2016 Democratic presidential candidate Martin O'Malley's staunch support for the rights of immigrants -- or as he calls them, "new Americans" -- is being characterized by the Republican National Committee (RNC) as "Hispandering."

Governor O'Malley's record on immigration issues is stellar -- his support helped pass the DREAM Act in 2011, his state issues driver's licenses to undocumented immigrants who pay their taxes, and most recently, he informed the Department of Homeland Security that he would not be complying with a program that targets undocumented immigrants for deportation.

Gustavo Torres, the executive director of the Latino and immigration advocacy group CASA de Maryland, told Buzzfeed that O'Malley is "very clearly the most pro-Latino and pro-immigrant governor in the country. He believes we are all immigrants, for centuries we are immigrants. He calls us new Americans because he believes it is a really good way to describe the contribution of the immigrant community."

Or, as RNC spokeswoman Izzy Santa put it, "O'Malley is relying on Hispandering to win."

The neologism "Hispander" was popularized by Rush Limbaugh in a broadcast shortly after Mitt Romney's defeat in the 2012 election. A caller complained that too many Hispanics vote for Democratic "Santa Claus" candidates over fiscally responsible Republicans, which inspired Limbaugh to discuss campaign advertisements that Obama allegedly ran in Mexico about food stamps.

"And do you know what the commercials were about?" Limbaugh asked. "How to get food stamps. Now, what is that? There's a word for that. It's called 'Hispandering.' 'Hispandering.' Advising people how to get free stuff. The Obama administration, commercials in Mexico. What do you call that?"

Izzy Santa echoed Limbaugh's answer to that question, calling what O'Malley has done in Maryland "Hispandering."

However, she noted that what "O’Malley won’t say is that under his leadership 39,000 Hispanics have entered poverty and more Hispanics are earning less due to the 78 new taxes he has imposed on Maryland’s economy...Talking about immigration and hoping no one pays attention to his failed economic record will not overcompensate for his dismissal of the Hispanic community and attempts to play divisive racial politics."