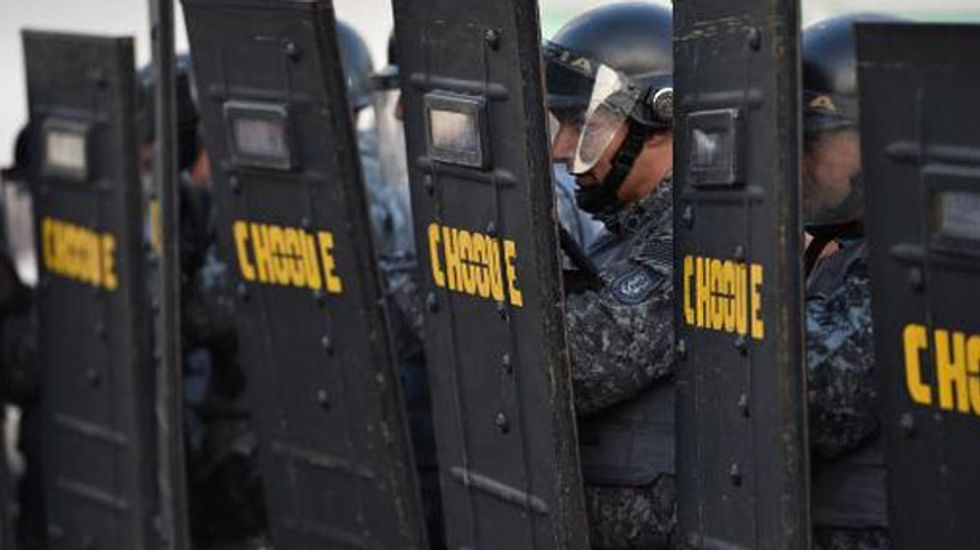 Dozens of protesters gathered near a Sao Paulo subway station with a red banner reading "If we have no rights, there won't be a Cup," saying they planned to march as close as possible to Corinthians Arena, the city's World Cup stadium.

But police carrying anti-riot shields forcefully broke them up before they could start, firing stun grenades and gas.

One officer fired rubber bullets at a shirtless protester who stood in the middle of the street refusing to disperse. Police then detained the man.

The demonstrators had been chanting "There won't be a Cup," the rallying cry of the protest movement against the more than $11 billion in government spending laid out for the tournament, which opponents say should have been used for education, health, housing and transport instead.

Gregory Leao, a 27-year-old law student who participated in the protest, said the demonstrators wanted to invade the stadium.

"The objective is to put an end to the World Cup. We realize we're not going to achieve it, but we believe Brazilians should rise up," he told AFP.

The sprawling South American country was visibly divided Thursday between excited fans decked out in green and yellow in fervent support of the national team and those fearful of anti-World Cup protests or determined to join them.

'Ready for war': Unarrested #PoleTosser rioter flagrantly taunts FBI, poses with GOPers and 'patrols' the border with his pals

He’s known as “AFO #258” on the FBI’s most wanted list, signifying that he’s one of the individuals sought by the agency for involvement “in violent assaults on federal law enforcement officers at the US Capitol on January 6, 2021.”

The volunteer online sleuths who have been poring through open-source video and matching images to social media profiles for the past 11 months have a catchier name for Lucas Denney. They call him #PoleTosser, a nicknamed earned when Denney launched a giant wooden pole toward a line of police officers in the midst of a pitched battle on the West Plaza as rioters lobbed projectiles and the two sides exchanged blasts of chemical spray.

'Ready for war': Unarrested #PoleTosser rioter flagrantly taunts FBI, poses with GOPers and 'patrols' the border with his pals