Saudi researchers point to camels as source of MERS outbreak 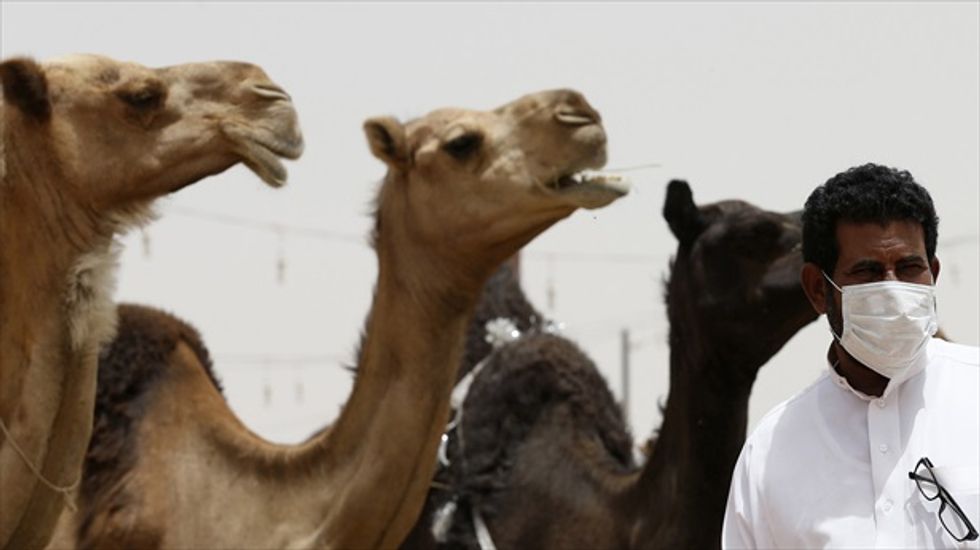 LONDON (Reuters) - A Saudi man who became infected with and died of the new Middle East Respiratory Syndrome (MERS) virus contracted the disease from a camel in his own herd which was also sick, scientists said on Wednesday.

In a study which reinforces the case against camels as the prime suspects for transmitting the deadly virus from the animal world into people, researchers said that in this case it was highly likely the animal's nasal secretions were to blame.

MERS, also known as MERS-CoV, has infected 691 people and killed at least 284 of them in Saudi Arabia alone since it first emerged in 2012.

Sporadic cases of the disease, which is caused by a virus from the same family as Severe Acute Respiratory Syndrome or SARS, have also been reported across the Middle East region, as well as in Europe, Asia and the United States.

Documenting the case of a 44-year-old previously healthy Saudi man who died of MERS on November 18, 2013, Saudi scientists led by Tariq Madani said their analysis suggested a so-called zoonotic event - when a virus circulating in animals makes a jump into the human population.

"The patient had applied a topical medicine in the nose of one of the ill camels seven days before onset of the patient's illness," they wrote in the study in the New England Journal of Medicine.

Genetic analysis of samples taken from the victim and from the camel in question - a one-humped or dromedary camel in a herd of nine owned by the patient - suggested the virus had passed directly from the animal to the man, they concluded.

Infectious disease experts not directly involved in the study said its findings added to a growing body of evidence that camels are a likely source of the outbreak.

"This is a further strengthening of the case for camels being an immediate source of human MERS infection," said

Ian Jones, a professor of virology at Britain's University of Reading.

"It supports what we thought was going on - i.e. (that)MERS-CoV transmits from camels to humans...rather than the other way around," said Jake Dunning of the center for respiratory infection at Imperial College London.

"Other studies looking at the link between MERS-CoV in camels and humans have suggested this, but the evidence was somewhat weaker."

A study published in August 2013 was among the first to suggest camels in the Middle East may be an animal reservoir for MERS virus infections, which can cause coughing, fever and pneumonia in people.

Experts cautioned, however, that scientists in the region should not stop searching for other potential animal sources, or stop investigating cases of human-to-human transmission.

"Several research groups have shown that this virus can be found in camels (and in bats) and that camel-to-human transmission of MERS-CoV is likely, but how do we explain infection in other patients outside of hospital outbreaks?" said Dunning.

"We really need detailed epidemiological studies in affected countries, including carefully conducted case-control studies. At the same time, we should continue to look for other animal and environmental reservoirs of the virus."

The Saudi health ministry, which has come in for criticism from international scientists and public health experts, said on Sunday it had set up a new command and control center to try to tackle MERS more effectively.

[Image: A man wearing a mask looks on as he stands in front of camels at a camel market in the village of al-Thamama near Riyadh May 11, 2014. By Faisal Al Nasser for Reuters]

Authorities in Brooklyn Center had a press conference on Monday following the fatal police shooting of Daunte Wright, and one top Minnesota lawyer says it did not go over well at all.

Film lovers tired of tedious Zoom-based Hollywood awards shows can rejoice -- producers of the glitzy in-person Oscars this month are bringing in the big guns, with Harrison Ford, Brad Pitt and Reese Witherspoon among an A-list lineup of presenters unveiled Monday.

The April 25 ceremony, to be primarily held at Union Station in downtown Los Angeles, comes as California accelerates its reopening after a year of Covid-19 closures, buoyed by a vast vaccination rollout, and will follow a glamorous "awards-show-as-a-movie" theme, the Academy said.

Gov. Ron DeSantis doesn't want anything to do with the expanding problems of Florida Republicans like Rep. Matt Gaetz (R-FL) and former tax collector Joel Greenberg.

According to Florida Politics, DeSantis dodged questions about Gaetz on Monday when asked. The two men seemed attached at the hip during the 2018 election, appearing at several events together. There don't appear to be any photos of the two men anywhere on DeSantis' campaign page, but there certainly are on Gaetz's page.