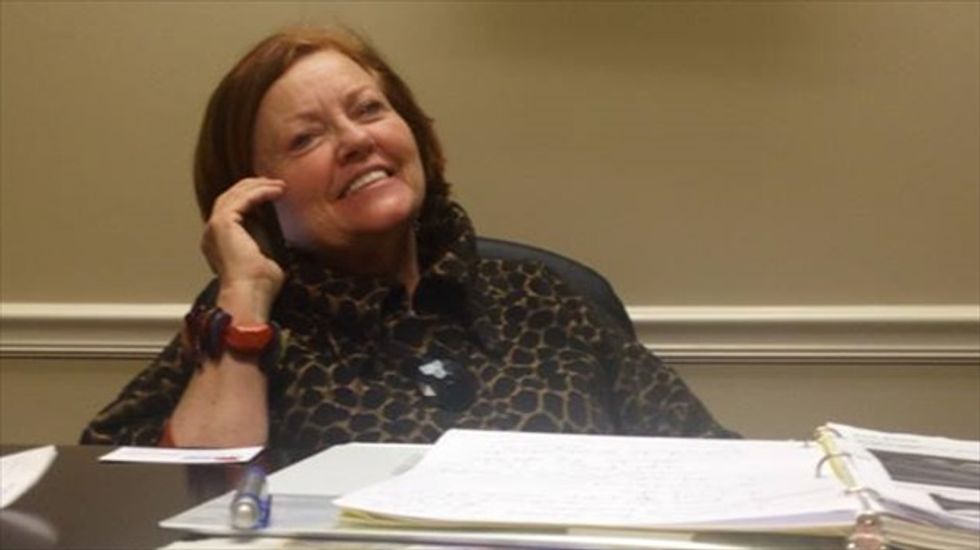 Sally Atwater, who is running to become South Carolina's state superintendent of education, was denounced by a conservative talk show host in South Carolina after an awkward interview concerning her views on sex education last week.

"I don't want to be brutal. I don't want to be mean. I just want to be realistic," host Russ Cassell said after the June 11 interview on his show. "What you have just heard is an example of a person running for public office on name recognition only who is clueless."

Cassell interviewed Atwater, the widow of Republican strategist Lee Atwater -- who is widely associated with the GOP's "southern strategy" -- after she qualified for a GOP primary runoff to be held on June 24. Sally Atwater received 63,387 votes, enough to put her in second place among the eight Republican candidates for superintendent.

The interview began on a relatively agreeable note, with Cassell calling Atwater's opponent, Molly Spearman, "a Democrat" and expressing disbelief that Spearman placed first in the primary with 64,758 votes. But Cassell seemingly could not get Atwater to criticize the state's open primary voting system, which he criticized for opening the door for Democrats to influence Republican primaries. The conversation deteriorated further when Cassell asked Atwater for her position on sex education in public schools.

"What does that mean?" Cassell asked, following up.

"Well, we have certain health standards that we still teach," Atwater responded. "And so that's what I'm going to do right now. And the parents are given options whether or not to attend these classes."

"I understand. But, you do think, then, that it is appropriate for kids to be taught about sex education in a public classroom," he said. "You do think that's appropriate."

"That is a parental option, sir," Atwater said, not confirming his statement. Cassell then told her he was looking for her opinion, then sighed and asked her for her opinion on the issue as a mother.

"My girls at that point went to parochial school," Atwater said, seemingly laughing. "So it was a different philosophy."

"With all due respect, Ms. Atwater, you're avoiding me," Cassell said. "That's not what I'm asking."

"You're pressing me," Atwater said, her voice raised.

"Of course I'm pressing you," he responded. "You're running for superintendent of education."

The two did find common ground on teaching abstinence in public schools, with Atwater saying she thought it was appropriate.

"I think it's one of our methods of birth control, don't you?" she asked Cassell.

"Absolutely. Works every time it's tried," he said.

However, the interview stalled again when Cassell asked Atwater for her views on teaching evolution in public schools.

"I'm going to go back to what our science standards are," she said.

"What are our science standards?" Cassell asked.

"Our science standards, that's what we teach in our schools now," Atwater told him.

"Oh, I know that," he responded. "I just wonder if, specifically, you knew what they were, since you want to be superintendent of education."

"I do, but I'm not going to go any further than that on that right now," she said, at which point Cassell ended the interview.

After the interview, Cassell read emails from listeners who said calling her clueless was "kind" on his part, and who said she sounded "like a Democrat."

The State reported on Monday that Atwater turned down an invitation to debate Spearman on the state's education channel, ETV.

Listen to Cassell attempt to get Atwater's views on sex education, as posted online on Saturday, below.