Search for survivors begins after tornadoes sweep through northeastern Nebraska 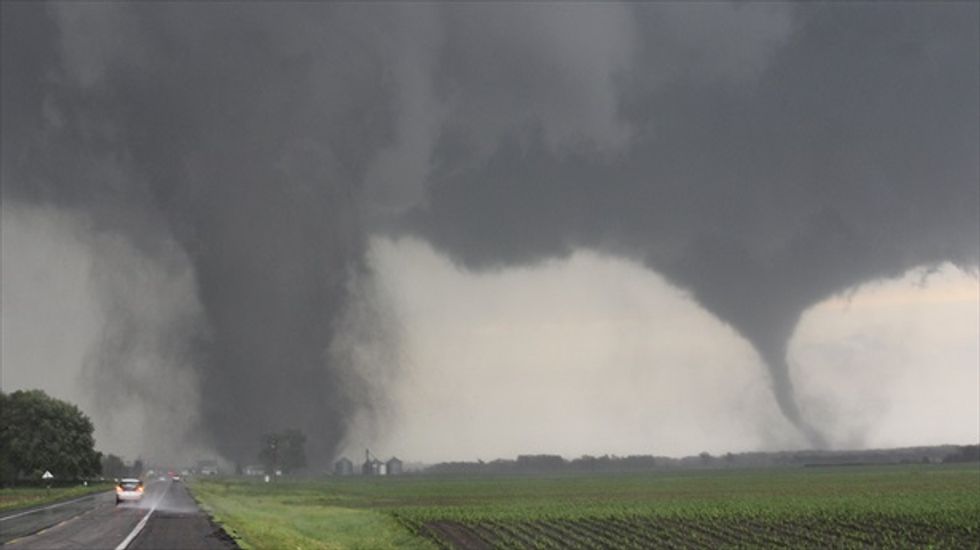 (Reuters) - Two large tornadoes swept farming areas of northeastern Nebraska on Monday, causing severe damage to at least one town and some injuries, according to officials and media reports.

The tornadoes, part of a super-cell thunderstorm system, cut a swath across northeastern Nebraska, uprooting trees and leveling homes, officials said. The still-dangerous storm system was headed into northwestern Iowa.

The towns of Pilger and Stanton had suffered damage and emergency officials were searching for survivors, said Al Vacanti, city administrator for the nearby town of Wisner.

"Pilger is totally destroyed. We're heading there to help out," said Cathy Ruppert, wife of Stanton council member Mike Ruppert. She did not know whether there were injuries.

Pilger has a population of just under 400 people, according to the town's website.

Vacanti said there was a report of a fatality in Pilger, but this could not immediately be confirmed. Local emergency officials were not immediately available for comment.

Photos of damage to the town of Pilger posted on the Omaha World Herald website showed trees stripped of branches and flattened and severely damaged buildings. The Weather Channel said it had also received reports of injuries in Pilger.

A storm chaser video on the Weather Channel showed two large tornadoes in the same video frame tearing across primarily farmland near Stanton, Nebraska. "This is one powerful storm that moved across our area and we do believe there is still a threat for strong, severe thunderstorms including the potential for tornadoes," said Barbara Mayes, a National Weather Service meteorologist in Omaha.

Mayes said it was quite rare to see two powerful tornadoes on the ground at the same time.

Severe thunderstorms were stretching across southern Minnesota, northern Iowa and were expected to move into western Illinois and Wisconsin later on Monday, said Bill Bunting, a forecaster at the Storm Prediction Center in Norman, Oklahoma.

The Nebraska governor's office was receiving reports on the tornadoes from state emergency officials, but had no word on the extent of the damage or injuries, spokeswoman Sue Roush said.

(Reporting by Mary Wisniewski in Chicago and David Bailey in Minneapolis; Editing by Peter Cooney and Jim Loney)