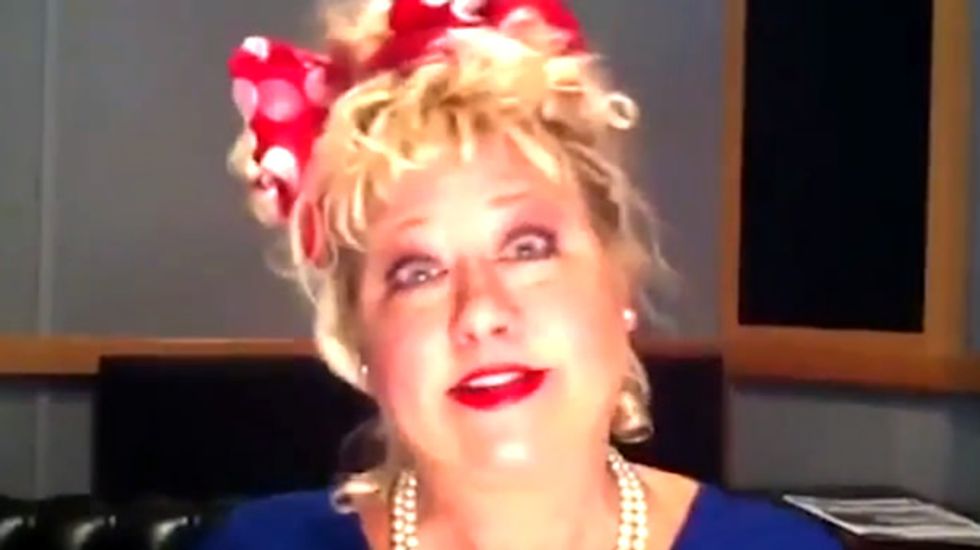 She then introduces herself, saying she's talking to singer-songwriter Buddy Kalb about Saul Alinsky's Rules for Radicals. "You know, Obama taught a course on it," she said, "and he's ruining our country by it."

"I know you might have heard this before, but it's dedicated to Lucifer," she said, holding what appears to be the dedication page of Alinsky's book up to the camera. "Anyway, I was just talking to Buddy about the state of our country, and I wanted to ask him why he thinks you should vote for me."

The commercial then abruptly cuts to an older, white woman yelling, "Hey government! Keep your hands off the Internet," followed by Victoria Jackson asking people why people should vote her.

"Because she is all for 'We the People,'" said a Starbucks barista she identified on her blog as "Zach, the guitar teacher/singer/songwriter," who then proceeds to play a moving acoustic rendition of "Amazing Grace" on his guitar.

The commercial ends with an exhortation to "seriously, vote for Victoria Jackson [on] August 7, 2014...if you love freedom."

The position for which she is running for, county commissioner, largely entails the drafting and adopting of the annual budget, including the general, school, and highway funds. Despite Jackson's oft-stated hatred of Common Core, the position of county commissioner would afford her no discretionary control over the school budget.