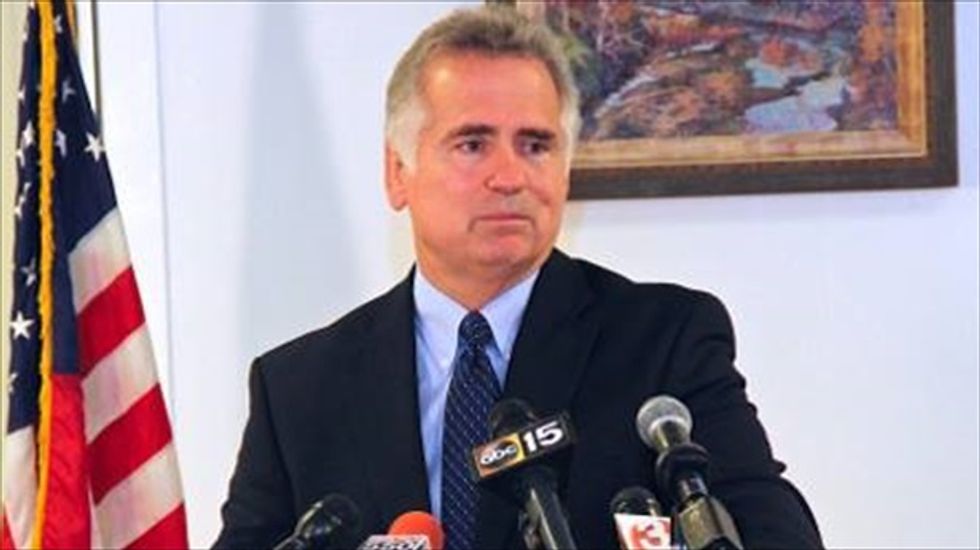 Arizona state superintendent John Huppenthal (R) broke down in tears on Wednesday while apologizing for online comments denigrating Latinos and African-Americans, yet refused to resign despite mounting pressure, the Arizona Republic reported.

"I've thought about it deeply, especially given my comments about bringing honor to the system," Huppenthal said at a press conference. "Obviously, my hurtful blog comments didn't do that."

"It was Darwin who expressed approval of eliminating both Jews and Africans," Huppenthal wrote in September 2013 on the conservative site Seeing Red AZ. "Hitler worked to eliminate the Jews. Margaret Sanger, founder of Planned Parenthood was given the job of eliminating African-Americans. Hitler fed 6 million Jews into the ovens. Sanger has fed 16 million African-Americans into the abortion mills."

Huppenthal admitted making the comments to the Republic last week, but defended them in a statement (PDF) by saying they were his way of encouraging public discussion, and that his comments were taken out of context.

"[Sanger] was at the heart of a eugenics movement, clearly reflected in her writings," Huppenthal said in his statement. "In hindsight, I do regret my choice of certain inflammatory words, but I will never apologize for being a pro-life policy maker, or someone who believes in improving conditions for all people."

He also said his comment referring to people receiving "food stamps" benefits as "lazy pigs" getting "flat-screen TV's" was a reference to the nursery rhyme The Little Red Hen. In that story, he said, a "fat lazy pig refuses to help the little red hen sow her seeds."

On Wednesday, Huppenthal's press conference ended when he expressed sympathy for chief of staff Merle Bianchi for having to respond to press inquiries over the comments, then began to cry.

At the same time, he reaffirmed his desire to run for re-election. The state primary is scheduled to be held on Aug. 26.

"I plan to go forward in service, both in the service I'm in, and on the election front," he said.