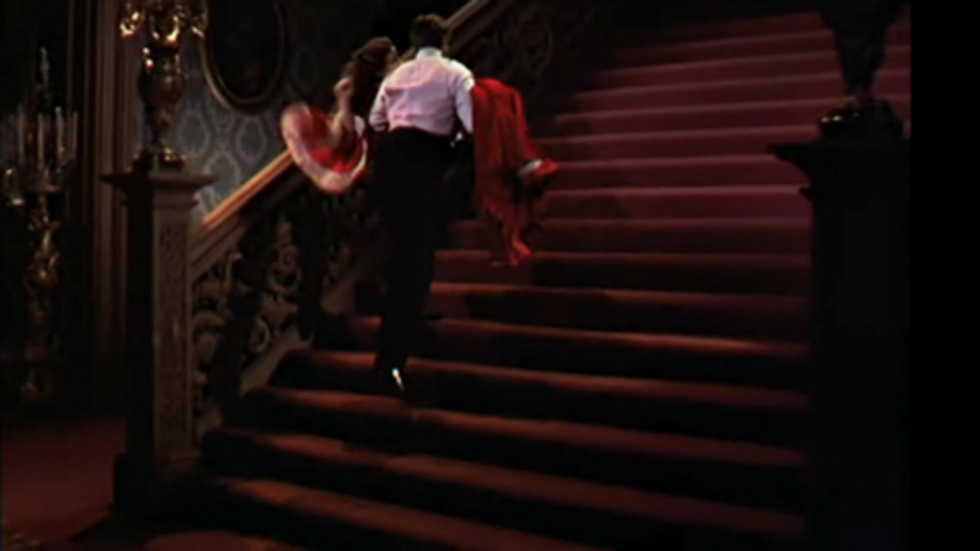 He didn't even mention Clark Gable, probably because one of his most famous scenes is him literally raping his wife as she fights him.*

Ross Douthat, as everyone knows, is on a crusade to blame basically anything that goes wrong in society to that sordid imaginary day, occurring sometime in 1963 or so, when women suddenly started to like sex and sent the world straight on its path to hell, one lady-gasm at a time. So, with a plodding predictability, he had to stick his pointless opinions into the discourse about the UCSB shooting by asking for a cookie for admitting misogyny might exist but then trying to insinuate that it didn't really exist prior to the sexual revolution. (Which is basically an inverse of all known evidence on the historical trajectory of women's rights in America.) Katie McDonough took one for the team and has an analysis of it. But I want to talk about one particular little tidbit that really shows what a piss-poor thinker the "intellectual" conservative Ross Douthat really is.

In a tedious piece titled "The Left and Masculinity", Douthat basically, in way too many words, tries to argue that the troubling images of masculinity today that inspire the anxious masculinity dudes---read, shoot 'em up action movies and the like---are far more misogynist than the images of masculinity that Hollywood proffered in the pristine, idealized days prior to the evil 60s. While pretending to have a "complex" view of the issue, it's fairly clear that he's arguing that traditional masculinity was pretty much the shit, and it's only in recent years that masculinity has grown sour, something for which he explicitly blames feminism for.

And I just don’t quite know what he’s talking about, because in our culture — Western, English-speaking, American — the traditional iconography of masculine heroism doesn’t really resemble this “Grand Theft Auto”/”Scarface” description at all. I mean, yes, if the “tradition” you have in mind is Pashtun honor killings, then I agree, traditional masculinity would be better off extinct. But where American society is concerned, when I look at the sewers of misogyny or the back alleys of “bro” culture, I mostly see men in revolt against both feminism and our culture’s older images of masculine strength and self-possession, not men struggling to inhabit the latter tradition, or live up to its impossible/immoral demands.

As evidence, he argues that back when men were men and women knew their place, Hollywood icons of masculinity were so much less misogynist than they are now. John Wayne characters are "reluctantly shouldering a burden of violence and paying a heavy moral price; not as often as you see men (including Wayne in several of his most iconic roles) who don’t get the girl, don’t get sexual fulfillment (not a major theme of the genre, to put it mildly) or the life of domesticity they want, precisely because of their identity as gunslingers and the obligations and/or sins that accompany that way of life."

And then you have the less cowboy-y ones. "A Humphrey Bogart, a Jimmy Stewart, a Cary Grant, a Spencer Tracy — these were icons whose characters often dealt with female stars as equals, who had sex appeal to burn but weren’t defined by their libidos or their list of conquests, who dealt in violence sparingly or not at all."

Starting a list of actors whose roles "dealt in violence sparingly" with Humphrey Bogart should alone tell us all we need to know about how much actual thought Douthat put into this piece, instead of putting all his brain power towards finding phrasings that sound smart enough to bamboozle readers into thinking he actually is smart. But let's set that aside and examine the broader idea he's stabbing at here, which is that we can look to movies that came out before the 60s and the second wave of feminism and see men who were nice and respectful to women, instead of angry all the time because women started to argue they were equal. Did these male movie stars refrain from misogynist displays of dominance over and even violence towards women? Let us examine the evidence. 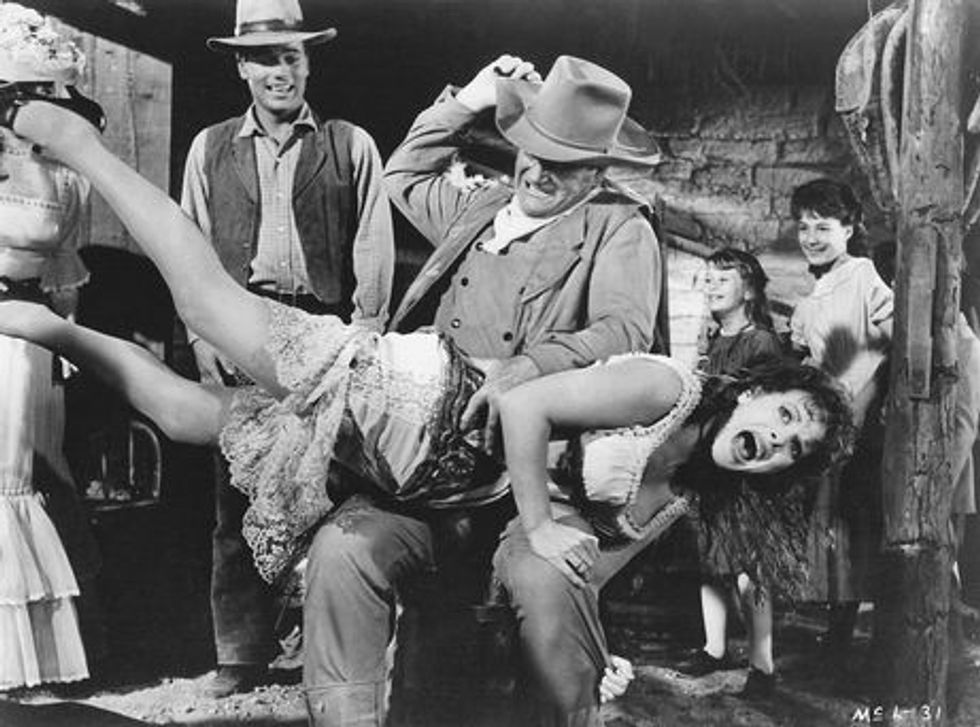 This scene of Wayne spanking Maureen O'Hara with a coal shovel until she agrees to move back in with him was considered such an important part of the movie (and is apparently the second scene involving a man beating a woman until she agrees to be with him) that it's featured on the poster. One of Wayne's most famous movies is The Searchers, where the plot hinges on he and some other white men trying to force Natalie Wood to leave the Comanche she lives with, one of whom is her husband. While Wayne's character is eventually talked out of killing her rather than "let" her live how she wishes, he and his friends still kill her husband and drag her back to her white family. (Arguably, this is a movie that's more ambivalent than it might seem from a plot description about race and gender issues, but it's also nonsense to suggest Wayne is playing someone who has respect for women.)

I love film noir, which is where Humphrey Bogart really became a star, but they also concoct lots of excuses for men to be violent against women. Witness starting at 1:30:

Jimmy Stewart often played overt misogynists, particularly in Alfred Hitchock movies. Vertigo, where he plays a man who stalks and intimidates and bullies a woman into becoming the image of a woman he once loved is a pretty good example. There's no hitting that I remember, but he does treat her really poorly and this is driven home by some really uncomfortable attempts to force sexual contact. 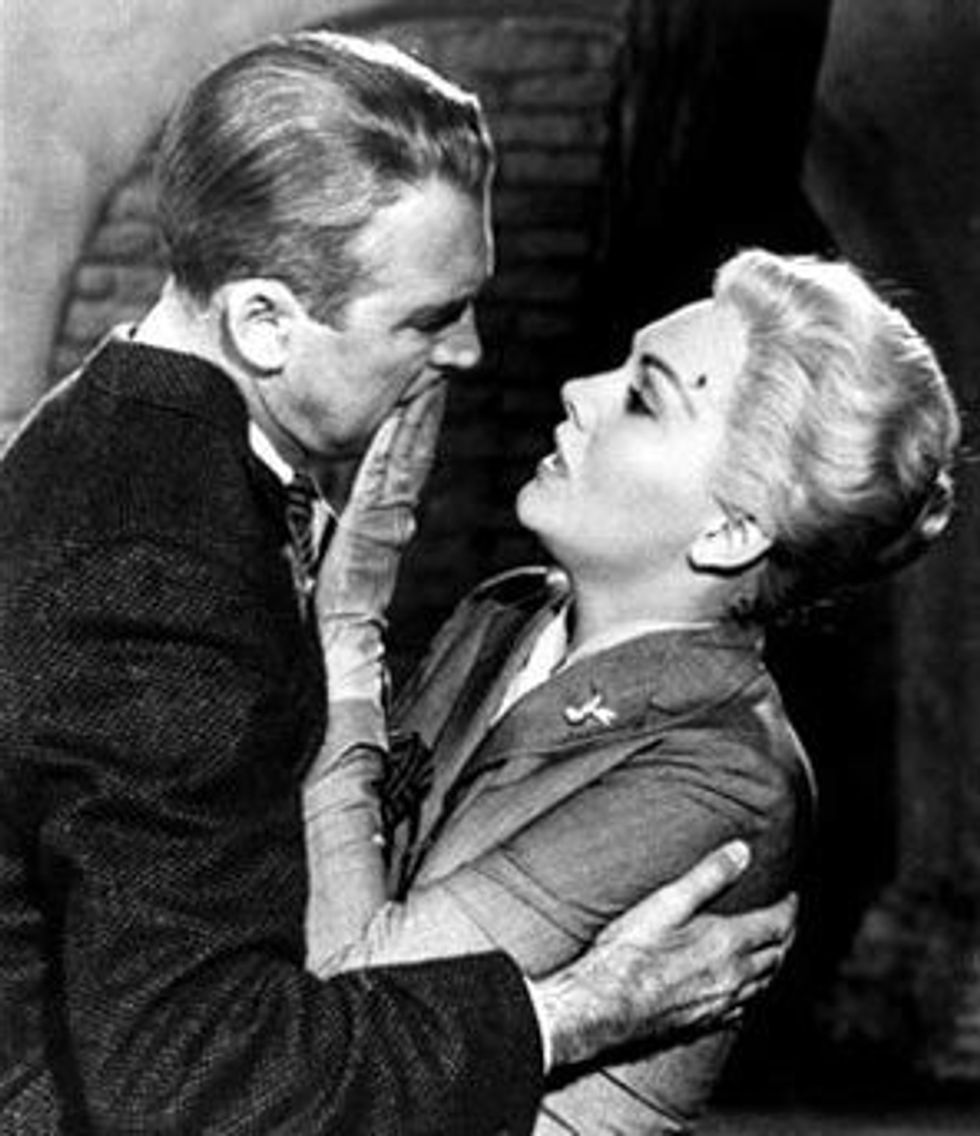 Like The Searchers, this is all presented in a way where it's easy to read it as critical of the main character's behavior, but again, it certainly is evidence against Douthat's romanticizing of the past and suggestion that the pre-feminist era was largely about images of masculinity that are gentle and non-misogynist in nature.

As for Cary Grant, well: 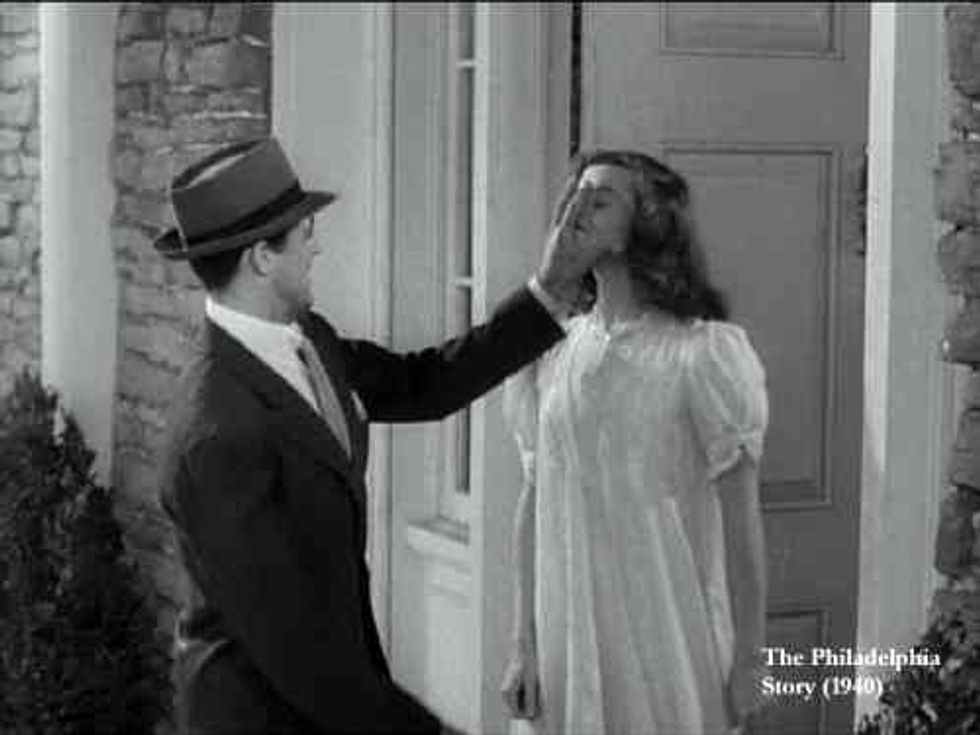 Yep, that's our hero shoving his ex-wife, Katharine Hepburn, in the face in the movie The Philadelphia Story. This movie has a number of jokes about domestic violence in it, and it's all very uncomfortable to modern audiences, because no one seems to take it very seriously.

This was all done off memory, and I can't remember any scenes of Spencer Tracy slapping or hitting or shoving women, but I think my point is made. But if you can think of any in comments, feel free to share and I'll add.

*To be clear, while I like some of the movies I mention on this list, Gone With The Wind is a irredeemable pile of trash that seems to exist mainly to endorse rape culture, minimize the evils of slavery, and insinuate that the Union were the bad guys in the Civil War, instead of the people who committed treason to protect slavery.