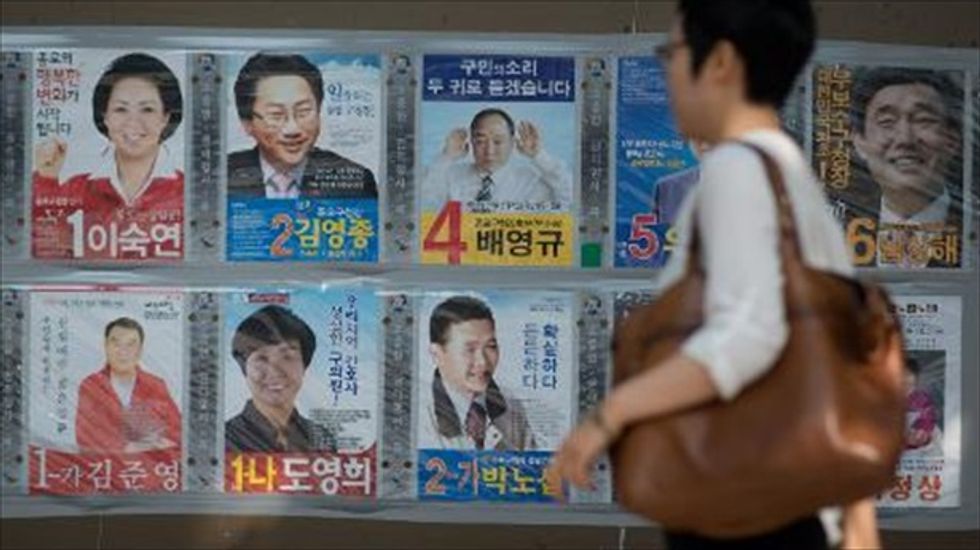 The posters of local election candidates are dispolayed on a wall in Seoul on May 29, 2014 [AFP]

Park's administration has been sharply criticised for its response to the tragedy and the polls provide the first real opportunity to measure just how serious the political impact has been.

"Other issues have largely been swept aside and the real question has become about defending Park or holding her to account," Choi said.

The high popularity ratings Park has enjoyed since taking in office in February 2013 have been hammered by the disaster, which has become the defining moment of her presidency so far.

The investigation into the sinking of the 6,825-tonne Sewol on April 16 exposed a culture of institutional negligence, greed and incompetence that contributed to the scale of the tragedy.

Although these problems have roots stretching back decades, Park and her ruling conservative Saenuri Party have become a focus for much of the public grief and anti-establishment anger.

As a result, Wednesday's elections for 17 new provincial governors and municipal mayors, as well as numerous local councils, have taken on the trappings of a referendum.

Politics in South Korea, and especially local politics, have a strong regional bias, with ingrained support for certain parties that rule out any major shift in the national political landscape.

But the main opposition New Politics Alliance for Democracy (NPAD) is hoping that dissatisfaction with the Saenuri Party will translate into victories in a number of key mayoral and gubernatorial races.

And its strategy has been to unashamedly place the ferry tragedy at the heart of its campaign.

"If people don't act, the ship called the Republic of Korea will sink just like the Sewol did," NPAD leader Kim Han-Gil said Tuesday.

"The irresponsible Saenuri Party is only interested in protecting the president, not the South Korean people. And people will punish them with their votes," Kim added.

Fuelling the NPAD's hopes, the disaster has already buffeted South Korea's "miracle" economy with consumers abstaining from dining out, drinking and shopping in their usual numbers as a sense of national grief takes hold.

Opinion polls suggest the party's strategy is paying off.

In the most high-profile contest of the election -- the race for Seoul mayor -- the popular incumbent Park Won-Soon has seen his lead over Saenuri rival Chung Mong-Joon widen into double figures following the Sewol disaster.

President Park's predecessor, Lee Myung-Bak, was a former Seoul mayor and there is speculation that whoever wins Wednesday's vote in the capital will use the position to set up a presidential run in 2017.

South Korea's second largest city Busan has always returned a conservative mayor, but this time around the Saenuri candidate, Suh Byung-Soo, is facing a serious challenge from an opposition-backed independent.

"All candidates from the party, including myself, feel deep guilt and responsibility for being unable to save the children on the Sewol," Suh said Tuesday in a final appeal to voters.

"But citizens of Busan, you made Park the president. Please help wipe away the tears she shed in the wake of the Sewol sinking," Suh said.

His plea referenced a televised address Park made to the nation last month, in which she tearfully accepted responsibility for the mishandling of the disaster.

At the end of her emotional speech, Park argued that, for all the trauma inflicted by the sinking, the time had come to "leave frustration behind and move forward."

The results of Wednesday's polls will offer the first real indication of whether South Koreans are willing to do that.