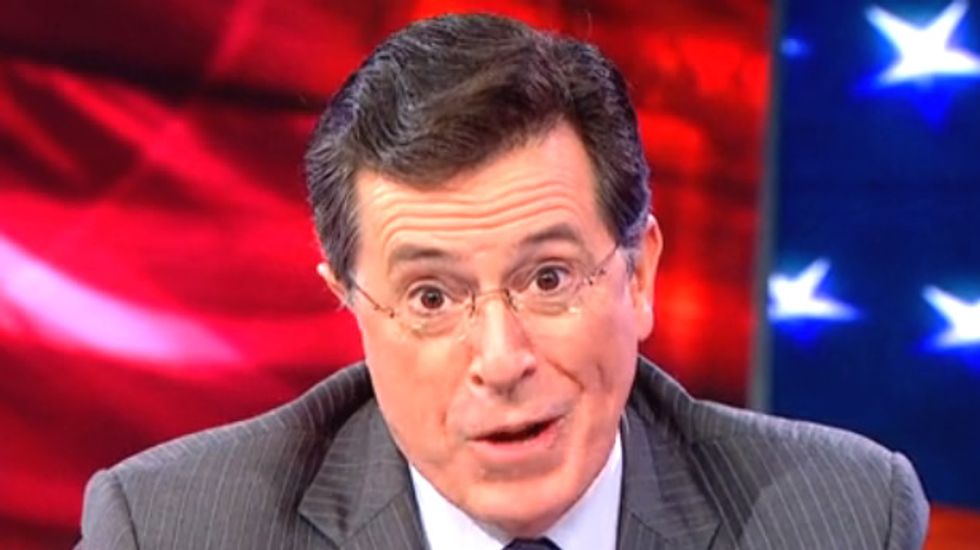 On Wednesday's Colbert Report, Stephen Colbert went after Fox News' continuing coverage of the attack on the U.S. consulate in Benghazi.

Ever since "the tragic attack," Colbert began, "there has only been one question." He then played four clips of Fox anchors complaining that in the two years since the attack, "none of the people responsible have been arrested."

"Yes," Colbert replied, "we must bring those responsible for Benghazi to justice. But sadly, Hillary Clinton remains at large."

"But," he continued, "yesterday this happened." He then played an ABC News clip about the arrest of Ahmed Abu Khatallah, the alleged "mastermind" behind the attack.

"Alright," he said excitedly, "we've got our man! Justice has been served! USA! USA! USA! Is what they want us to think! But it's going to take more than what we demanded to satisfy us."

"Why did it take so long to bring him to justice," one Fox anchor Colbert cut to asked. "For those keeping track," another added, "it's been 642 days. This guy's been drinking strawberry frappes and lattes for 642 days! What's up?"

"Yeah," Colbert replied, "what's up? Why did it take so long? President Bush did not wait 642 days to catch bin Laden. If he didn't catch him right away, he wasn't going to catch him at all. That's called having some pride!"

"Folks," he concluded, "we will have more on this story as soon as I can figure out why it is bad."

Watch the entire June 18,2014 episode of The Colbert Report via Hulu below.