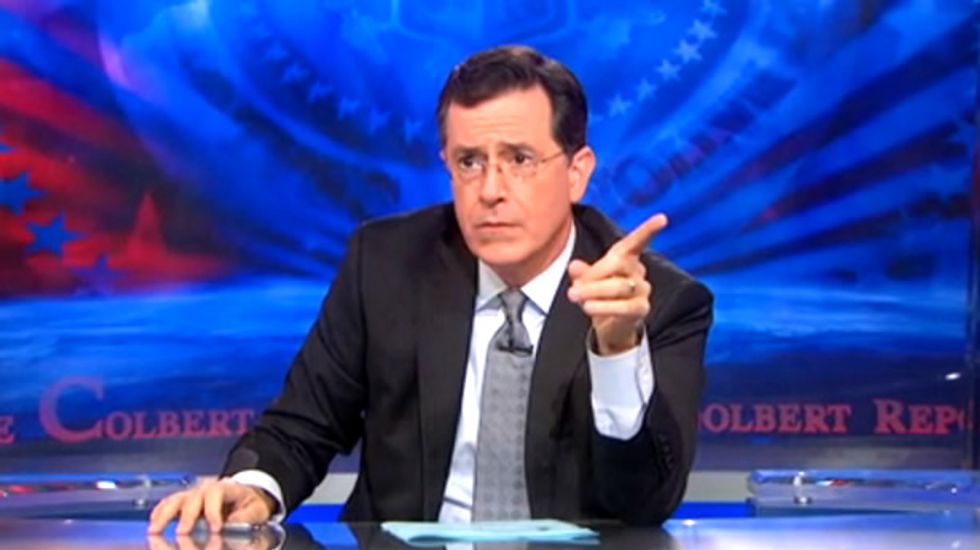 On Wednesday night's episode of The Colbert Report, Stephen Colbert discussed the crisis of children from Central America illegally crossing the U.S. border and being detained in Texas.

"I only bring this up," Colbert began, "because I believe in the American dream. When my great-great-grandfather braved the Atlantic crossing, he came here with the hope that his new country would never be ruined by a bunch of filthy immigrants."

"And sadly, America is once again awash in unwashed masses," he continued. "But this time they're pouring across the long, skinny ocean to our south -- the Rio Grande."

After a clip about the plight of Central American children crossing this border alone, Colbert added that "the numbers are shocking -- so far more than 47,000 migrant kids have entered the country and been caught since October 1st."

"To put that in perspective, if you stacked 47,000 kids end-to-end, you could probably get a job in that holding facility," he said. "It's an incredibly tough situations -- for the employees."

He then played a clip from ABC News in which the anchor noted that the children in these holding facilities complained that their breakfast burritos were made with flour tortillas.

"Do you expect me to believe," Colbert asked, "that not all Hispanics eat flour tortillas?"

He then showed a Fox News clip about the "rumor mill" in Central America that is allegedly driving these children to cross the border with the promise of "permits" for unaccompanied minors.

"Parents are just dropping their kids off and then disappearing?" Colbert asked. "Please, Texas is not the ball-pit at Ikea! I don't buy it!"

"Folks," he said, "these kids say that they're coming here to escape poverty and violence, but my conservative colleagues and I know that the more likely explanation is the one we like more. Just follow Texas Governor Rick Perry as he puts his head up his own rabbit-hole."

Perry, in an interview with Fox News, is then seen saying that the Obama administration is either "incredibly inept, or in it somehow or other. I hate to be conspiratorial, but how do you move that many people from Central America across Mexico and into the United States without there being a fairly coordinated effort?"

"I hate to be conspiratorial too," Colbert replied, "but 1) thousands of kids streaming up from Central America, and 2) Obama. It makes perfect sense! Obama's organizing bus trips from Central America, so these kids can grow up in America and become citizens through some future, somehow passable immigration bill, all so they can vote and deliver Obama his fifth term in 2024."