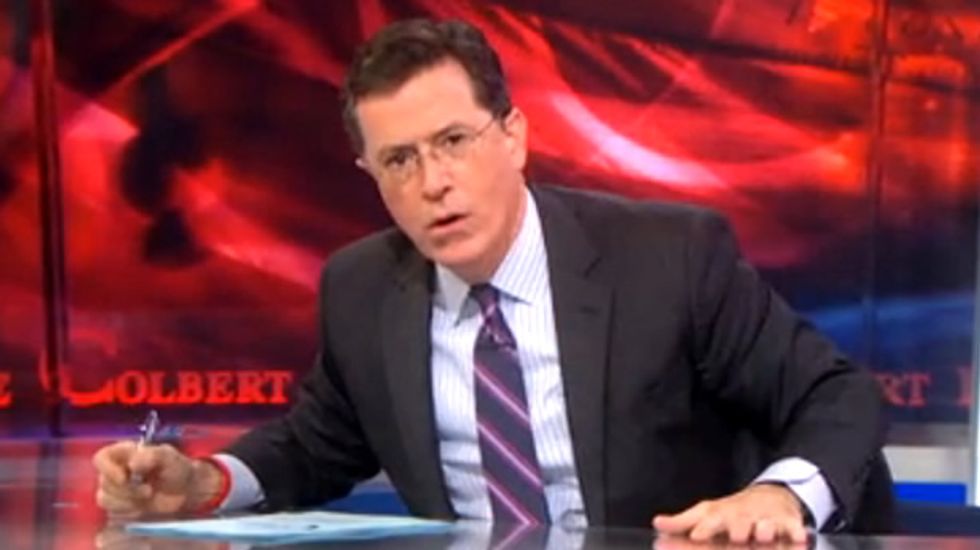 Colbert then said that, "like you, I've been bitten hard by the soccer bug -- also known as Luis Suarez."

"And I'm not alone, folks," he continued. "A record 25 million people watched the U.S.'s game against Portugal, and that has me worried. American's don't care about the World Cup -- what's wrong here?"

"Well, if you want experts on wrongness, you want Fox Business," Colbert said, before cutting a clip of Fox's in-house psychiatrist, Keith Ablow.

"Why are we seeing soccer suddenly skyrocket?" Ablow asked. "Why are we so ready to be entertained?"

"I'll tell you why," Stuart Varney replied. "It's because the news background about our country, our economy, our standing in the world, is overwhelmingly negative. It is awful. We're approaching a recession, we've lost in Iraq, we're downgraded the world over. We don't want any part of that. We want to escape. So here's the World Cup -- how convenient."

"Yes," Ablow said. "It's a little too convenient when we have a president who, I contend, has it in for Americans, and we elected him because we were fearful at the time -- 'We better elect someone who's not patriotic because, God, we could have terrorists attack us for being Americans.' So, we did that."

"Yes," Colbert replied. "We did that. Check that box. Which brings us to the World Cup. Follow me down the rabbit-hole."

Watch the entire episode of The Colbert Report below via Hulu.