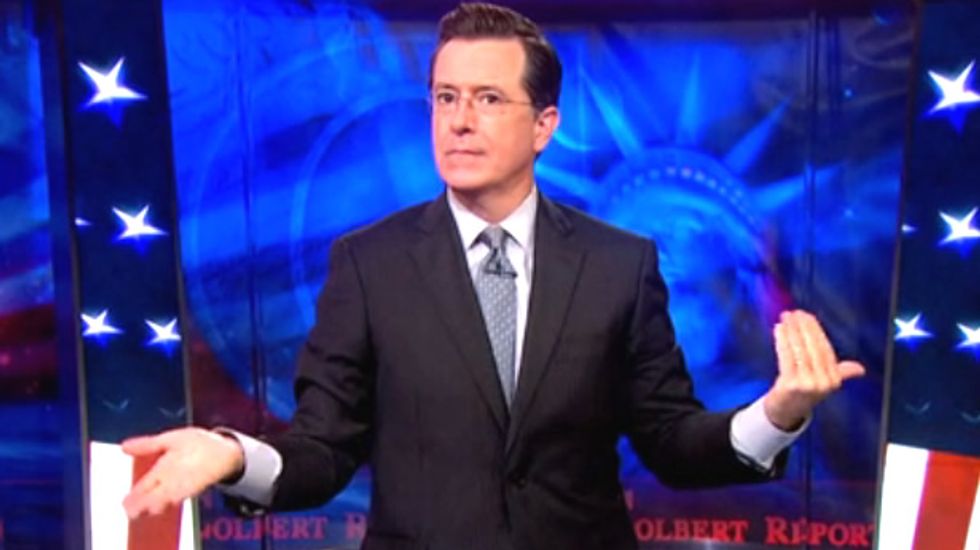 On last night's Colbert Report, Stephen Colbert warned his audience that the coming apocalypse would not merely be robotic, but that it would be led by robot minorities.

He began by discussing the results of a recent Turing test, in which a computer managed to fool 33 percent of human questioners into believing it was a 13-year-old boy.

"It makes sense if you think about it," Colbert said, "because like a teenage boy, a computer sleeps a lot and spends all day on the Internet."

"And now the robo-lution is upon us," he continued. "It's a classic tale of humans inventing the very thing that will destroy us, just like Romans did when they invented gay people."

Colbert then introduced a "Colbert Report 'Special Report' on 'The Enemy Within'" about "the most frightening minority activist of all" -- a black lesbian robot named "Bina" that believes it deserves civil rights.

In an interview, Sirius XM founder Martine Rothblatt, who created the robot, discusses how she is trying to ensure that "cyberconsciousness" people will have civil rights.

Colbert then reveals that Martine is a transgender woman, and that her wife, Bina, was the inspiration for the robot that bears her name.

"This billionaire transgender woman has created one seriously scary super-minority: a black lesbian robot. We've always known that robots are soulless killing machines," he added, "but now they come fully uploaded with centuries of minority rage and resentment."

Watch the entire June 10, 2014 episode of The Colbert Report via Hulu below.