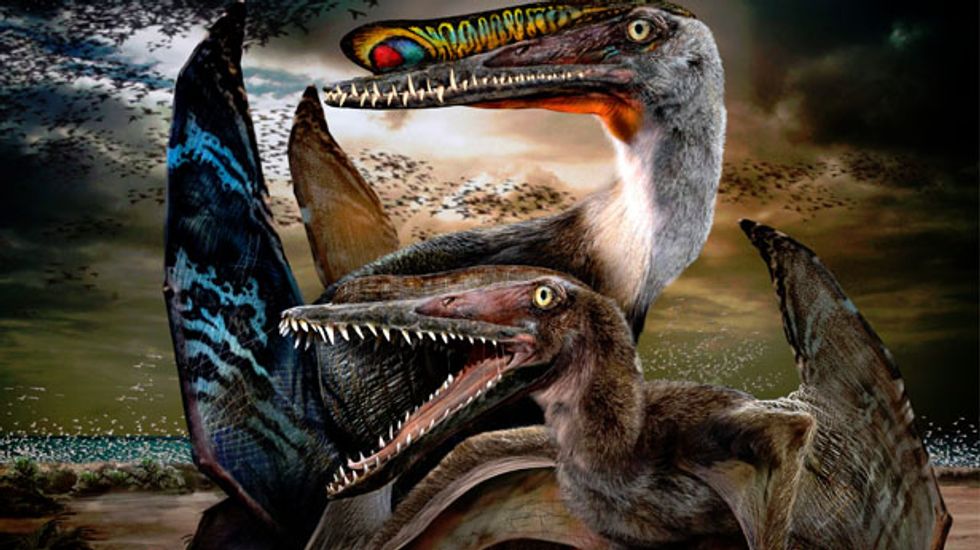 WASHINGTON (Reuters) - A spectacular fossil find in China - a prehistoric egg extravaganza from 120 million years ago - is providing unique insight into the lifestyle and gender differences of pterosaurs, the flying reptiles that lived alongside the dinosaurs.

Until now, only four pterosaur eggs had ever been found, and all were flattened during the process of fossilization.

But Chinese scientists said on Thursday they had unearthed five pterosaur eggs preserved beautifully in three dimensions at a site in northwestern China that also includes no fewer than 40 adult individuals of a newly identified species that lived in a bustling colony near a large freshwater lake.

"This is definitely the most important pterosaur site ever found," said paleontologist Zhonghe Zhou, director of the Chinese Academy of Sciences' Institute of Vertebrate Paleontology and Paleoanthropology.

The creature, Hamipterus tianshanensis, had a crest atop its elongated skull, pointy teeth for catching fish and a wingspan of more than 11 feet (3.5 meters).

The five oblong eggs were "pliable" with a thin, hard outer layer marked by "cracking and crazing" covering a thick membrane inner layer, making them resemble the soft eggs of some modern snakes and lizards, said paleontologist Xiaolin Wang, another of the researchers.

"They are the best-preserved pterosaur eggs ever found," Wang said.

The site was remarkable for what it reveals about how pterosaurs lived. At least 40 male and female individuals have been identified, and there may be hundreds in all, Wang said.

The site indicates pterosaurs lived in large colonies, in this case nesting near the lake and burying eggs in moist sand to prevent them from becoming desiccated, Wang said.

"One of the significant (aspects) of this discovery - hundreds of individuals and eggs together from one site - is that it confirmed that pterosaurs were gregarious, and the population size is surprisingly large," Zhou said.

"In Hamipterus, size, shape and robustness are decided by the gender," Wang said, adding that this contradicts a previous notion that "sexual dimorphism in pterosaurs was only reflected in the absence or presence of the crests."

The site, discovered in Xinjiang province in 2005, was preserved probably after the Cretaceous period creatures perished together in a large storm, Zhou said.

Pterosaurs were Earth's first flying vertebrates, with birds and bats appearing much later. They thrived from about 220 million years ago to 65 million years ago, when they were doomed by the asteroid that also killed the dinosaurs.

Knowledge about pterosaurs has been spotty, with their fragile skeletons not lending themselves well to fossilization. Little has been known about their behavior.

"I have been truly amazed by the abundance of bones and the number of eggs as well the great potential of more discoveries from the site," Zhou said.

The study appears in the journal Current Biology.

(Reporting by Will Dunham; Editing by Jonathan Oatis)