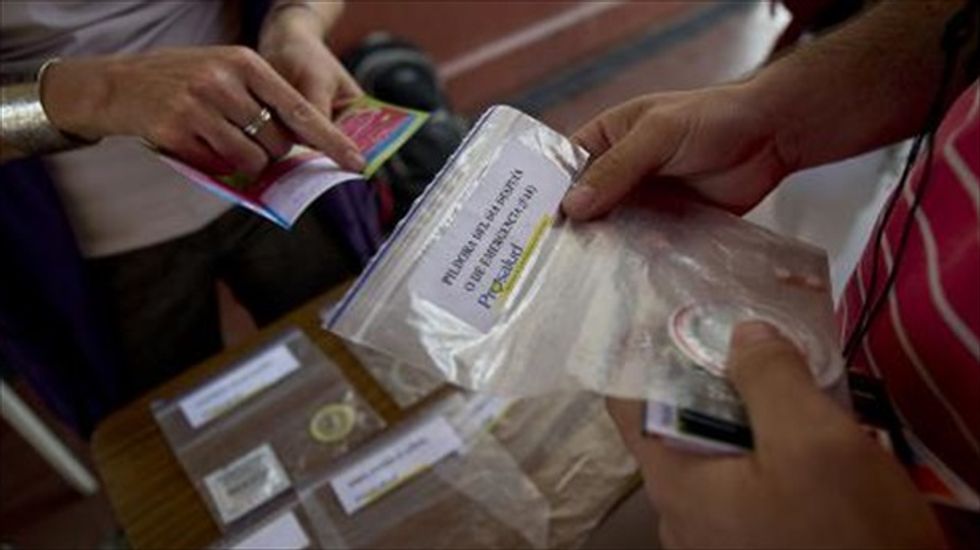 A midwife hands out condoms and gives sexual information to students at a university in Santiago, on April 11, 2012 [AFP]

Last month, a 17-year-old girl turned up at a Santiago public hospital near death from bleeding. A doctor at the hospital called police to report her: she had had a back-alley abortion, which is illegal in Chile.

Police searched the girl's home and reported finding blood-stained underwear. Prosecutors say that she is facing 3.5 to five years in prison.

In recent years, cases like hers, or that of Belen, an 11-year-old raped by her stepfather, have rocked Chile's traditional and overwhelmingly Roman Catholic society.

Others like journalist Monica Perez have to go forward with a pregnancy knowing full well the baby would not live.

The socialist president, a pediatrician by training, has announced that she will try in her second term to take on an admittedly taboo issue in one of the few countries where abortion is not permitted under any circumstances.

"Chile needs to engage in a mature and informed dialogue... on a bill" in Congress to legalize abortion in cases of rape, risk to the patient's life and non-viable fetuses, Bachelet has said.

Bachelet's proposal "includes three situations that are quite extreme, and (most national) laws around the world already include them," said Cristobal Bellolio, an analyst at Universidad Adolfo Ibanez.

And despite Chile's resistance to the practice, abortion is part of daily life here. The health ministry estimates that about 150,000 abortions are performed illegally every year in the South American nation of 17 million.

And more alarmingly, "every single month, we have three of four women die from abortions" due to illegal and drug-induced operations, Bachelet said last month on Mega television.

Most women in Chile who abort do so by ordering medications online that will cause contractions or disrupt hormonal functions.

"The government has to stop this black market, and debate a bill on legal abortion, because we don't want more people dying, or more people misinformed," said Anita Roman of the Matronas association.

Before 1989, Chile sometimes allowed abortion when the fetus was not viable or a pregnancy endangered the patient's life.

But toward the end of the Augusto Pinochet 1973-1990 dictatorship, it was banned across the board. Divorce was only made legal in Chile in 2004.

The Roman Catholic Church, a key political player for decades in Chile that is now losing followers and influence, was outraged by the president's remarks.

The government has said that debate on the issue will start in Congress before year's end.

"Chilean society has evolved in terms of its values. It has become a better educated society, with more access to information and that is more interested in personal freedoms," Bellolio said.

Two years ago, a conservative-held Congress refused to debate abortion reform. Now, Bachelet's political allies hold sway, so the debate will go on, and promises to be thorny.

The Christian Democrats for the first time agreed to debate abortion in cases of non-viable fetuses and when the patient's life is in danger, but it was not clear if they would add pregnancies from rape to the list.

During her first term in office, Bachelet fought mightily to make available the "morning after" pill, which remains difficult to obtain.

That scenario could repeat itself again with potentially legal abortion.