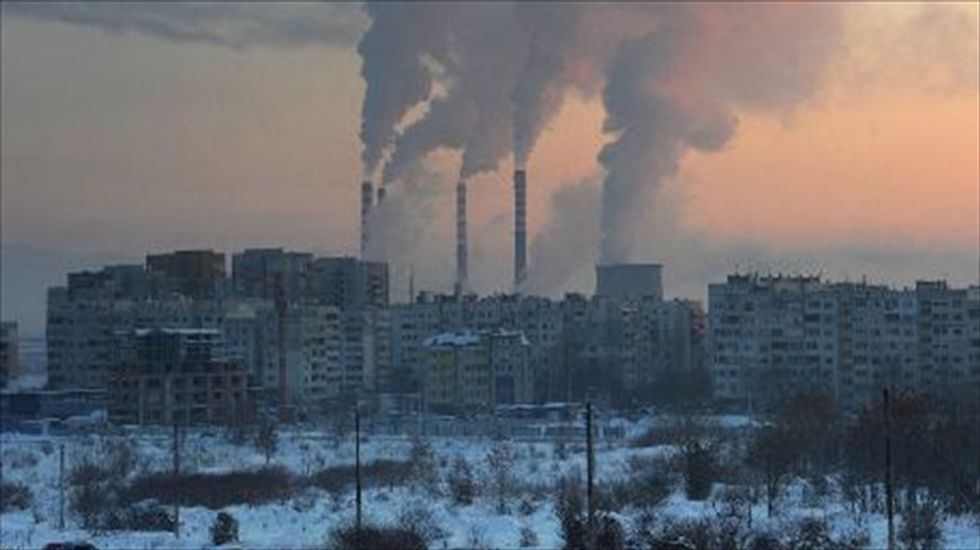 The sun rises behind chimneys of a thermal power station in Bulgaria on Jan. 31, 2012 [AFP]

The porous substance can cheaply separate CO2 at wellheads and safely store it for industrial use or for re-injection into the gas field, they said.

Current processes for removing CO2 involve chemical scrubbing, a costly procedure in which the carbon in natural gas is dissolved into corrosive liquid compounds heated to 140 degrees Celsius (284 degrees Fahrenheit).

The new material comprises a carbon powder, studded with microscopic holes and infused with nitrogen or sulphur atoms, which turns CO2 gas into solid chains of polymer molecules.

The polymers become trapped in the material's pores, while the natural gas is let through.

This "polymerisation" happens under the pressure released naturally from the wellhead, the team behind the invention wrote in the journal Nature Communications.

Once the pressure disappears, the polymers revert to their original gassy state, freeing the pores so that they can collect more carbon gas.

This all happens at normal temperature, unlike existing capture technology which requires heat and uses up much of the energy being produced, according to the team.

Study co-author James Tour, a professor at Rice University in Texas, told AFP by email that CO2-capturing materials already existed, "but none that work like this and can be made so inexpensively."

The new method is used at source, meaning the gas does not have to be transported to a collection station for the CO2 to be removed, a press statement from Rice University said.

"Natural gas is the cleanest fossil fuel. Development of cost-effective means to separate carbon dioxide during the production process will improve this advantage over other fossil fuels," it added.

The breakthrough should also allow the use of gas whose high content of CO2 would make it prohibitively costly to clean using current capture technologies.

With the new method, which is patented but not yet in use, CO2 can be pumped directly back into the gas well, where it had been for millions of years, or packaged and sold for other industrial applications, said the team.

CO2 is the most abundant man-made "greenhouse gas."

Billions of tonnes of these gasses are being emitted each year, acting like an invisible blanket trapping solar energy in the atmosphere and damaging Earth's delicate climate system, with potentially catastrophic risks, say experts.

A car running on natural gas produces about 30 percent less CO2 than on petrol, said the study.

But the CO2 released at the gas well itself "significantly" offsets this advantage, it added.