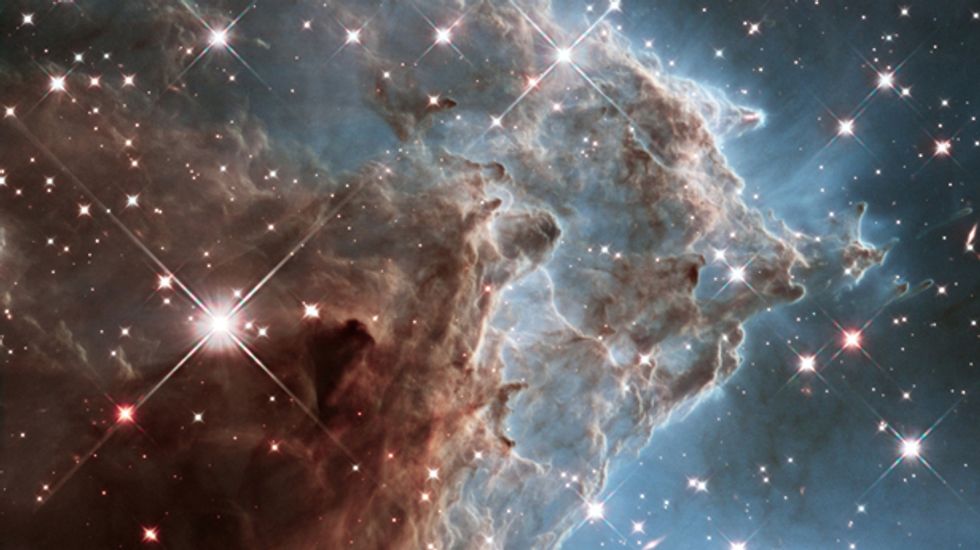 Shortly after lunch on Thursday afternoon the silence of the Atacama desert in Chile will be rudely disturbed by the dull crack of dynamite sending a rush of mountain rock skywards.

The explosion, planned for 2pm local time (7pm BST), marks the start of a month-long project to lop the top off the 3,000m-high Cerro Amazones. Once the dust has settled and the rubble has been cleared, the mountain will be smaller, flatter, and ready to host the largest optical and infra-red telescope in the world.

The European Extremely Large Telescope, or E-ELT, will serve astronomers and cosmologists for generations to come. Size, as the name implies, matters. Some 2,500 tonnes of steel rigging are on order to hold a primary mirror nearly 40m wide. That is large enough to see the faintest light from the earliest stars, and signs of life on planets far beyond our solar system.

"Today we cannot even imagine what will be discovered with this facility," programme manager Roberto Tamai told the Guardian from his office in the Chilean desert. "I feel excited. We are opening a highway for the future knowledge of astronomy."

The telescope is the latest and most ambitious project for the European Southern Observatory [ESO], a multinational organisation of which Britain is a leading member. The UK has invested £88m in the E-ELT and will have a key role in the construction and operation of the telescope, and the advanced instruments it will carry.

But first the jagged peak of Cerro Amazones must be tamed. The mountaintop needs to be broken apart and bulldozed to a plateau large and strong enough to hold the enormous observatory. Perched on top of the reshaped mountain, the €1.1bn E-ELT will have near-perfect conditions for observing the heavens.

Cerro Amazones is not the first mountain to be decapitated in the area. Twenty kilometres away, across the B710 which cuts a lonely route through the desert, is Cerro Paranal. Engineers from the ESO cut that peak down to size some years back to build another facility, the Very Large Telescope (VLT). They will use the same procedure this time: blast and clear, blast and clear. In the coming months, more than half a million tonnes of rock will be removed from Cerro Amazones, leaving it 18 metres shorter.

Scientists and engineers will watch the first blast on Cerro Amazones from the safety of Paranal. The event will be filmed and streamed live on the web from 6pm to 8pm BST, though images from cameras closer to the action may take a day or two to release.

Work in the desert can be a hard slog. The humidity is down around 10%, making the air extraordinarily dry. The hotel at Paranal has a swimming pool in the lobby and for very good reason. "You can swim in it if you like, but the point is to keep the humidity at a bearable level. If you sleep for eight hours in 10% humidity, you are almost dead by the time you wake up because you breathe out so much moisture," said Joe Liske, an astronomer at the E-ELT science office.

The low humidity is not the only problem for the 100 or so ESO staff at Paranal. Dust gets everywhere, in your shoes, your glasses, your car. The desert hues, shades of pinky, orangey brown, are monotonous. People come to crave a view of the sea, and the green of plants, entirely absent from the desert. Then there are those missing loved ones back home. "There's a lot of sacrifice. Your private life goes ga-ga," said Tamai.

The E-ELT will take a decade to build. The telescope's huge mirror is too large to make from one piece of glass, so engineers will combine 798 smaller hexagonal mirrors, each of which can be moved independently. The E-ELT has a system called adaptive optics that can shift the mirrors in real time to counteract the blurring effects of the atmosphere. "We need to be able to adjust each one to get the perfect shape for the primary mirror, and that has to happen at all times to get the best possible image quality," Liske said.

When the telescope is operational, around 2024, astronomers will point it at Earth-like planets orbiting sun-like stars in far away solar systems. So far, scientists have made only the most rudimentary measurements of these planets, but E-ELT could change all that. "We want to study the atmospheres of planets that are just the right distance from their stars that life might form on their surfaces. The goal is to try to say whether life might exist on some of these planets," said Liske.

A planet's atmosphere can hold numerous signs of life. The E-ELT will look for infrared signatures of methane, released by much of life on Earth, and other gases such as oxygen and carbon dioxide. The telescope could even pick up direct signs of life, such as chlorophyll found in vegetation.

The telescope will have many more uses though, many not yet dreamed up. In 2011, scientists shared a Nobel prize for work on supernovae, or exploded stars, that revealed how fast the universe is expanding. Isobel Hook, an astrophysicist at Oxford University who works on E-ELT, hopes to use the telescope to observe more distant supernovae. "We'll be able to see supernovae much further away, and so map out the expansion of the universe to much earlier times," she said. "The E-ELT is really the next big step for astronomy everywhere."

Allies are standing in support of Meghan, the Duchess of Sussex, after the recent revelations that Prince William's godmother, Lady Susan Hussey had a racist exchange with Ngozi Fulani, of the community initiative Sistah Space.

The high-ranking Buckingham Palace pal has resigned since the incident became public, but the exchange is just another in a line of racist incidents coming from the British Royal Family.

Stanley Woodward is a veteran attorney who has recently taken on clients ranging from Jan. 6 rioters to ex-Trump aides, making him "the most prolific Trump-world warrior you’ve never heard of," according to a new report from Politico.

"Those who know Woodward say Trumpian figures are drawn to him precisely because he’s what many lawyers who end up in Trump circles are not," Politico's report states. "He’s neither a bomb-thrower nor a headline-seeker. He’s a law nerd in a world of political operatives. And it’s the separation he has from the Trump loyalty-at-any-cost mentality that’s made him in demand among MAGA figures embroiled in the legal morass that followed Trump since Jan. 6."