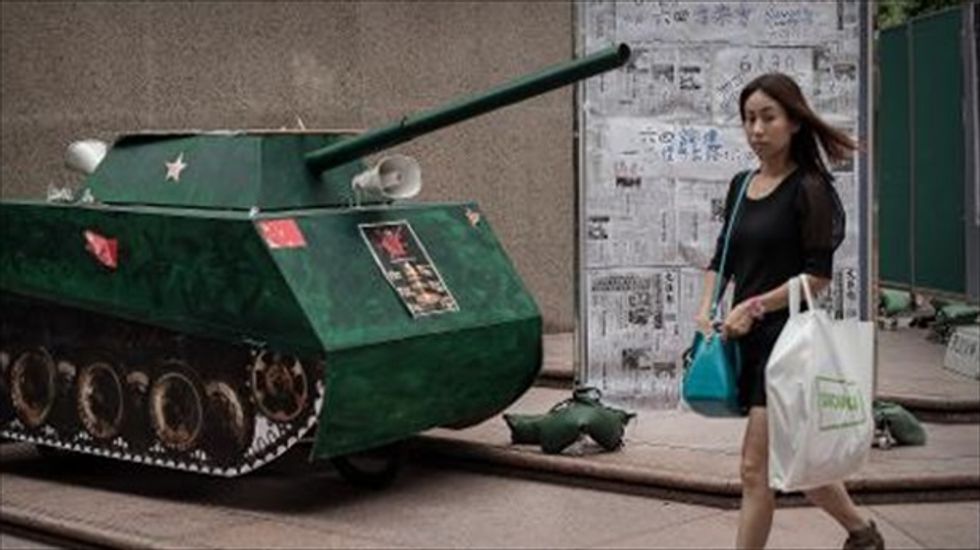 A woman walks past a tank replica displayed to symbolise China's 1989 Tiananmen military crackdown in Hong Kong on June 3, 2014 [AFP]

Up to 200,000 people are expected to take part in a candle-lit vigil in Hong Kong Wednesday to mark the 25th anniversary of the violent Tiananmen Square crackdown -- as China seeks to wipe the incident from memory.

Every year tens of thousands of Hong Kong residents congregate in the city's Victoria Park in a solemn ceremony to mark the events of June 3-4, 1989, when the military brutally crushed pro-democracy protests in central Beijing.

This year is expected to draw unprecedented numbers to the vigil, including an ever-larger cohort of mainland Chinese who travel to Hong Kong, the only place in China where the Tiananmen anniversary can be commemorated openly.

"The anger and the tears around the massacre are still very fresh," Lee Cheuk-yan, chairman of organisers The Alliance in Support of Patriotic Democratic Movements of China, told AFP.

"The emotions around the 1989 democracy movement represented a beacon of hope and then the massacre represented despair. When people go through that, you can never forget," Lee said.

Hundreds of people -- by some estimates, more than a thousand -- died after the Communist Party sent in tanks to crush demonstrations in the square at the heart of Beijing, where student-led protesters had staged a peaceful seven-week sit-in to demand democratic reforms.

In China, where public discussion of Tiananmen is forbidden and online references to it heavily censored, many remain ignorant of the events of 25 years ago.

A third of China's population alive today was born after the incident, while many who lived through it are hesitant to broach the sensitive topic.

Historians and analysts say that young Chinese in particular are largely unaware of the incident, adding to the significance of the annual vigil in Hong Kong.

"There is a distinct danger that they don't know enough (about the incident) and they may not be very interested," Joseph Cheng, professor of political science at City University of Hong Kong, told AFP.

"Tens of hundreds of thousands of people in Hong Kong can challenge the authority, to condemn the massacre. I think it is very significant that we can speak out for the voices inside China," Lee Cheuk-yan said.

Since returning to Chinese rule in 1997, Hong Kong has retained a level of civil liberty far greater than the mainland under the "One Country, Two Systems" policy, which guarantees the city's semi-autonomous status.

Lee, who was at the Beijing Hotel overlooking the square during the crackdown, described it as the "darkest hour" of his life.

"When I saw Tiananmen Square, I remember the moment when the lights of the whole square suddenly switched off and it was total darkness, and then you hear gunshots," Lee said.

"At that moment I would describe it as the darkest hour of my life, when you believe that thousands of students are being suppressed by the soldiers and you don't know what happened to them, and whether they will be killed."

The world's first museum commemorating the victims of the crackdown opened in Hong Kong in April in the lead-up to the anniversary.

The 800-square-foot (74.32-square-metre) venue features video clips and photographs and a two-metre tall statue of the Goddess of Democracy, similar to one erected at Tiananmen Square during the 1989 protests.