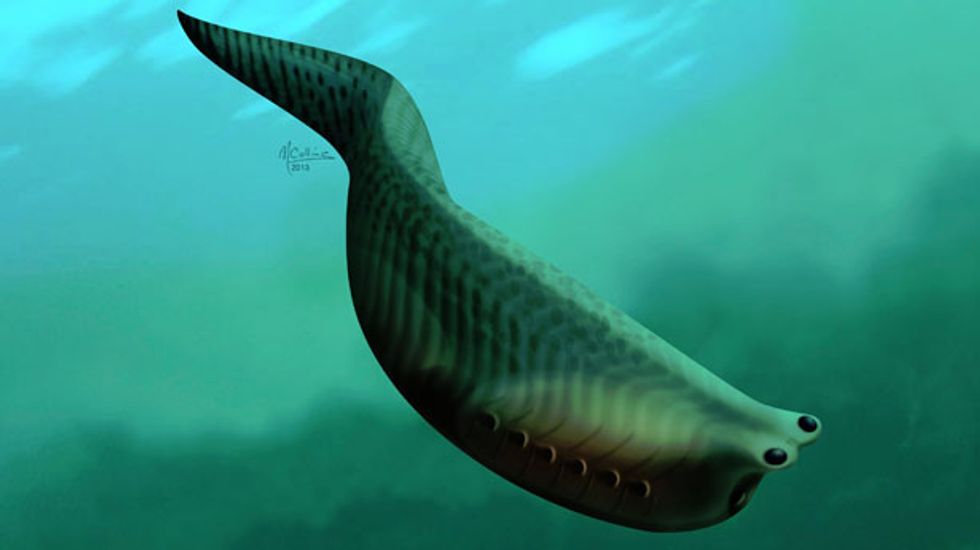 WASHINGTON (Reuters) - This is certainly not just another fish tale.

A tiny jawless fish that lived more than half a billion years ago is providing scientists with a treasure trove of information about the very dawn of vertebrate life on Earth.

Researchers on Wednesday described about 100 fossil specimens of the fish unearthed at the Burgess Shale site in the Canadian Rockies and other locales, many exquisitely preserved showing the primitive body structures that would later evolve into jaws.

The fish, Metaspriggina, lived about 515 to 500 million years ago amid the astonishing flourishing of complex life during the Cambrian Period. While two fragmentary specimens had been found previously, the new ones revealed unprecedented detail about one of the earliest known vertebrates.

Creatures like Metaspriggina began the lineage of vertebrates - animals with backbones - that later would include the whole range of jawed fishes, amphibians, reptiles, birds and mammals including people.

"It allows an understanding of where we come from and what our most distant relatives might have looked like," said Jean-Bernard Caron, a paleontologist at the Royal Ontario Museum in Toronto. "Because of its great age - more than half a billion year old - Metaspriggina provides a deep down view at the origins of the vertebrates."

Metaspriggina was a soft-bodied jawless fish no bigger than a person's thumb - about 2-1/2 inches (6 cm) long, with a small head, a narrow, tapering body, a pair of large eyes atop the head and a pair of small nasal sacs.

It did not have bones but possessed a skull possibly made of cartilage as well as precursors to vertebrae and a skeletal rod called a "notochord" that provided body support like backbones would do in later vertebrates. It is unclear if it had fins.

The scientists were especially excited about the gill structure of the fish because of the preview it gives to the anatomy of later vertebrates - paving the way for the jaws that would open a world of possibilities for so many later creatures.

Metaspriggina boasted seven pairs of rod-like structures called gill arches, or branchial arches, that functioned for both filtration of food particles and respiration. The first pair of these gill arches was more robust than the others and presaged the first step in the evolution of jaws, Caron said.

Scientists have known about the importance of these arches in the evolution of vertebrates but had never before been able to see such an early example.

"Metaspriggina is important because it both fills an important gap in our understanding of the early evolution of the group to which we belong, but in particular shows with remarkable clarity the arrangement of the so-called branchial arches," University of Cambridge paleontologist Simon Conway Morris said.

Part of the jaw bones eventually evolved into tiny middle ear bones in mammals, Caron added, noting that the evolution of these arches "had a profound impact on how vertebrates look, live and function today."

The study was published in the journal Nature.

(Reporting by Will Dunham; Editing by Tom Brown)